A Trip to “The Visiting Room” 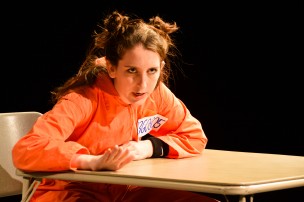 Fairy tales, love stories, tragedies, and comedies are all theatrical genres and subjects to which we are accustomed. But every once in a while, theater hosts the voices of those who are unheard yet deserve to be heard most. Here at Wesleyan, theater is pleasantly unconventional in that even the most marginalized characters are given a chance to speak. This is the fundamental idea behind “The Visiting Room,” a thesis in Theater written by and starring Sara Guernsey ’15.

“I believe that everyone has the right to be heard,” Guernsey said.

“The Visiting Room” is a platform for voices that are typically silenced: it tells the stories of prison inmates in their own words. Each inmate was carefully and precisely selected in order to represent thousands of inmates. They each offered a new perspective by sharing their experiences and feelings.

The CFA Theater Studio, a space normally reserved for acting classes and rehearsals, was completely transformed for this production. A room usually flooded with numerous warm lights, it was darkened, with only a few light bulbs hanging over the tables placed in the room that were meant to represent the inmates’ designated visiting tables. A projector hung from the ceiling, projecting the names of the inmates, their crimes, and the length of their sentences on a wall in front of the audience. The entire setting was transformative and quite effective for a 40-minute show; it also boasted an unconventional sense of welcomeness. During the show, each table was lit by the light bulb hanging above it, welcoming an inmate whose story was a spark begging to be noticed in the midst of complete darkness.

As for the acting, Guernsey did justice to every character she represented, male or female, depressed or enthusiastic, sad or happy, lively or despondent. Guernsey lived in the moment and created each instant with such attention to detail that it eventually became difficult to realize that all the unique characters viewers got to know, and perhaps sympathize with, were portrayed by a single performer.

Due to the sensitivity of the overall theme and materials used in this production, discomfort was inevitable. The audience was composed of people who had different backgrounds and varying experiences from those who have been imprisoned for a crime, yet I never felt more discomfort than I was expecting. An important aspect of this production that contributed to the relationship between the spectators and the performer was that Guernsey didn’t dive right into the characters and their stories: she started the show by talking to the audience and offering them brief statistics about the demographics of the current prison population in the United States.

During the show, she constantly maintained her connection with the audience.“The Visiting Room” was an interactive experience, through which the audience gained insightful knowledge of those who go unseen and unheard.

Despite its complexity, “The Visiting Room” was deeply honest. At first, I entered the room ready to question the motives and rationales behind each character who would claim to deserve more or be treated differently. I not only noticed that my entire assumption was based on imaginary facts and conservative theories but also left the CFA Theater Studio filled with satisfaction. I may never be able to help any of these inmates, but I now have a much clearer perception of who they are. As Guernsey said, “They’re not all monsters.”