“Queen of the Sun” Documentary Examines Buzz About Disappearing Bees 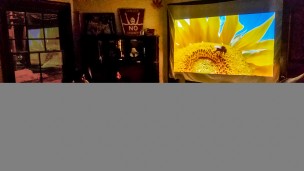 The Climate Ambassadors and the Wesleyan Beekeepers Club came together on the evening of Wednesday, Feb. 18 to host a screening of the 2010 film “Queen of the Sun.” The documentary brings together beekeepers from around the world to try to explain the story of bees, their history, and the bee crisis that is affecting us today.

Matilda Ostow ’17, one of the heads of the Wesleyan Beekeeper Club, became interested in bees after interning and working at a honey store. After spending time there, she found out about the movie and the importance of bees.

“Bees are very, very important for humans and for natural ecosystems in general,” Ostow said. “They pollinate over one-third of the world’s food supply.”

“We really wanted to connect with the environmental aspect of bees,” Ostow said. “One of the main reasons right now that they are suffering is because of environmental problems: pesticides, monoculture, and lack of biodiversity and habitat.”

Aly Raboff ’16, one of the Climate Ambassadors, said that the world of bees contains many components that are essential to the environment.

“I think a huge part is that bees are interconnected with everything agriculturally, and so if they’re gone then it’s going to affect so much,” Raboff said.

“Queen of the Sun” contains interviews with a variety of beekeepers, including organic beekeepers who use only organic substances to maintain their beehives, in contrast with most commercial beekeepers who use substances such as high fructose corn syrup to energize their bees for pollination. It also contained a discussion with people who run backyard or rooftop beehives.

“[When] people say they can’t keep bees, they’re lying,” asserts one of the rooftop beekeepers in the movie.

Ostow further commented on this.

“Commercial beekeeping is a big mess,” Ostow said. “Sometimes they just feed their bees corn syrup and it’s so unhealthy. There’s [also] a lot of disease. It’s horrible for the bees, so they’re not making good honey, and it’s just not fun at all.”

Colony Collapse Disorder (CCD) has proven to be a major crisis for the bee population, with bees seemingly disappearing altogether. As shown in the documentary, hypotheses for this occurrence range from death by pesticides to the increase in commercial beekeeping.

According to Raboff, joining different student groups together creates a way for them to reach out and spread awareness about certain issues to a wider audience.

“Us as groups, have these similar things that we’re striving towards,” Raboff said. “I think film screenings are an easy way to spread [the] word about things. In general [they are] pretty good events to have where people who aren’t involved in issues and watch the film are hopefully inspired to join the group, or take some sort of action or spread awareness.”

The movie was well received by the audience members, who gave a round of applause when the movie began to roll its credits.

“It was pretty informative and showed a spiritual connection with bees, which I found interesting,” Pelton said. “I thought [beekeeping] was always sort of commercialized and moneymaking. I’ve never really seen this organic side of it, with the organic farmers and how they really felt a connection with the life cycle of a bee.”

The movie also raised hopes about spreading awareness of bee issues at the University and beyond.

“[The movie] gave me more hope than I had before,” said Eva Moskowitz ’18, a member of the Beekeeper Club. “We kept hearing about colony collapse and how detrimental it was to this country and eventually to the world, and I think it’s exciting that people think there’s something that can be done.”

After the death of two of the Club’s hives over the winter break, Ostow hoped to get more people interested in beekeeping and raising awareness about CCD.

“This is the way to introduce [bees] as something beautiful, and just have people learn a little bit more,” Ostow said. “Maybe [they’ll] be interested and want to learn more, or teach other people, and it’s all just about passing around information and raising awareness.”