Slick Fight Scenes and Acting Fail to Save “Kingsman” 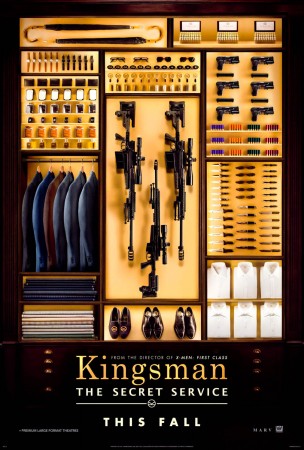 It’s difficult to say exactly what Matthew Vaughn’s “Kingsman: The Secret Service” is trying to be. From its marketing campaign—which seems to posit a future in which SkyMall were to become a military contractor, churning out only the flashiest and most gimmicky tools of bloodshed—the film seems to position itself as a sort of “James Bond” by way of Quentin Tarantino. Unfortunately, by the closing credits, it’s far easier to see the picture as a sort of “Agent Cody Banks” by way of the queasy sum of every misogynistic, racist, classist, and bloodthirsty impulse that has haunted the dregs of action cinema since its inception.

The result is a film that pleads subversion while endorsing all too present ideas about masculinity, violence, and sexuality, certain that, because it is slick and without the decency to bury these concepts in the way of its predecessors, there is something revolutionary in how revolting it manages to be over the course of its two hour running time. “Kingsman” is a punchy vehicle for oversimplified, underwritten, exhaustively ugly, and superficially manic genre tropes. In other words, it’s adapted from the work of comics writer Mark Millar.

On the one hand, it seems preferable to simply say that there is absolutely no reason to see this film—best case scenario, you despise it and feel cheated; worst case scenario, you reckon with being able to overlook its almost comic moral failures—and leave it at that. On the other, “Kingsman” is so lacking in conscience, brains, or sense of context that it almost demands to be discussed at length. Were it the sort of picture that championed itself as morally reprehensible in the way of films like “A Serbian Film,” it might be easier to outright dismiss. That it boasts the names of talented actors and a gifted director, announces itself as mainstream medium-size blockbuster fare, and has thrown its trailer so desperately in the faces of audiences makes it especially puzzling. This is not an “I Spit on Your Grave,” existing solely to push viewers to the limits of physical and intellectual nausea. This is studio picture, setting out to make money, to sell tickets, and to reach a wide audience. This is not Eli Roth, director of “Hostel.” It’s Matthew Vaughn, director of “X-Men: First Class,” making torture porn look positively progressive.

“Kingsman” (based on Mark Millar’s somehow less grotesque graphic novel) tells the story of Gary “Eggsy” Unwin (newcomer Taron Egerton), a young British punk who is recruited by super spy Harry Hart (Colin Firth, in a performance that deserves not just a better movie, but a better world where this movie would not be made) of the Kingsmen, a secret paramilitary organization composed entirely of stuffy old white men with unlimited power and no government oversight. As fate would have it, Gary’s father was one of these Kingsmen (who are, I guess, the good guys), and Hart is still broken up over having been unable to prevent his death in a mission-gone-awry in the Middle East. Not long after his recruitment, Gary and company face off against Richmond Valentine (Samuel L. Jackson, lisping his way through the film), a technology tycoon who plans on saving the planet by eradicating humanity. Jackson tries to have fun and bring some lightness to his turn, but there’s something so unnerving about the film’s Old White Dudes in Suits vs. Black Man in Flat Brimmed Cap conflict that even the actor’s most gonzo attempts to add levity to the situation are quickly squashed.

It’s difficult to say how aware of its flaws “Kingsman” is, and whether the answer even matters. Vaughn, who wrote the screenplay alongside frequent collaborator Jane Goldman, is not new to adapting Millar’s work. In 2010 he directed “Kick-Ass” from a script he wrote with Goldman, managing to alleviate some of the more problematic elements of its source material through a far more generous sense of humor than “Kingsman” seems remotely capable of possessing. “Kick-Ass” was by no means a flawless film—its central romantic relationship was a beehive of bizarre homophobia and manipulation—but it also reached for moments of strange tenderness and a genuine sense of fun. “Kingsman,” on the other hand, rarely seems interested in anything beyond the implicit poison of its premise (and the more explicit strains present in its execution), and the moments of trademark Vaughn style only serve to exacerbate how deeply troubling the film’s action ultimately is.

If “Kick-Ass” was interested in at least attempting to hold a mirror up to the disturbing elements of the superhero fantasy (with varying levels of success), “Kingsman” seems determined not just to self-destruct in a blaze of regressive fetishism, but to infect the entire genre that it sought to engage. There’s no satire present in the conventions it exploits, no dialogue and no self-awareness. Rather, the film seems to aim for mean-spirited escalation, and moments that might actually allow critics to use words like “fascist” unself-consciously. Even with a fun soundtrack, some game performances, and well-choreographed fight scenes, “Kingsman” cannot allow itself to shrug off its displaced aggressions, as though it were attempting to emulate the chip-on-the-shoulder smarm that its protagonist wields so shamelessly. All of this compounds in a finale that is so ugly, so unspeakably stupid, and so absurdly proud of itself that, even if the film were to reach brilliance for its first 90 minutes, would crush any hopes of redemption available to “Kingsman.”

“Kingsman” never promised to be anything brilliant or subversive, but the film’s reckless disregard for any of its characters, concerns, or influences is something so uniquely nauseating as to set the film apart in the most unpleasant of ways. To think that this film came from the same director as “X-Men: First Class”—which boasted moments of humanity, humor, and capable subtext—is absolutely baffling. The resulting film is ugly in ways that few films dare to be, touting its slapstick heartlessness as something bold, when it is actually anything but. It’s a failure of a film in nearly every way, and it’s an experience so deeply degrading to its audience that even hate-watching would give “Kingsman” too much credit. For all of the shiny gadgets (grenades, laser watches, sword legs, machine gun umbrellas) the film deploys, it would have been nice to think the old white dudes who this film lets police the world could have dreamed up a better script, or a sense of perspective, or a functional moral compass.