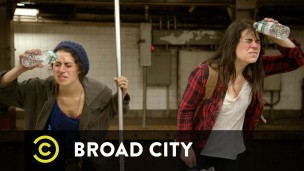 It’s a frustrating truism that you can’t really explain a joke without losing the humor. Pointing out the mechanisms, no matter how impressive they are, just renders them ineffective. Sure, you may still have a smart piece of comedy, but it seems to operate from behind glass: appreciable but not quite engaging.

This is the primary difficulty in discussing “Broad City,” which recently began its second season on Comedy Central. Based on premise alone—two young women get into all sorts of crazy situations in New York City—the show sounds depressingly rote: yet another opportunity to watch two people have more fun than you. Yet as a result of many finely tuned gears, the show manages to be the exact opposite: it’s bold, unflinching, eminently quotable, whip-smart, absurd, raunchy, and warmhearted. “Broad City” is potentially the best comedy show of the last three years, and I’m terrified I’ll ruin it in telling you why.

It’s been a pretty great half-decade for the 30-minute comedy on television. In addition to old standbys like “South Park,” networks have hosted legions of sharp programs, from “Parks and Recreation” on NBC to “It’s Always Sunny in Philadelphia” on FXX. As the years have passed and these shows have grown, they’ve gotten bolder and stranger. They’ve become more comfortable, going to absurd and dark places that seemed impossible in early seasons. The comedy is evolving rapidly, and with reverence and verve, shows have made the most of their medium and made television an even weirder place. It’s a blessing of the highest degree. It’s also what has allowed “Broad City” to exist.

“Broad City” is rooted in familiar territory: 20-somethings experience the pitiless wonder of young adult life in a major American city. The show’s humor ranges from sex and drugs to the inability to figure out what one wants from life, or what it means to be a grown-up. All very standard. What sets “Broad City” apart is how far it’s willing to go with its stories and characters.

When “Girls” first premiered on HBO, the show was praised for its willingness to go to uncomfortable places, to make sexual situations wacky and unappealing, to put characters through the unflattering oddities of existence. Yet by the time this season rolled around, the image of Alison Williams getting rimmed over a kitchen counter just felt sort of bland. It seemed as if all the boldness had been sucked out of the room, and Lena Dunham and company were left with a one-off moment that they had to pray would have enough shock value to catapult the show forward. Part of what has kept “Broad City” from reaching this point is the program’s commitment to its bits and its crudeness.

Abbi Jacobson and Ilana Glazer—the show’s stars and writers—are willing to carry on longer than normal or necessary with a bit, and to let a gag unfold, refold, and unfold again so that every little quirk is unearthed. When, in the most recent episode, one character is put in an unusual sexual position, Jacobson and Glazer are not content to simply let the situation comprise the entirety of the joke. Rather, that one image swallows up the rest of the episode.

This bawdiness might throw the show into chaos were it not for the incredible work that Glazer and Jacobson do as the program’s stars. Abbi and Ilana feel at once real and heightened, bouncing off one another and the terrific supporting cast to create one of the best dynamics on television today, period. There is warmth, affection, and dysfunction in their relationship, but not of the sort that resolves itself. No, the best episodes of “Broad City” are all about futzing with that central dynamic in ways that unsettle the status quo. And when an episode ends, there is never any pressure to realign. Maybe this is because it’s inconceivable for these characters to have any sort of stable baseline, or maybe it’s because each manic evolution feels so perfectly natural. Either way, the fact that the show can move so comfortably in the space between its leads—shifting their roles, letting their individual problems and features recklessly intersect—lends it a layer of fundamental warmth, a bargaining chip that “Broad City” thankfully refuses to treat as sacred.

Yet even that fails to touch on what makes the show so immensely entertaining and so potently funny. Perhaps it’s the ways in which New York City feels both familiar and alien onscreen: an intentionally messy collage of expectations, cultural symbols, ugly realities, and restless potential. Perhaps it’s the program’s commitment to self-awareness and conscience and the notion that its raunch and its progressiveness need not butt up against one another, and that it shouldn’t have to announce its politics or its humor shyly. Perhaps it’s that it’s the only show on television that can make a frozen yogurt store or a Whole Foods feel so amazingly disconcerting: the lovechild of Franz Kafka, Lewis Carroll, and some sleek corporate design. Or perhaps it’s just that, even with all the experimentation that has heralded it, “Broad City” still feels like it’s something that couldn’t possibly exist; it is brilliant, unstable, bizarre, and immediate. It’s a show that reaches far beyond any potential framework or explanation and still manages to feel wholly comforting and familiar. It’s the strangest thing. I couldn’t recommend it more highly.