After 42 years as a University librarian, Erhard Konerding plans to devote himself to his eclectic passions. 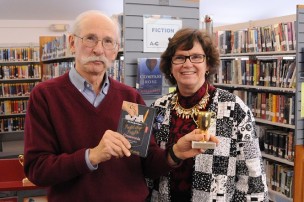 This Government Documents and Reference Librarian served as a faculty member for the Alpha Delta Phi society, a faculty advisor for various undeclared students, and frequently appeared on such TV game shows as “Jeopardy” and “Who Wants to Be A Millionaire?”

Who is, Erhard Konerding?

Correct! After 42 years of service to the University, Konerding, known not only as a beloved librarian but also as an avid outdoorsman and trivia buff, retired this January. Konerding spoke with The Argus about “Jeopardy” and “Millionaire,” his time at Wesleyan, his love of the outdoors, and meeting Wes alumni at crossword conventions.

The Argus: What are your plans now that you’re retired?

Erhard Konerding: Well, I’ve got so much stuff to do it’s ridiculous. First, there’s just all those projects that I was putting off, saying, “I don’t have time, I don’t have time.” Now, there’s no excuse anymore. I’m doing more fitness stuff, now that I have time for [it,] over at the gym. And I’ve become an outings leader for the Sierra Club. And that means I do stuff out of Hartford for students in city schools—take them out on hikes and stuff—and I’ve been leading national trips, service trips, doing trail work and stuff like that nationwide, mostly in the Mountain West, California and Idaho. And, starting this year, I’m going to start leading international trips. So that’s going to take up a lot of my time.

A: Where are you going for the international trips?

EK: To Spain this time. Northern Spain. I don’t know if you’ve ever heard of the Camino de Santiago. People used to do a pilgrimage, and some people still do, out to where supposedly St. James the Apostle is buried. Somehow, he wound up in western Spain. We’re going to visit some other sites—national parks and places—in Spain, and then do the last stretch of that pilgrimage. But not as religious pilgrims.

A: And you did some stuff with Wesleyan’s Outing Club as well?

EK: Yeah. Well, back many years ago, Wesleyan had an outdoor orientation the week before freshmen arrived at school. And we would go out to western Connecticut, hike on the Appalachian Trail, do rock climbing, ropes, and things like that. Wesleyan stopped that program, and they sold the [Great Hollow Wilderness] School. That’s all defunct now. But Outing Club does a smaller version of it, mostly with weekend-length trips, and I’ve led several of those.

A: So, what effect did that have while you were a librarian?

EK: Well, I got to see people that I spent a weekend, or sometimes four or five days, with and got to know reasonably well. One of the guys from my first trip in the 1980s, I’m still in touch with him. He’s actually local, and we’ve been keeping [in] touch the whole time, even though he’s been all over the place. [I’ve seen] others over the years. And it’s been nice.

A: You also had an appearance on “Jeopardy” and on “Who Wants to Be a Millionaire?”

EK: Yes, and a couple of other shows that aren’t as well known. There was one a couple of years ago that NBC had on as a live show, called “The Million Second Quiz,” [in] which there was no actual money to be won, except for several—three or four—people at the top of the hundreds and hundreds of contestants that they had. But I didn’t disgrace myself. So I was happy with that. And I’m friends with the winner, which is really funny. I knew him before from the quiz show and the crossword puzzle circuits.

A: What got you into doing all of this?

EK: We’d been watching “Jeopardy”—my wife and I— since forever. And we saw that they had auditions, and we said, “Sure, we’ll go do this.” And it took several tries before they actually called me back to be on the show. But it’s a lot of fun. And anybody who watches the show, if you keep track of your answers, if you can get three out of four of the answers right, you have the stuff to win on the show. Nobody gets to answer all of the questions. But, of course, now all the auditioning process is online, and it’s not as transparent as it used to be. Because, I know people who have been waiting, and they’ve said, “Oh yeah, they said they’d call me—or not.” I have several friends who have been on the pipeline for years. They audition online, and they pass everything every year. And they’re still waiting to be called.

A: How did the audition process used to work?

EK: Well, Merv Griffin was the producer of the show. And he owned a casino in Atlantic City, N.J. And you had to go to his casino and take one test—a short test—and then, if you passed that, come back for a second test and an audition. And I did that three times. Finally, it all panned out.

A: And what show was that for?

EK: That was for “Jeopardy.” “Millionaire” was take a 50-question written test and, whatever the cut was, if you exceeded that, they would call you afterwards. And I knew the second time around with that one—they said, “Would you like to stay for an on-camera interview?”—that my odds had just gotten remarkably better. And it was true: they called me a few months later.

A: You also published a few short quiz books.

EK: My trivia books. Yeah, that was fun. The publisher was a friend of mine—he has since passed on—but I go back, and sometimes I say, “I don’t remember the answers to some of these questions.” Potentially embarrassing.

A: A lot of these books are on war trivia.

EK: Yeah. World War II and Vietnam. I wouldn’t call myself a draft dodger, but I would say I was a guy that the draft missed. That’s as close as I ever got. But it’s always been an interesting topic.

A: Was that always your strength on the game shows?

EK: History. That’s what I do at Wesleyan, too. So that makes sense.

A: You also did some things with [Alpha Delta Phi].

EK: I’m in Alpha Delt. I’ve been a member for a couple of decades. I’m one of the alumni board members and, until recently, I was kind of the liaison with ResLife. I’ve handed that over to someone else, because you have to be an employee to do that. Retirees don’t count. I was able to work with ResLife. And Alpha Delt just gave me the opportunity to see students in a different life. Much more personal and much closer. I mean, before, I knew students who worked in Olin or who had been on the wilderness orientation. But Alpha Delt, it’s like being in an extended family.

A: What year did you get involved with Alpha Delt?

EK: It’s been 20-plus years. I was more or less asked to join by a library worker who was a member. I’m still in touch with her, too.

A: So you only got involved after you were here?

EK: Yeah, after I was here. I was never an undergraduate member. There’s the opportunity to become a graduate member, which is someone, typically on the faculty or staff of Wesleyan [who becomes] a member. And it’s been very enriching. People say you get out of something what you put into it. That definitely is true.

EK: Yeah. There are small tournaments in Connecticut that I participate in. And then there’s the big one—the American Crossword Puzzle Tournament—run by Will Shortz of New York Times fame. When you look at The New York Times, he’s the puzzle editor. I’ve done okay in that one, too. But it used to be in Brooklyn for a couple of years. Now it’s moved back to its original home in Stamford, Connecticut. And it’s funny, because I’ve seen several other Wes alums who also compete in the tournament. Some do better than I do, some don’t do as well as I do. But we all get to see each other.

A: What got you involved in that?

EK: Well, we always do the crossword puzzle. The New York Times is the gold standard, although we do several others, too. And what you do is, you can time yourself. Because the crossword puzzle tournaments are graded by accuracy and speed. So if you finish before the deadline, you get points. But if you don’t complete the puzzle, they take points away. So there’s that crucial moment where you’re saying, “This better all be right” when you hand it in. Because if it’s not all right, you lose more points than if you’d spent a few more minutes going over your answers. Then, there’s all the other people who already finished, and you’re thinking, “This is not going to be in the top rank this time around.”

A: How long does it normally take?

A: And how long does each puzzle take?

EK: There are puzzles with different times. Some of the puzzles have a fifteen-minute time—the shorter ones. Some have up to forty-five minute. And those puzzles tend to be larger and more complex. And sometimes a little tricky. There’s a Wes alum who created a computer program that does the [New York Times] crossword puzzle. And, when it’s a straightforward puzzle, he does really well. When the puzzles have tricky answers with puns or clues that are not words or have a funny structure, the program doesn’t do quite as well. That’s Matt Ginsberg [’76].

A: So do you have a sort of network of Wes alums doing this type of thing?

EK: Yeah, there’s at least half a dozen. When we went to tournaments, we always chat with each other. Compare notes. Half of the thing about going to these puzzles—to these tournaments—is not to win, but it’s just that you’re surrounded with other people who you know are also puzzle fans, and there’s kind of a social angle to it.

A: For a while, you were also a faculty advisor for at least a few students.

EK: Yeah, I did that a couple of times when the demand of students exceeded the supply [of advisors]. So, for a couple of years, several of us librarians were also advisors to students. That was also a very different relationship with the student, trying to give them different advice about the classes and making sure all of their paperwork was in order with academic folks at Wesleyan…. I’m [also] a church minister and I’ve done some weddings for Wes alums, some at the chapel, and some at other states, and that’s lots of fun.