Men’s Hockey picks up a non-conference win against UMass Dartmouth to stop a four-game skid. 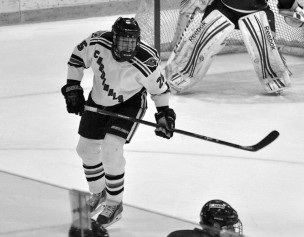 After fighting through a rough patch in the schedule and a four-game losing streak, the men’s hockey squad will look to use a recent victory over the University of Massachusetts Dartmouth to propel it into winning form heading into four more non-conference matchups which precede NESCAC play.

“I think we have been okay,” said goalie Dawson Sprigings ’17. “I don’t think our team has yet to play a complete game from start to finish, which we will definitely be looking to improve upon. There is still room for us to grow as a group and steps to take moving forward in order to reach our goals.”

The Cardinals (2-4, 1-3 NESCAC) lost two conference games at home to Hamilton and Amherst by a total of 9-0.

Wes got down early against the Continentals, which has been a theme in its losses this season. Within the first nine minutes of the game, Hamilton was up 2-0. The first came off of a pass from the left circle by Brandon Willett, that Truman Landowski redirected over goalie Sprigings’ shoulder for the score. Hamilton doubled its lead following Neil Conway’s pass from behind the net, which led to a one-timer from the slot off the stick of T.J. Daigler.

Hamilton took a three-score lead just 37 seconds into the second period when the Continentals redirected another pass, this time through the pads of the Wesleyan netminder. The Continentals final score of the evening came on an empty-net chance from Landowski.

Hamilton goalie Evan Buitenhuis posted a shutout in his first collegiate start. He stopped all 31 shots that he faced. Sprigings made 26 saves on 29 shots for a save percentage of .897.

Against Amherst, Nolan Daley ’16 got the start between the pipes, but it was more of the same disappointment for the Red and Black. At the end of the first period, the Cardinals found themselves down two goals. The scores came off of penalties from Robby Harbison ’17 for hooking and James Kline ’17 for slashing.

The Lord Jeffs added a third at the end of the second period off the stick of Topher Flanagan, assisted by David White and Mike Rowbotham. Two more came for Amherst in the final period, including a third goal via the power play. Amherst was 3-6 on the extra-man advantage while Wes was 0-5. The Cardinals outshot Amherst 37-33 including 29-16 throughout the first two periods, but still could not manage a goal.

Wesleyan started to increase its level of play in a matchup against the 10th-ranked team in the nation, the University of Massachusetts Boston. The Cards showed a lot of positive signs despite falling 6-2, and are now 6-11 all-time versus the Beacons with Wesleyan’s last triumph coming during the 2009-10 season, 4-1.

The Cards played sloppily in the opening period, allowing goals just 1:43 and 6:06 into the game. The Beacons took the loose puck off a Wesleyan turnover in the Birds defensive zone and fired a pass towards the net where Colin Larkin redirected the shot past Sprigings for the one-goal advantage. The second came after Josh Haverstrom drove to the net and Sprigings stopped his shot, but he could not corral the puck, and Kit Sitterley knocked in the rebound off of a backhand.

Midway through the first period, Cole Morrissette ’17 tried to stop a transition opportunity and ended up being sent to the penalty box for interference. The Beacons capitalized on the extra-man advantage when they caught the Wesleyan goaltender out of position on a cross-ice pass from Dan Cornell, which was sent into the back of the net by Michael Kuhn.

Wes got on the board when Assistant Captain Eric Casey ’16 received the puck off of a Kline shot and sent a low slap shot inside the right post to light the lamp. The Beacons responded with a fourth goal just four minutes after with Frankie DeAugustine beating the Cardinal netminder.

After holding the Beacons scoreless through 17 minutes in the second period, UMass Boston got the puck past Sprigings twice before the second horn sounded, which increased the lead to four. Both goals came off rebounds, which the Cardinals had trouble with all game. Kline brought Wes within four after he took a pass from Casey; shortly after skating past the blue line, the sophomore ripped a slapshot top cheddar past the opposing goaltender.

“I would say the responsibility falls on both the goaltender and the defense,” Sprigings said when talking about goals off of rebounds. “You want to prevent as many costly rebounds as possible but no one is perfect and there will always be instances when you need to rely on your defense to help clear the puck out or pick up guys in front.”

Although they experienced a loss in the standings, the Cardinals skated well and managed to hold their own against a top-ranked team. This play gave them confidence going into their matchup with the University of Massachusetts Dartmouth.

Wesleyan came out flying, scoring the first six goals of the contest in a 6-1 rout which included a total of 58 shots taken to only 30 from the Corsairs.

Harbison gave the Birds a 1-0 lead when he scored from a distance off passes from Terence Durkin ’16 and Alex Carlacci ’16. Following a good forecheck from the same line, Durkin took control of the puck, got it to a driving Carlacci and, once reaching the net, he fed a perfect pass in front of the crease to Assistant Captain Jay Matthews ’16 for the score.

Matthews struck again, this time off a solid pass from Kline, and the sophomore had a power-play score of his own off an assist from Morrissette to give Wesleyan a 4-0 edge.

Elliott Vorel ’17 gave the Cardinals another tally off a wrist shot in front of the goalie from a cross-ice feed from Kline, with Captain Jim Albrecht ’15 also assisting. Kline’s second goal was the Cardinals’ final of the afternoon after he decked the goalie, forced him to fall, and then sent a shot past the netminder off assists from Carlacci and Albrecht. The Corsairs beat Spriginings once to reach a final score of 6-1.

“I think being aggressive definitely helps my play, so being able to maintain that aggressiveness throughout an entire game is an important skill I have been working on,” Sprigings said about only allowing one goal in the contest.

The Cardinals will have two more non-conference matchups to close out the fall semester starting with Hobart College on Friday, Dec. 5 and Elmira College on Saturday, Dec. 6. Over the winter break, Wesleyan will face Wentworth Institute of Technology and an unnamed opponent at the Salem State Tournament, as well as conference clashes at home versus Williams and Middlebury, and road tests against Colby and Bowdoin.

“[We need to] just keep working and getting better,” Sprigings said. “We have some tough out of conference games coming up in our schedule and hopefully we can use those to fix up some of the holes in our game before we jump back into league play.”