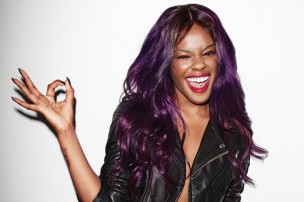 For about two years, it seemed as though Azealia Banks was dedicated to punishing anyone who ever took her seriously. After the release of her incredible venom-laced single, “212,” nearly three years ago, Banks all but stopped making music, diverting her attention to a series of furious and increasingly baroque Twitter feuds. To a certain degree, this was not entirely Banks’ fault. She spoke often about her ongoing battle with Interscope Records, her record label at the time, and the limits it placed on her ability to make her music the way she wanted to. Still, watching her toss increasingly derogatory insults at other artists was disheartening. Worst of all, it constantly threatened to swallow up the incredible tracks Banks had already released and ensure that any others would simply be sucked back into the increasingly hectic social media tempest that now defined the artist. Though Banks had spoken excitedly about an upcoming LP called Broke With Expensive Taste since 2012, it seemed doubtful that the record would ever see the light of day.

Then things started looking up. In mid-July, Banks announced that she and Interscope had parted ways. Two weeks later, she released “Heavy Metal and Reflective,” which she claimed would be the album’s second single. In September, she released a third single, “Chasing Time.” Then, out of nowhere, two weeks ago, she released her whole album. Broke with Expensive Taste (BWET) was a reality. It was alive. It was well. It was goddamn spectacular.

In many ways, it’s difficult to see Broke with Expensive Taste as a single product, since it’s made up of a diverse set of tracks that were produced and released over an almost three-year span. To its credit, BWET doesn’t waste time trying to re-contextualize any of these long-available songs. Rather, Banks’ record dedicates itself to a sort of attitudinal and electric overload that uses new songs to unabashedly ramp the intensity up around the old ones. When “212” plays on this record, it feels like the same song, yet it’s somehow larger. That one song is charged with every bit of the album’s energy: a playful, merciless, cresting wave of confidence and aggression. So when that wave comes crashing down, when Banks starts screaming once more, “What you going to do when I appear?/Wh-when I premiere?”, it feels as though every microcosm of sound on the track is coming to life. It’s the first of many battle cries on the record, but it’s the most unequivocal. It’s on: Azealia Banks is back, and she’s out for blood.

From start to finish, BWET is a wall-to-wall display of confidence. Each track ripples with a hard-won, unashamed versatility that allows Banks to leap between styles within the album and within songs themselves. Given the time it took for the album to be released, it’s a virtuoso miracle on Banks’ part that the whole thing feels so alive, even in those moments when it misses its mark. Nothing about BWET is small. As the record careens forward along echoing rhythms, electric undergirding, and intricately crafted lyrics, it refuses to slacken. It’s a record of bravery, bombast, and frank, angry celebration.

Part of what makes BWET work so well is how immediately it reaches this point. From its opening minutes, the album is absolutely certain what it wants to be and what it wants to do. The opener, “Idle Delilah,” eases to life as a scattering of sounds—electronic boops and the stark clacking of wooden percussion—that push forward before swarming like individual cells into one insistent beat. It is only as this bass line solidifies that Banks emerges, playfully, coyly, and teasingly singing out from the thumping hive: “Are you suicidal?/Are you in denial?” It’s something between a schoolyard taunt and a beatitude, and Banks moves seamlessly between effortless, spare poetry and leaping innuendo. She’s the only artist who can steer the track so confidently into its second verse, chanting, “He took you to cruise ships, put a yacht on me/He said, ‘The puss deeper than the deep blue sea’/Indeed the puss deeper than the three Fugees.” It’s incisive, hilarious, and mesmerizing.

From there, the record only builds. With “Heavy Metal and Reflective,” Banks creates a swirling, industrial head-banger, stringing short punctuated lyrics together against a single unending beat that vibrates the entire track. Midway through, she is submerged within the production, only for her voice to emerge once more, echoing and haunted, as she quotes from William Blake’s “America, A Prophecy.” It’s an immensely strange and gripping track that defies everything else on the album and stands in unflinching opposition to Banks’ work on cuts like “Chasing Time,” a bubbly, sultry pop hook wrapped around the artist’s straightforward lyrical mastery, or “Nude Beach a Go-Go,” a surf-rock song subverted and transformed by Banks.

If BWET has a weakness, it’s that the sheer mass and diversity of material prevents the record from ever fully cohering. The overwhelming strength and confidence of the majority of the album make the weaker songs, like the closer, “Miss Camaraderie,” stick out, and even some of the most impressive tracks have trouble fitting into BWET’s big picture. At times, the record feels disappointingly piecemeal, as if it were a hasty combination of multiple perfect EPs. In a way, this is perfectly understandable. Banks has been working on her LP for multiple years, and it would be nearly impossible for her not to at least briefly lose sight of the larger theme. That being said, it can be disappointing to imagine what the album could have been had Banks not been distracted by the meddling of Interscope and her own social media issues.

Luckily, these failings do very little to sabotage the experience of BWET. If nothing else, this is an album that should remind all the people who tuned out on Banks why they were excited to begin with. It’s a record that’s unlike anything else this year and wears its weirdness on its sleeve with glee. Banks is a force to be reckoned with, and BWET provides over an hour of proof. At the very least, there’s something about hearing “212” in its place on the album it was originally made for that made me crack something of a wicked smile. What could have been a half-baked exorcism for Banks—a chance to finally just get it over with—is a full-scale bacchanal of relentless talent. This is the last time we forget what Banks is capable of.