About 700 pounds of turkey and much more goes into the success of the annual Usdan Thanksgiving feast. 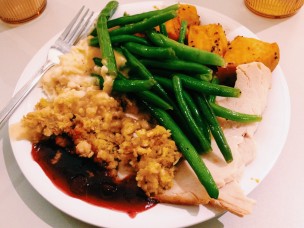 Complete with festive autumn dishes and a prevailing spirit of gratitude, Bon Appétit Management Company served its annual Thanksgiving dinner on Thursday, Nov. 20 in the Marketplace at Usdan, exactly one week before the national holiday. Over the course of the evening, students enjoyed roast turkey with gravy, candied sweet potatoes, cornbread stuffing, and many other Thanksgiving favorites while they celebrated the holiday as a community.

The dinner is one of Wesleyan dining’s most involved events of the year, with all dishes prepared on site and with turkey roasting beginning almost a week in advance. According to Bon Appétit Resident District Manager Michael Strumpf and Executive Chef Brian Dagnall, the kitchen roasts about 700 pounds of turkey, bakes about 200 pies, and cooks about 60 gallons of gravy on this one night alone. The menu stays fairly standard from year to year, but the staff will occasionally change up the dessert options depending on the ingredients available to them.

In keeping with the goals of Bon Appétit’s Farm to Fork program, a company-wide initiative to purchase at least 20 percent of ingredients from family farms within a 150-mile radius of where they will be prepared, Dagnall mentioned that a large majority of the dishes served at the Thanksgiving dinner were made with local ingredients.

“Whatever we can pull local right now, like the squash obviously we’re getting local, the clams… the turkeys are raised without antibiotics, which is kind of a policy we follow. The potatoes we get from Szawlowski Farms in Massachusetts,” Dagnall said. “Probably about 80 percent [of the meal] has a local twist to it.”

Though the food plays an integral role in this holiday’s celebration, Strumpf cited its aspect of togetherness as the most important feature of the annual Thanksgiving feast at Usdan.

“It’s just nice to see the students eating together,” Strumpf said. “And the faculty and staff, they volunteer, they help serve, they help cut the pies and things like that, so it’s really a community day. It’s… a day to celebrate your friends and family. It’s a great American holiday, so that’s what it’s all about.”