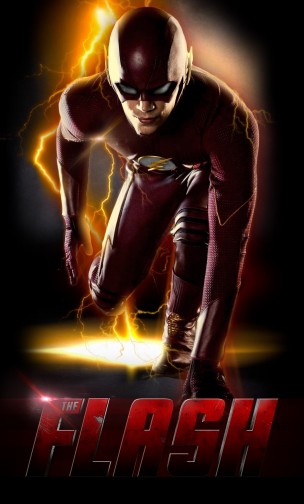 Set as a companion piece to The CW’s hit show “Arrow,” “The Flash” offers the same corny superhero fun, this time with an adorable heart of gold. Refusing to adopt the dark, gritty palate of its fellow DC Comics-television brethren, “The Flash” delights in being what its world always has been: earnest and, sometimes, a little stupid.

Following the adventures of Central City Police’s assistant forensic investigator Barry Allen (played by Grant Gustin), the show is quick to find its feet and set off running. The pilot crams an incredible amount of exposition in through its special effects, using on-screen “Sherlock”-like gimmicks to show Allen’s genius, and revealing in flashbacks how Allen is emotionally scarred from his mother’s murder and his father’s conviction for the crime. Gustin certainly sells the part, finding little moments to display his character’s charm and sweetness with a shy smile or a head tilt. I am certainly smitten.

Of course, all of this is cut with the usual CW fun of unrequited love, in the form of Allen’s best friend from childhood, Iris (played by Candice Patton). Unfortunately, the two actors have little-to-no chemistry between them, and the show flounders in showing why Allen harbors such a huge crush. In turn, Iris is disappointingly annoying as one of the few female characters, having been given the consistent problem of writing her dissertation, later changed (miraculously) to her journalism class project. Added family drama arrives in the form of detective Joe West (played by Jesse L. Martin), who acts as both confidant and surrogate father to Allen in times of trouble.

Everything changes, however, when Allen is struck by freak-storm lightning and—voila—becomes blessed with incredible superhuman speed and equally incredible CW-worthy abs. The show attempts to puff this up with ludicrous science mumbo jumbo, but, honestly, nothing will ever disguise how utterly dumb this superpower is. Even worse, the use of graphics to depict Speed-Vision is absolutely ludicrous, as the show explains that everything conveniently slows down when Allen is running because he’s just that fast. This results in a number of cringe-worthy sequences with people frozen in supposed time and space, adding a red blur to depict some sort of Flash action.

Like Allen, all of the antagonists in the show were struck in the same freak storm, resulting in a number of superhuman—or, as the show calls them, “metahuman”—powers. The particular showdowns with villains become even more problematic, as the show must find a way for Allen to save the day in a seemingly convincing way but also on a budget. From the roster of baddies, the show usually queues up ones with conveniently similar powers (two of the four I’ve seen so far involved some form of wind or gas) and quick resolutions.

The drama surrounding Allen’s powers and exploration of them also falters with a team of quirky scientists who track Allen down to help him adapt to his newfound powers. Similar to Iris, the scientists, Cisco (played by Carlos Valdes) and Dr. Caitlin Snow (played Danielle Panabaker), add little flavor to the show and are, at most, really good at offering paragraphs of exposition. Leading them is wheel chair-bound Dr. Harrison Wells (played by Tom Cavanagh) who, like Cisco and Snow, undergoes little character development, but is tasked by the omnipotent writers to have some sort of dark, hidden agenda concerning Allen’s new talents.

Overall, the show does what it sets out to do: entertain. Over 43 minutes, the episodes move relatively quickly and follow the same three-act structure of setting up, fighting, and defeating a weekly baddie. True, the show has problems in its canonical mythos, but it unabashedly wears its heart on its sleeve. The show never panders to the viewer, winking and nodding that, yes, this is silly. Instead, it strides bravely forth, waving its own flag and blowing its own horn, which is laudable in and of itself.