With a 20-19 win over Trinity, the Cardinals notched their first victory over Route Nine Rivals in 14 years. 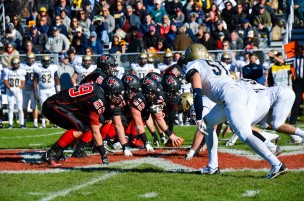 Hoping to avert an unlucky thirteenth straight loss to Trinity, the football team made sure to capitalize on its opportunities this past weekend at Corwin Stadium. The Cardinals (7-1) overcame a stingy Bantams defense and a fourth quarter comeback by Trinity (5-3) to take a 20-19 win. The upperclassmen have tallied up two consecutive seasons with a 7-1 record, an achievement that was last completed in 1947-48.

The Cardinals started off slow with two of their first three possessions beginning at their own one-yard line. Conversely, the Bantams were getting the ball near midfield to begin drives. The Wes defense maintained its prestige, however, keeping the game scoreless through the first quarter.

“Once they started the freshman quarterback, we knew they weren’t going to be throwing a lot, and would be running the Wildcat formation a lot,” said Head Coach Mike Whalen. “We needed to be sound on defense and we had people on the field to play the jet sweep and people to play the inside run. I think we did a great job on defense and I think we only held them to 189 yards of offense.”

Trinity started the scoring off early in the second quarter with a one-yard run by its mobile quarterback, Spencer Aukamp. Due to solid field position, the drive only went for 49 yards and lasted 2:34. A botched extra-point attempt left the Cardinals trailing by six with 13:31 left before halftime.

“It was a tough first quarter, because the field position was in Trinity’s favor,” Whalen said. “We had a hard time on our first couple of drives offensively, but our defense kept us in the game. We were really fortunate to be down only 6-0, because we only ran, I think, nine plays in the first quarter. It could have been 14 or 21 to 0 at that point. I was really happy with the way that we competed in all three phases, and we knew that it was going to be a 60-minute game. We got behind early and didn’t panic.”

Following a three-and-out on the next Wesleyan drive, the Cardinals sent out the special teams unit and got their first break of the game. Jake Bussani G’14 seems to always make an impact on the field, and this game was no different. He forced a fumble on the return and recovered the ball to give the Cardinals new life at the Trinity 30-yard line.

The first play of the drive saw quarterback Jesse Warren ’15 rolling to his right and throwing across his body deep down the field to Jordan Fabien ’15. Fabien, who was cutting left, was able to come back to the ball for a 25-yard completion. Unfortunately, the momentum was halted, and after three unsuccessful plays, red-hot kicker Ike Fuchs ’17 came on to nail the 22-yard field goal and cut the deficit to three.

The Wes defense forced another three-and-out and the offense drove down the field, once again finding themselves in the red zone. A two-yard completion to Josh Hurwitz ’15 on a third-and-three left Whalen with a tough decision. He decided to go for it on fourth down with a quarterback sneak, but Warren slipped on the snap and came up inches short of the marker.

“That was one that I wish I had back,” Whalen said. “I had the field goal team ready to go, and then I called a time-out. Talking with our senior offensive linemen, they felt like they could get it with a quarterback sneak, and I elected to see if we could get it, because if we could get a first down and then a touchdown, it would have had a big impact on the game. It was an instance where I probably let my emotions get the best of me and listened to my players too much. Jesse would’ve had it, but his foot slipped, and our line had a good enough push, where I thought if he didn’t slip, we would’ve gotten it. In retrospect, we probably should’ve kicked.”

The defense held once again, and on fourth down, Jordan Stone ’17 blocked the punt, giving the Cardinals a first down at the Trinity 13-yard line. Wes could only amass five yards in three plays, which led Whalen to call on Fuchs. The sophomore kicker was good from 25 yards out to tie up the score with 1:23 left in the first half. The Bantams would run out the clock on their ensuing possession.

The Cardinals found the end zone on their second drive of the third quarter, utilizing the run game to their advantage. In seven plays, the team drove 48 yards, culminating in an eight-yard touchdown rush from Lou Stevens ’17. Stevens ran right, and after bouncing off a blocker, he found an open path to the goal line for the 13-7 advantage.

The Cardinals would add to that lead a couple of drives later through the arm of Warren. The quarterback connected with Hurwitz on a 26-yard pass play, and then found tight end Neil O’Connor ’17 tiptoeing on the sideline for a 12-yard completion. On the following play, Fabien beat his man in single coverage on the outside, where Warren found him for a 53-yard touchdown strike to give the Cardinals a 20-6 lead.

“On offense, we knew their front seven was really talented, and it was going to be hard to run the ball, like we did against Williams, pounding the ball with Lou Stevens,” Whalen said. “The first quarter was really difficult, but once we settled in and got some points on the board, that was a big momentum swing for us. We knew that the seniors were going to have to make plays in the passing game for us to win, and we hoped that that would be an advantage for us. I think that those guys really stepped up for us and played very well.”

The game was far from over: Trinity found a second wind in the fourth quarter. In just one minute, they mounted an efficient, three-play, 42-yard drive to cut the lead to seven. The touchdown came on a 28-yard pass down the middle from Aukamp to Brendan Oliver.

With just over two minutes left in the game, Trinity had the ball at the Wesleyan seven-yard line following a 50-yard punt return. On fourth down, Aukamp scored from two yards to cut the lead to one. Instead of opting for overtime, the Bantams went for two and the win. Justin Sanchez ’17 made the play of the game, tackling the Trinity running back in open space to prevent him from scoring. For his efforts, Sanchez fittingly earned the title of NESCAC Defensive Player of the Week.

“Once we got the lead, they didn’t let up,” Whalen said. “Trinity made some plays, but our kids rose up to the challenge, and when they elected to go for the two-point conversion, it was a big play by Justin Sanchez to shut that down and win the game for us.”

Whalen spoke about the formation in which the defense aligned for the two-point attempt.

“We were in a blitz situation, where we had man-coverage, but our safety, Justin was free,” Whalen said. “As soon as the back motioned out, that was his guy. He set his sights right on him and when they threw it, he was in great position. If you look at the film, if he doesn’t make that open-field tackle, they probably get the two-point conversion. It was a really great individual effort by Justin.”

Another successful season for Wesleyan football is finished, but the Cardinals still have higher goals to reach for next season. The team looks to lean on a greater scope experience and new talent to help cover the loss of senior leadership.

“When I think of this season, it would be impossible for me to think of it without our 26 seniors,” Whalen said. “What they have accomplished over the past four years has been amazing. They came here hoping to change the culture of Wes football, and if you just look at what they’ve accomplished, it’s been amazing. The first Little Three title in 43 years, the first NESCAC title since 1997, the first win at Amherst in 30 years, and breaking the 12-game losing streak against Trinity. Finally, the first back-to-back seven-win seasons since 1947-48. They’ve cemented themselves as one of the top classes to ever come to Wesleyan.”