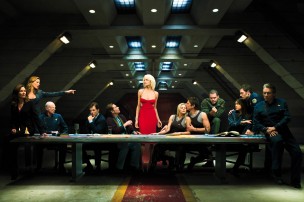 It is the far distant future. In its folly, humanity has created a race of robots, the Cylons, that have turned against us. Eighty years later, they have returned to wipe humans out entirely. As a fleet of the last few thousand survivors escape into deep space, humans come to discover that the Cylons no longer look like robots; now, they are able to look like us. Cylons can be anyone in the fleet, and they might not even know it until they’re sent orders.

They could even be you.

Of course, some things stayed the same. Characters continue to shout “frak” to get around swearing on television. The original show’s characters survived, but with some updates. Some controversy arose when Lieutenant Starbuck (Katee Sackhoff) was reimagined as a woman, a complaint soon laughed out of existence as Sackhoff quickly became the most beloved cast member.

Many other cast members deserve praise, such as Edward James Olmos, who gives his all as Commander William Adama, no matter how ridiculous his dialogue becomes. Mary McDonnell (the new president of the fleet) plays off him quite well and is my personal favorite as she struggles to make the best of the impossible decisions she faces.

On the villainous side, Tricia Helfer is immensely entertaining as the first—and most looming presence—of many Cylons, Number Six. She takes a character who ran the risk of being mere ham and sex appeal and brings real life to the robot, and as we see more and more iterations of Number Six, she reveals her true and exciting range.

“Battlestar Galactica” is one of the better examples of feminist science-fiction out there. Not only does it have an arsenal of well-written female characters, but the society those characters inhabit is seemingly more progressive than our own. The use of pronouns and co-ed showers imply an environment where gender is not a large factor.

The series is lauded as one of the best science-fiction shows to date, and it’s made a lasting impression on other artists of the genre. Joss Whedon has borrowed several of its participants (from both cast and crew) in his later shows, and many cast members have gone on to do voice work in popular video game series such as “Mass Effect.”

The praise may be warranted, but “Battlestar Galactica” is not perfect. The mythology gets stranger and stranger as the show progresses, and this does not play to its strengths. The show works best when it acts as a futuristic political thriller, asking its audience tough questions about humanity and the role of the military when our survival is thrown into question. Strange reveals about mysticism and humanity’s ancient past are exciting but seem less relevant to the show’s central focus.

The show also gets bogged down in filler episodes that don’t really advance much of anything, and when the show tries to care about characters whom it doesn’t bother to make interesting, the audience is alienated. The inconsistent Lee Adama is most prone.

But the show is certainly a technical achievement. Its special effects deliver shockingly wondrous space battles for television of the time, and the music is just as beautiful. Bear McCreary picks up where composer Richard Gibbs left the miniseries and delivers a vibrant and diverse score. He’s able to mix Southeast Asian sounds with more western melodies (to name just two influences) to create a musical canvas befitting the future of humanity. Any time the Cylons are involved, he adds a lively percussion with just a slightest hint of ominousness.

The Cylons, ironically, are the heart

and soul of the show. What does it mean to be human? Both the Cylons and the humans are working to figure that out, and the lines between the factions become increasingly blurred as the series continues. While some Cylons consistently act as antagonists for the entire series, others frequently question their allegiances. The Cylons themselves aren’t inherently evil as a group either; they’re just struggling to understand their place in the world.

Series creator Ronald Moore explores these issues from several angles. For one thing, it’s the Cylons who are devoutly monotheistic, while humans, for strange reasons, worship updated versions of Greek gods. The question of humanity is even more interesting when characters begin to ask if they themselves can be trusted. The show works best when the entire cast has a pervading sense of paranoia—both externally and internally—which leads to some great character development. The show doesn’t always know how to handle plot pacing (it often goes either too slow or too fast), but at times it can effectively traumatize its audience with twists and turns. In fact, the show offers some of the best plot twists this side of “Lost.”

What makes “Battlestar Galactica” so remarkable is that it realizes a fully-fleshed out science-fiction world. It makes more sense of how its starfighters can fly and maneuver than those of “Star Wars” or “Star Trek,” for instance. But more importantly, the show makes characters within that world even more realistic. The show tries to accomplish a lot, and it succeeds more than it fails—just like humanity, perhaps. It’s an intensely human show that just happens to have killer robots. But really, what more could you ask for?