Book Review: “Not That Kind of Girl”

“Not that Kind of Girl” by Lena Dunham offers a touching, humorous, and occasionally chaotic portrait of life as a young woman in today’s world. 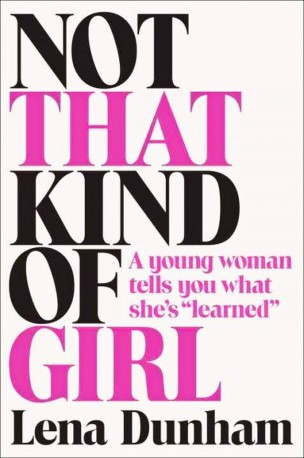 The inside cover of “Not That Kind of Girl,” the new collection of essays by Lena Dunham, the creator and star of HBO’s “Girls,” is filled with Rorschach inkblots, each composed of a number of brightly colored totems: martini glasses, ukuleles, banana splits, and polka-dotted Band-aids. The clusters of shapes bloom outward toward one another, never quite touching, but always suggesting that they might. As a symbol of the book they enclose, these shifting arrangements of everyday comforts are both shamelessly on the nose and playfully evasive. Certainly, they promise the expected mash-up of the serious, the mundane, and the twee.

At the same time, the level of mystery that these symbols gesture toward is something that Dunham’s book never quite achieves and perhaps isn’t interested in achieving. The collection’s subtitle is, after all, “A young woman tells you what she’s ‘learned.’” That said, Dunham never seems quite sure of what those quotation marks actually stand for. Is “Not That Kind of Girl” interested in the failings of the memoir as an educational tool, or are the quotes simply a cheeky stylistic flourish meant to undercut the self-seriousness of the autobiography?

This question ends up being one of the central tensions of Dunham’s collection, if it isn’t already the central tension of her work overall. “Girls,” which over its past three seasons has proven to be both mercilessly funny and breathtakingly cogent, often finds itself settling into a purposely uneasy middle ground on the topic, positing lessons learned through failure by everyone but those who actually need them. Similarly, there seems to be a decent amount of internal confusion within this new book about how its subjects are supposed to interact, and whether there actually should be any internal logic between the stories that the author wants to tell. In a lesser collection, this might prove to be a fatal flaw. Dunham, however, seems to have become rather adept at navigating this sort of thematic conflict. The result may not always be perfect, but for the most part, “Not That Kind of Girl” comfortably and fluidly divines meaning from its wealth of narrative.

“Not That Kind of Girl” is divided into five sections of essays: Love & Sex, Body, Friendship, Work, and The Big Picture. Though the book does not demand to be read all the way through, there’s a distinct tonal uniformity to the writing that seems to suggest a united whole. It’s also a tendency that can become frustrating over long stretches, as conflicts of various severities unavoidably read similarly. While certain moments do stand out because of Dunham’s fearless honesty, others seem to get lost in the myriad frustrations that she’s intent on discussing. No topic ever seems superfluous, but some do not quite seem to fit into the book.

That being said, no one section ever seems wholly underdeveloped, each speckled with bits of insight and humor. In “Take My Virginity (No, Really, Take It),” Dunham explores her early views of her own sexuality, and the use of virginity as a checkpoint for maturity. “Platonic Bed Sharing: A Great Idea (for People Who Hate Themselves)” identifies Dunham’s early need for nonsexual attention as a destructive mechanism of self-loathing. “Sex Scenes, Nude Scenes, and Publicly Sharing Your Body” gives Dunham a chance to enter the conversation about “Girls” that still seems to galvanize people who refuse to watch more than fifteen minutes of the show. “Who Moved My Uterus?” is an exceptionally funny and surprisingly tender meditation by Dunham on her reproductive system and the alternating frustration and comfort it has brought her (complete with a giggle-inducing diagram that labels the fallopian tubes as “Leave Me Alone” Mountain and “Actually, Pay Attention To Me” Hilltop).

These longer essays are broken up by shorter comedic lists that help Dunham flex her neurotic humor muscles. These include an exhaustive bag-content inventory and a wonderfully footnoted email sent to a Philip Roth/Charles Bukowski wannabe who demanded that Dunham read his misogynistic short story about a hookup with a J.Crew saleswoman while still refusing to acknowledge her existence for an extended period of time. Other highlights include Dunham’s pieces “Emails I Would Send If I Were One Ounce Crazier/Angrier/Braver” and “I Didn’t Fuck Them, but They Yelled at Me,” which together form a spectacular one-two punch at sexist dynamics in the workplace.

Of all the collection’s essays, though, “Barry” may be the collection’s strongest. Through a series of meditations on Dunham’s history with the idea of sexual assault, the piece discusses her rape at the hands of an Oberlin super-senior, who took advantage of her one night after a party. It’s a tour de force in emotional and situational detail, and it paints a searing picture of recovery from sexual violence. It’s also a masterful meta-textual evaluation of how writers and memoirists discuss sex in their work, and how individuals write and rewrite their own stories in order to accommodate their personal ideas of what their lives and relationships should look like. “I’m an unreliable narrator,” Dunham begins, before telling her story. It’s a sharp and poignant opening that creates conversation between modes of memory.

“Not That Kind of Girl” is not without fault, however. At times its humor feels too conversational to really enliven some of the prose, which can be unremarkable and plain, albeit readable. There are moments in which Dunham seems to lose the self-awareness that saves some of the wilder essays (at one point she refers to a short story she wrote when she was twelve as Carver-esque, but details its plot with a little too much specificity and admiration for the plaudit to seem ironic). Her references to “Girls” often fall flat, and the more recent the anecdote, the less interest Dunham displays in really digging through it. Her references to her current relationship with Jack Antonoff (of Bleachers and fun. fame) also fall flat, due to a strange over-romanticization of it. Even stranger is Dunham’s refusal to call him by his name (which becomes more frustrating when a mention of “him” is accompanied by a doodle of a key ring labeled “Jack”).

Furthermore, at times, despite her titular promise, Dunham stretches too hard to end the essays with a distinct lesson. While many of the themes work extremely well, there are moments when Dunham’s summary of them comes across as didactic, tactless, and preachy, despite her attempts to preface these paragraphs with some sort of self-aware teasing. Essays such as “Falling in Love,” in which Dunham recounts her relationships with each of the men to whom she’s said “I love you” before hastily pulling a quick lesson from the memory of each encounter, are especially guilty of this. It’s at these points that the prose seems laziest and the humor the least enticing. In fact, at these points the book seems all but certain to lose Lena Dunham’s unique voice and texture before luckily pulling itself out of the muck with a punchier follow-up.

Dunham is a captivating and fearless writer, even in the few moments when she seems to be a disorganized or unpolished one. In “Not That Kind of Girl,” she paints a picture of the multitude of swarming selves responsible for growth and maturity, balancing the anxiety, trauma, and humor of failure and success gracefully with one another. By the end of the book, Dunham succeeds at imparting a sort of comfort and awareness to her readers, even if the materials of these feelings seem hard to locate. Perhaps it’s the book’s shameless tendency to hold the uncomfortable under bright lights. Perhaps it’s the author’s unwillingness to settle for simple answers, even when she seems tempted to dig for them. Or perhaps it’s that, despite any plan or promise to the contrary, Dunham has, like it or not, learned something worth sharing.