T-Swizzle bursts out of the woods, shakes off country sound on new album. 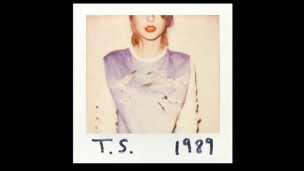 In preparation for the release of 1989, the fifth album from Taylor Swift, I did what I assumed any sane person would do and listened to her preceding four albums back to back. Swift, more so than any pop songwriter in recent memory, has grown immensely from record to record, beginning with the country trappings of her self-titled debut and stretching through the gradual pop experimentation and the complete abandonment of the country style that defined her first album and, to a lesser degree, Fearless. 1989 is unabashedly a major moment in this trajectory and has been billed, both by Swift and by those fans and critics who have paid attention to her releases of singles and samples, as the final step in her transformation from pop-country star to a songwriter firmly ensconced in pop music.

It’s not an inappropriate billing, either. It’s nearly impossible to listen to any of the music on 1989 and find even the slightest connection to her debut or its opener, “Tim McGraw.” Even the poppier cuts from that record—“Picture to Burn,” “Our Song,” “Teardrops on My Guitar”—share absolutely no DNA with this newest effort from Swift and her team. Whether or not that’s disappointing news to longtime listeners will ultimately be a matter of taste, though I would be surprised if fans who liked Swift only for her country music have followed her this far. Regardless, 1989 is, without a doubt, her best work: charged with a tenderness, humor, energy, and sheer accessibility that defies even the high bar that Swift set for herself with Red.

Furthermore, 1989 is poised to be one of the best pop albums of the last five years. Over the course of its 13 tracks (ignoring the three bonus tracks that will be included on the deluxe edition), 1989 remakes Taylor Swift not only as a brand but as a songwriter. It draws on the best of her previous work and enhances it. It charges forward, graceful, raucous, self-assured, and gleeful in the ways that the best pop music has always been.

Perhaps most incredible, though, is that while the record consistently demonstrates a keen appreciation for the mechanisms of pop songwriting, it sounds like nothing else on the radio today. Even the tracks that seem superficial upon first listen reveal themselves beautifully, sounds unfolding and blooming along confident percussive currents. The album certainly adopts traits of artists such as Lorde, Lana Del Rey, HAIM, and ’80s stalwarts such as Phil Collins, The Pretenders, Blondie, and Cyndi Lauper. But each of those influences is integrated so deftly into the fabric of both the individual tracks and the album as a whole that no voice or style dominates the finished product more than that of Swift herself: playful, electric, and unquestionably in control.

In many ways, this is due more to the attitudinal shift in Swift’s music than to any shift in genre or production. Over the course of her discography, Swift has worked to shed the parts of her music that fail to work or ultimately undermine her tone. In 2006, when she first released “Picture to Burn” and came under fire for a lyric rightfully deemed homophobic, she pulled and recut the single with a new line. On Speak Now and Red, she abandoned the problematic virgin/whore dichotomy that tainted songs like “You Belong With Me” on Fearless. In recent months, she’s become more outspoken about her attempts to integrate a new, consciously feminist ideology into her music and life, crediting new friend Lena Dunham (whose partner, Jack Antonoff of Bleachers and fun., worked with Swift on a number of 1989’s tracks, including “Out of the Woods”) with helping her understand and discard harmful attitudes that had made it hard for some to enjoy her work.

All of this, in addition to Swift’s choice to increasingly focus on her friendships, make 1989 a much smoother listen. Without a doubt, the Taylor Swift of the past had been able to mine her heartbreak for some incredible powerful tracks (“All Too Well” remains my favorite of her songs), but with the release of 1989, she seems to understand that her work in that vista was threatening to yield fewer and fewer truly moving returns. The few songs that do deal with Swift’s romantic life feel fuller and more mature, gesturing towards closure rather than rage. They remain emotionally resonant without relying on the emotions of the listener to achieve their power.

Track by track, 1989 sustains a momentum rivaled only by Swift’s work on Red. 1989 pushes forward, unflinching and ecstatic, even in the moments when it slows. Furthermore, the record organized in such a way that even its weaker cuts are emboldened and fortified by their neighbors. The opening track, “Welcome to New York,” is easily Swift’s weakest opener since “Tim McGraw,” but as a lead-in to the sultry groove of “Blank Slate,” it works perfectly. It helps that “Blank Slate” is the ultimate proof of Swift’s self-awareness, taking the opportunity to strike down the retch-inducing politics of “You Belong With Me” with teasing and self-deprecating lyrics such as, “I’m a nightmare dressed like a daydream.” It also doesn’t hurt that ”Welcome to New York” boasts a wonderful opening build.

Furthermore, as the album continues, it becomes clear that that opener had very little do with New York anyway. Much like the rest of 1989, it’s a meta-textual bait and switch, as much about Nashville as any down-home country song is. It’s a promise from Swift to her listeners that she’s traded in her old symbols for something new. The landscape she’s crafting is not a representation of any one city or state of mind but rather a generic stomping ground in which she can toy with those tropes of the music that she’s been inspired by.

With “Style,” the record’s third track, Swift continues to up the ante, her voice sashaying across synths to reach the thrumming refrain. As an example of her songwriting ability, “Style” is magnificent, juxtaposing the idea of timeless fashion with the far less appealing idea of a relationship that ultimately degrades into a series of patterns that no one questions. As the song reaches its climax, Swift’s chanting “Just take me home!” feels both celebratory and deflated. It’s a wonderful trick that continues to suggest Swift’s keen understanding of pop songwriting.

“Out of the Woods” is a deceptively complex track, masking a well of conflicting emotion with its insistent and unwavering engine of a chorus. As a break-up song, it’s like nothing Swift has written before. The tender lyrics, laid carefully over almost militant percussion, build perfectly, before eliding into the dreamy “All You Had To Do Was Stay,” which works wonderfully in conversation with the two preceding songs. It’s a rejection of the hurt that is laid out on “Style” and then abandoned on “Out of the Woods.” As such, it completes a seamless musical triplet that accomplishes more emotional growth than it seemed like Swift’s early work achieved over its entire span.

“Shake it Off,” which follows, is placed perfectly. The earworm provides a nice break after the intimacy of the previous three tracks while still maintaining the record’s overall momentum. Additionally, its cheeky and ultimately good-natured tone seems to invoke a sense of peace and fun in the wake of pain. It’s a great logistical choice, and it pays off in spades, especially as the album moves onto “I Wish You Would,” which takes the intensifying rhythms of “Shake it Off” and amps them up, invoking a HAIM-like atmosphere with light guitars, rapid-fire lyrics, and a beat that seems to grow and expand along with Swift’s voice. “I Wish You Would” paints its writer as a woman to be reckoned with, placing a pining ex-lover in his car outside her house, the same sort of maudlin stasis that the old Swift had on previous records remanded herself to. It’s one of numerous songs on 1989 that actually shows Swift painting herself as someone to be desired and wanted. Even if she had played with the idea on tracks like “We Are Never Ever Getting Back Together,” she never dared to do it this emphatically. It may not be a monumental tidal shift in music, but it’s a notable one for Swift herself, playing perfectly with the increasingly aggressive production that her new stylistic choices allow her to indulge.

Though 1989 quiets down in its second half, it doesn’t dull or slacken. There’s something playful about “Bad Blood,” even as it moves into a softer, almost mournful bridge—“Band-aids don’t fix bullet holes/You say sorry just for show/You live like that, you live with ghosts”—that somehow manages to earn its pain before the refrain defiantly erupts once more. The opening schoolyard war cry may at first seem flimsy, but Swift knows what she’s doing, building the track into something that acknowledges hurt before finally turning it inwards to deny the source of her frustration any satisfaction.

The last track on the album (featuring Imogen Heap) may be Swift’s best closer so far. It returns once more to the romantic trappings of earlier albums but equips them with an ache that all but eluded Swift in the past. Using language of addiction, codependency, and the singer’s trademark water metaphors, “Clean” deals in so many emotions at once that it’s a miracle the track doesn’t grind to a halt under its prospects. There’s defiance. There’s anger. There’s sorrow. There’s sympathy. There’s liberation. Over what sounds like a xylophone, Swift proclaims her freedom while acknowledging all of the swarming second thoughts that still haunt her.

As an album, 1989 may not cause a large stir. Ultimately, it’s somewhat modest about what it accomplishes, never insisting on its brilliance. 1989 is a transformative record, but it’s never an exercise in transformation. It’s the next stage in what has been a gradual and clear-headed metamorphosis, earning all of its bombast through its carefully creation and curation. 1989 may not be the album that convinces anyone with an aversion for Swift to change hir tune, but it shouldn’t have to be. As a work of and about growth, 1989 understands the limitations of its desire and scope: Cycles must be broken, things must be earned, and gains and losses must be celebrated and mourned. Even though it is tied by title to the year of Taylor Swift’s birth, 1989 is more about everything that’s happened since. It is generous, honest, and bracing. It’s everything it deserves to be.