Jesse Warren '15 connected with Josh Hurwitz '15 on three of his five TD passes in Wesleyan's 35-0 rout of Bowdoin. 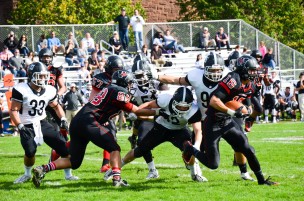 Fantasy football owners who left Jesse Warren ’15 on their bench this past weekend are now disappointed: the senior quarterback threw for five touchdowns in a 35-0 rout of Bowdoin (2-4). The Cardinals (5-1) played their most complete game of the season at Corwin Stadium, getting great efforts from all three of their units.

“I think we played our best overall game so far this season,” said wide receiver Josh Hurwitz ’15. “Our defense completely shut down their offense and our offense was able to execute our game plan well. The special teams unit also stepped up this week, which gave us the advantage in field position the entire game. There are still mistakes being made that need to be fixed. We are still committing too many penalties and there is always room for improvement, but the team is excited to see what we are capable of in the next few weeks.”

The team was able to come out and execute, despite its first loss of the season the previous weekend to Amherst.

“Everyone did a great job preparing this week in practice in order to bounce back from last week’s game,” Hurwitz said. “It was important that we put that game behind us. The captains and the rest of the seniors pushed the team to improve on the intensity in practice to avoid coming out flat to start the game. We knew that we had not played to our potential yet this season so it was definitely nice to see the team click in all phases of the game.”

Wesleyan opened up the scoring on its second drive of the game when Warren connected with Hurwitz on a 15-yard touchdown reception. The possession was aided by a long third-down conversion, where Warren completed a deep pass down the middle to tight end Neil O’Connor ’17 for 33 yards.

“The offensive play calling has been great and we have been able to get a lot of favorable match-ups,” said running back Lou Stevens ’17. “The great play of our passing game has allowed the running game to be more effective recently and we are continuing to get better at both.”

The Birds’ next drive featured more of the same success, this time with Stevens becoming a major contributor.

“We knew we had to commit to running the ball and winning the time of possession,” said Captain Jon Day ’15. “Our big plays in the pass game come as a result of our run game. It’s hard to get anything going on offense if we can’t run the ball.”

Stevens totaled 28 yards on four carries, including a five-yard run that set up Warren’s second touchdown connection of the day with Hurwitz.

“I was able to have some success because of the outstanding effort from my teammates,” Stevens said. “We had a great week of practice and we were able to execute on Saturday with a great team effort.”

Stevens has taken advantage of his increase in playing time this season due to injuries to those who were previously ahead of him on the depth chart.

“I learned a lot from my coaching staff, so I was well able to handle a bigger workload when my opportunity came,” Stevens said. “I also received great support from our captains and senior leaders on the team.”

Wesleyan tacked on another touchdown before the conclusion of the first half, with Warren finding tight end Day for a three-yard score. Freshman running back Jaylen Berry added to the Cardinals’ dominance with a 49-yard scamper on the drive.

“We have to give credit to the coaches here,” Day said. “Offensive Line Coach [Eric] Ludwig had a great game plan and prepared us very well for what we would see from Bowdoin’s defense. But obviously the players play the game and our O-Line led by Pat Dimase [’15] and Shane Scannell [’15] really played a great game. The success we have been having with Jesse Warren passing the ball has been a huge benefit to our run game as well.”

The Cardinals kept on scoring; Bowdoin penalties helped the offense move forward. With 6:25 left in the third quarter, Wesleyan put together a quick and effective drive that lasted just 1:43 and took four plays to reach the end zone. Warren delivered his fourth touchdown toss of the afternoon, this time finding Captain Jordan Fabien ’15 from ten yards out.

Wesleyan’s final touchdown of the afternoon once again came from Warren’s arm, when the gunslinger hit Hurwitz on a seven-yard pass for his third touchdown reception of the game. The drive was long and methodical, wearing down the Polar Bears’ defense. It lasted 16 plays and went for 63 yards, taking 9:43 off the clock. Sophomore kicker Ike Fuchs’s fifth and final extra-point of the afternoon was successful, tacking onto the Cardinals’ 35-0 stomping of Bowdoin.

“Our great week of preparation allowed us to play fast and execute very well on Saturday,” Day said. “We had a great game plan thanks to our coaches and we had guys step up and make big plays when we needed it.”

Stevens led the team in rushing with 121 yards on 22 carries, while Berry added 75 yards on just seven attempts. Hurwitz had a team-high seven receptions and 74 yards to go along with the three touchdown grabs.

Alex Daversa-Russo ’16 had nine tackles to lead the defense, including one sack. Captain Jake Bussani G’14, Anthony Antonellis ’15, and Alex Sakhno ’15 each had an interception during the game.

The team will use this rout of Bowdoin to gain confidence heading into next weekend’s Little Three matchup with Williams.

“I know we will be well-prepared and energized for this one, so I’m just excited to play and I think it will be a successful game for us,” Stevens said.

Last season’s battle in Middletown was a nail-biter. The Cardinals held on in the final minutes to take a 16-14 win and a Little Three Championship.

“At this point, we all know our jobs, and it just comes down to preparing the right way in practice this week, and getting better every day,” Day said. “If we can come out and execute our game plan on offense, defense, and special teams we will be alright.”

If Wesleyan wants to steal a victory on the road, it is going to have to take care of the ball and limit its mistakes, something it has been improving on as the season continues.

“We work hard every day on ball security to prevent fumbles, and Jesse Warren does a great job reading defenses and being smart with the ball,” Day said. “We will have to keep this mentality throughout the season to be successful.”

Hurwitz echoed Day’s sentiments on what the team needs to do in order to improve its record to 6-1.

“Now we just need to learn from the mistakes we did make and have another great week of practice,” he said. “There will be a big, loud, homecoming crowd at Williams.  The key will be to block out those distractions and do our jobs. The coaches have prepared us to have the best chance to win all year and that will be no different this week.  As long as we execute on offense, defense, and special teams, we will be in a great position to win on Saturday.”