Christopher Owens Tries Half-Heartedly for Redemption on A New Testament 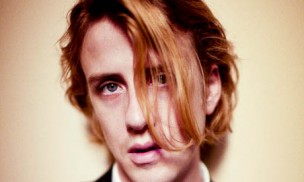 There’s something undeniably ballsy about naming your record A New Testament. It almost reads like a challenge. But if there is any currently working musician who can put a new spin on rock’s invocation of religion, it’s Christopher Owens of Girls. Perhaps this stems from Owens’ extreme candor and incredible reflectiveness in discussing his time with the Children of God religious movement, or maybe it’s simply because of the gospel tones of Girls’ final record (appropriately titled Father, Son, Holy Ghost).

Whatever the reason, the possibility of a Christopher Owens record directly engaging with religion seemed to move in a cloud around A New Testament for a while, and the excitement that combination instilled made the record that Owens ultimately produced more than a little disappointing.

It’s important to say from the outset that A New Testament is by no means a bad record. It contains stretches of remarkable instrumentation, luscious orchestration, and a spare, attuned beauty that few musicians besides Owens can conjure. In fact, at times, this seems to be the album’s issue. At certain points, it’s almost too beautiful.

When Lysandre, Owens’ first solo album, was released in 2013, it was only a moderate success, surprising many who had become enamored with the music Owens had been making with Girls since 2007. Many considered Lysandre bland, and, even as a fan of the record, I find it hard to disagree. Part of the magic of Girls was its ability to infuse the music with both beauty and unease. Listening to songs like “Vomit” or “My Ma” or “Die” off of Father, one is struck by their intricacy and elegance, but also by their weirdness. There seemed to be something lurking behind all of Girls’ work, and that charged the music with an unnameable power.

In the case of Lysandre and now A New Testament, it’s hard to find anything like that. Certainly, both have moments of gravity and energy, but neither seems to be able to seize on the graceful, haunted queasiness that Owens was able to create when working with Girls. On a track-by-track basis, A New Testament has a lot to offer. Most fall under the three minute mark, and, taken on their own, each is engaging and impressive.

On the other hand, when laid end to end, the parts of A New Testament never quite create an engrossing whole. It’s nearly impossible to listen to it without feeling a lack within the spaces between songs. By the midpoint of the record, the music seems to have settled into a comfortable, aesthetically pleasing monotony, adeptly integrating tropes of gospel and folk and rock without ever truly investigating or earning them. Possibly the best example of this is the record’s opener, “My Troubled Heart,” which seems to strive for an affecting examination of religious and romantic doubt, but ends up sounding like an outtake from Billy Joel’s “River of Dreams,” Valleys of Doubt and all.

All of this is especially frustrating given Owens’ well-earned reputation as a songwriter. His best work manages to create an almost uncomfortable intimacy with the listener. On A New Testament, there’s barely anything like that. At times, it seems as though the record isn’t at all interested in what it’s supposed to be talking about, and at others, it isn’t even clear that Owens is sure what he wants to say. Songs like “Stephen” come blessedly close to letting us into Owens’ headspace, but quickly smother themselves under a marinade of choral refrains. On albums like Father, Owens demonstrated an ability to resurrect and reinvent what might otherwise be considered trite or lazy, adding something elusive to images such as a heartbroken man wandering the streets to make the idea seem new once more. Here, though, every cliché seems to slouch into the picture, deployed almost carelessly.

At its best, A New Testament and Lysandre serve as an interesting set of appendices to Owens’ work with Girls. Both albums orbit many of the same topics that were covered on Father and Album (the band’s debut record), even if they never quite understand what allowed Girls to give those ideas and subjects life and intimacy. As a record in conversation with Owens’ earlier work, the album has the potential to grow. While it would be too easy and dismissive to call A New Testament lazy, it would be apt to say that it’s the sort of record that seems to carelessly and consistently court that charge.