Vassar College broke a 1-1 tie late in the game to snag a victory, as the women's soccer team remains winless. 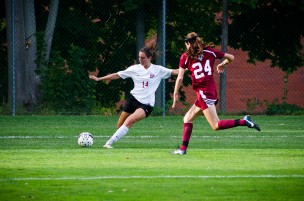 Facing another non-conference foe in Vassar College, the women’s soccer team hoped to post its first victory of the 2014 season in front of its home crowd. The Cardinals fell behind early and could not match the offensive firepower of their opponents, losing by a score of 2-1. The team has fallen to 0-3 overall and is 0-1 in conference play.

“I thought we played well, but were too inconsistent,” said Katie O’Brien ’15, who scored an assist on the Redbirds’ only netter. “We would play well for ten minutes, but then not well for the next five minutes. That is what led to us being scored on twice.”

The Brewers put a tally on the scoreboard early; in just the fourth minute of play, they finished a header into the back of the net from the far post off of a corner kick. Wes was able to even up the score in the 32nd minute when O’Brien sent a pass from the left wing to the center of the pitch, where the ball found Madeline Keane ’16. The junior then fired a 30-yard laser into the inside of the right post.

“I was looking to see who was open, and I knew that she had a really good shot, so I was happy to find her,” O’Brien said.

The first half ended in a deadlock with goalie Jess Tollman ’15 making two saves while allowing one goal in her time on the field. At the beginning of the second half, Tollman was subbed off for Rachel Hobert ’16. Hobert posted three saves and allowed one goal, a score that proved to be the difference-maker in the outcome.

O’Brien emphasized how much the team values communication skills, especially in the close games that have taken place.

After playing tied for almost 40 minutes, the Brewers sent a deep cross in from the left side of the field. The pass found its target, which was the foot of a Vassar player, and the ball soared into the net from six yards out to give the away team a 2-1 advantage in the 70th minute.

Wesleyan could not recuperate from the late score and still found itself winless after being outshot by the opposition 26-9 and 8-5 in shots on goal. More specifically, Vassar dominated the second half with 15 shots to Wesleyan’s four. The Brewers also had two more corner kicks than the Cardinals and were penalized one less time than the home team.

“Communication and inconsistency,” O’Brien said, when asked about why she thought the team lost. “It wasn’t one person’s fault, but a team breakdown. I thought we worked really hard on our work rates and tried to stay consistent, even when we were down.”

Keane and Tess Daggett-Edenholm ’17  led the team with three shots apiece, and Keane led all Redbirds with two shots on target, including the aforementioned goal.

The Cardinals started two first-year players in the game: midfielders Ellie Dempsey and Meghan Cunningham. Dempsey made her second start in three games and Cunningham made the starting eleven for the first time in her Wesleyan career.

“[First-years] all have such great attitudes and we’ve all been really impressed,” O’Brien said. “Their work rates are really good and we also have awesome chemistry with them already.”

Wesleyan has its third non-conference matchup this season this upcoming Saturday, Sept. 13, against the Babson Beavers. The Cardinals have only played the Beavers once before, but it was last season, with the game ending in a 0-0 draw and each goalie finishing with two saves.

“I think that in order to win, we need to stick with our greatest strength, which is team chemistry,” O’Brien said. “If we all stick together, then we will pull out a win, because we all want to play for one another, care about each other, and win together.”