A sitcom about a talking horse gets funnier as it gets bleaker. 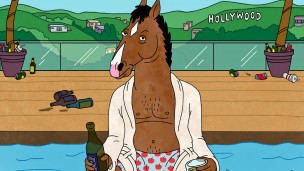 You have to give Netflix credit: in the two years since it first explored the realms of Internet-distributed original programming, it’s done a good job of hedging its bets. So far it’s dipped its toe into essentially every genre out there, putting tremendous resources into comedies, political thrillers, horror sagas, and even kid’s cartoons. With that in mind, it was probably only a matter of time until the site decided it needed its own adult-oriented cartoon, especially in the wake of the immense success enjoyed by the FX and Adult Swim animation blocks. “Bojack Horseman” is Netflix’s entry into this weird territory, and I’ll be damned if they didn’t make some pretty interesting choices.

Set in a world populated by both humans and anthropomorphic talking animals, the show follows a washed-up actor by the name of Bojack (voiced by Will Arnett), who also just happens to be a horse. Back in the ’90s, Bojack was the star of the hit sitcom “Horsing Around,” but now he’s nothing more than an alcoholic has-been, struggling to write his memoirs and restart his career. His only real relationships are an on-again, off-again affair with his agent Princess Caroline, a cat (voiced by Amy Sedaris); a strained friendship with Todd, a human freeloader living on his couch (voiced by Aaron Paul); and a rivalry with another ex-sitcom star, a dog by the name of Mr. Peanutbutter (voiced by Paul F. Tompkins).

In the pilot episode, Bojack’s publishers, desperate for a hit book and tired of his dilly-dallying, assign him a ghost writer, Diane Nguyen (also a human, voiced by Alison Brie). With Diane’s help, Bojack tries to finish his book, a process that ultimately forces him to come to terms with his past and his immense collection of inner demons.

At the heart of “Bojack Horseman,” two kinds of shows operate simultaneously. On the one hand, there’s a misanthropic Hollywood-centric comedy, sort of a cross between “Curb Your Enthusiasm” and “Entourage.” The early episodes tend to lose themselves in trying to grab for relevance in modern celebrity culture. There’s the obligatory episode where Bojack offends somebody and the media completely sensationalizes the incident; and where would a show about Hollywood be without one of the “Horsing Around” child stars returning as a drugged out hyper-sexualized pop star, looking for someone to enable her habits? While these episodes are reasonably funny, they feel like they’re trying too hard to rehash points we’ve all heard before. Admittedly, the animated style does allow the show to take these tropes to a more surreal and anthropomorphic place. Yet turning certain characters into their animal equivalents often feels like the only way the show tries to keep itself aesthetically interesting.

As the show continues, however, it manages to find its focus in a study of its protagonist. From the beginning, Will Arnett does a great job voicing the character, but it doesn’t feel like much of a stretch for the undisputed king of TV jerks. Without giving too much away, in the fourth episode Bojack does something that goes beyond the normal realms of a comedy and enters the regions of being downright irredeemable. This is where things start to get interesting, becoming essentially a redemption story, minus the redemption at the end. Over the course of the season, Bojack suffers a dark, downward spiral, and at the end of his journey, the only real revelation he finds is that maybe some people just are incapable of changing and acting like good people.

The more the study of Bojack’s psyche progresses, so too does the complexity of the supporting characters. At first Diane seems to be present solely for a love triangle between herself, Bojack, and her boyfriend, Mr. Peanutbutter. The show moves to reveal that she, too, is really struggling to find happiness, even if that means settling for a relationship she doesn’t really care about. Likewise, Todd, who at first just seems like a stereotypical slacker, steadily starts to become aware of both his own propensity for failure and the way Bojack repeatedly manipulates him for his own schemes. Even Mr. Peanutbutter, who’s annoying at first because of his naïve stupidity (in a respectable, dog-like way), eventually stands out as the only character not completely consumed by narcissism and cynicism. As different subplots develop, an ultimate unifying factor between all the main characters emerges: the oddly depressing realization that the happiness they’re trying to find in what they do might just be out of their reach.

“Bojack Horseman” is a show worth sticking with because it gets funnier as it gets bleaker. The jokes become sharper, the plots more interesting, and they even pull in a handful of pretty impressive guest stars (Stephen Colbert, Patton Oswalt, and even Naomi Watts make appearances). At the same time, however, it’s willing to take its characters to dark and irresolvable places, which in turn makes the humor stand out even more as a relief from the depressing moments of nihilism. This is the show’s greatest saving grace. It’s one thing when a comedy makes you laugh; it’s another when that laughter is followed by some very sad contemplation. Not bad for a sitcom about a talking horse.