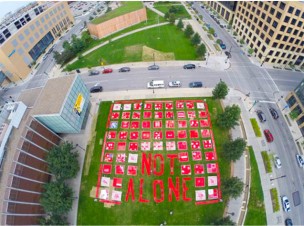 Between the open letter about sexual violence published in The Argus last April and the series of messages regarding victim blaming projected onto South College last May, this past spring saw a resurgence of feminist activism on campus. Leading into this fall, some key players in last semester’s activist scene assembled to form the Wesleyan Feminist Underground. The collective hopes to organize public actions and visual displays to raise awareness about feminist issues on campus and change sexist administrative policies.

Chloe Murtagh ’15, R. Nelson ’15, and Natalie Ancona ’15, along with others, spearheaded the formation of the group through a series of actions calling attention to feminist issues on campus, particularly the controversy surrounding the sexual assault case at Psi Upsilon (Psi U). These projects included the distribution of a zine entitled “Trigger Warning” and several posters highlighting the prominence of sexual violence at the University.

“I think that the casual activism was pretty organized from the start,” Murtagh said. “The direction, kind of like an undiscussed mission statement, was there based on the actions that we planned last semester.”
Because of the widespread involvement in last year’s more informal activist scene, the Feminist Underground has already gained traction as an official campus group. Murtagh and Nelson, who consider themselves highly involved members of the group rather than leaders, noted that the group’s email list already contains about 60 names, and that many students have reached out to them expressing interest in joining.

The Feminist Underground’s first meeting will take place in the evening on Tuesday, Sept. 2, at Espwesso. At this meeting, members will be encouraged to freely express their thoughts on feminist issues, both on and off campus, and to share their goals for the coming year.

The Feminist Underground’s first action as an official campus group was co-sponsoring The Monument Quilt, a visual exhibition that will be displayed on Foss Hill on Tuesday, Sept. 2. The project, organized by the activist group FORCE: Upsetting Rape Culture, documents the stories of survivors of sexual violence and assault through a nationwide tour, the last stop of which will be Wesleyan.

In addition to the display of the quilt itself, the Feminist Underground will host an exhibition of artwork by survivors of sexual assault and allies. Additionally, the group will hold a discussion on intersectional attitudes toward sexual violence, a poetry workshop, and a filmmaking workshop.

The Feminist Underground does not yet have clear plans for future projects, but one of the group’s major goals is to create a safe and accessible method for reporting instances of sexual violence on campus. Currently, there is no uniform system in place for notifying the administration of assault; instead, it is handled on a case-by-case basis, which members of the Feminist Underground believe creates a culture in which reports of sexual assault are questioned and even discredited.

“Right now, the problem with reporting is that there’s no written process of what it’s supposed to be like, so it’s different for every student, which ends up being really harmful for a lot of people who report,” Ancona said.
Last year, feminist activism on campus mainly took the form of public art displays and other image- and text-based exhibitions. While many of the Feminist Underground’s members are inclined to visual expression, the group’s work is not confined to art.

“We have a lot of people who have that already as their modus operandi for activism for public displays, but it’s not strictly art,” Nelson said.

In fact, the urgency of the issue of sexual assault may lead the group to take more drastic measures this year.
“I imagine we’ll have some protests this year,” Ancona said.

Though nothing is set in stone, several potential guest speakers have already reached out to Murtagh and Nelson about speaking to the group. Additionally, the group’s senior members will encourage new members to present ideas for projects that they feel passionately about and will promote an atmosphere of collaboration and support.

“Each person can bring up any project that they would like to work on and they know that they have support and people that are also going to be interested in working on it, and a mass of people that are willing to put their weight into it, and a method for getting some funding,” Murtagh said. “So the idea is that it’s just a group of people with general common goals that are going to be willing to support any idea that anybody has.”