Consent is So Frat Encourages Discussions Regarding Sexual Assault Within Fraternities 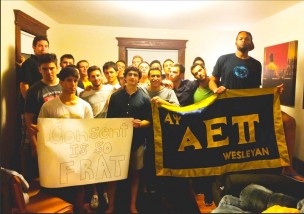 In response to the recent discussions on campus concerning Greek life and sexual assault, multiple students—both in support of and in opposition to fraternities on campus—have spoken up in various forms. One recent graduate, Matt Leibowitz ’14, started an organization this past summer called “Consent is So Frat” and published an article, titled “Why I Stayed in My College Fraternity and Became an Activist.”

Leibowitz wrote the article in response to a previous article written by Scott Ellman ’15 on Mic.com. This article, titled “Why I Quit My College Fraternity,” explained Ellman’s experiences in his fraternity, in addition to addressing the reason he chose to remove himself from the University’s Greek community.

“When I read Scott’s article on Mic.com, I recognized that clearly there were fraternity brothers who found themselves struggling between wanting to support a culture of consent and wanting to be in their fraternity,” Leibowitz said. “I wanted to point out the ability to be both and to share that further with an organization.”

Leibowitz explained that his main goal in creating this organization is to make consent and healthy relationships part of the conversation in fraternities. The article he wrote was an extension of the work he had previously done at the University in bringing a conversation about consent into Greek life.

In addition to his article, Leibowitz’s campaign includes social media accounts (Facebook and Twitter) and product messaging with items such as T-shirts and Solo cups. The organization is currently selling these products on request in bulk to schools. The goal is to raise enough funds to set up an online shop to sell the products individually.

According to its Facebook page, the organization is intent on recognizing the need for these discussions to occur, and its objective is to create a movement of fraternities becoming allies in combating sexual violence and rape culture on campuses.

“I would like to propose an alternative to leaving,” Leibowitz wrote in his article. “…I participated in Greek Life while at Wesleyan University…I struggled with the seemingly contradictory nature of my desire to be an ally and my membership within my fraternity, Alpha Epsilon Pi. I was in the process of joining my fraternity when the discussion over the case at Beta Theta Pi was taking place. I nearly made the same decision as Scott, however I chose to stay in my fraternity…I just decided to follow the strategy of taking on a system from on the inside.”

The article also explained that as time passed, Leibowitz found himself becoming what he considered a fraternity activist. With this newly acquired role, he took the initiative of discussing the issues directly with his brothers.

“Never before have they been talked with about consent and fraternities, rather they would be talked at,” Leibowitz writes in the article.

He also noted that when he first began this conversation with his brothers, it was a little uncomfortable. However, over time, the conversation became lighter.

“While I was at Wesleyan, bringing the conversation to AEPi and to other fraternities as well, the conversations were awkward but encouraging,” Leibowitz said. “It made space for individuals to ask honest questions like how to ask for consent in the least awkward way possible.”

Leibowitz explained that he does not want these ongoing open dialogues to stop at the University; rather, it is imperative that the ideas being discussed spread to other campuses.

“Working with other fraternity brothers as well as activists who believed in making this connection, we formed Consent is So Frat as a way to expand the conversation to fraternities around the country,” Leibowitz said.

Currently, Consent is So Frat is working with fraternity brothers from colleges coast to coast, both with administrations and with individual chapters.

The organization is also looking into visiting other campuses to facilitate these conversations.

“We recognize that Consent is So Frat is by no means the only thing campuses should do to prevent sexual assault,” Leibowitz said. “We are hoping that we can simply start individuals in fraternities talking and encourage leadership on this issue.”

Leibowitz also explained that he recognizes that fraternities and sexual assault are frequently in the news together. He hopes to continue that connection, but instead with the notion that fraternities are taking a stand to promote consent and combat violence.

“As an organization, our goal is to make being a fraternity brother and supporting consent one and the same,” Leibowitz said.

Ellman, commented on his excitement for Consent Is So Frat, despite the fact that he had written the original article on why he departed from Greek life,

“I look forward to seeing what kind of positive impact Consent Is So Frat makes on the Wesleyan community,” Ellman said.

Leibowitz and Emma Singer ’15, Consent is So Frat Director of Operations, have been working together to make sure the Wesleyan community can get involved in the organization despite the fact that Leibowitz is no longer on campus. Students can contact either Leibowitz or Singer in order to join the campaign.

“President Roth and the Wesleyan trustees are currently deciding the fate of Greek life at Wesleyan,” Leibowitz wrote. “While I care deeply about the fate of Greek Life at Wesleyan, it’s important to look past our one campus to fraternity culture in general…It is unquestionable that fraternities need to change to make their communities safer. I chose to see the chance to take an institution which provides a home for so many college men and work towards making it an organization which builds allies and bystanders.”

The organization also launched its Consent is So Frat Photo Campaign on Monday, Sept. 1. The campaign is a movement to encourage fraternities to take a picture as a chapter with signs showing their support. The photo campaign’s goal is for brothers to use social media to share that they believe consent should be part of what they value as an organization.

Correction: An earlier version of this article listed Emma Singer as the Consent is So Frat Wesleyan Representative.