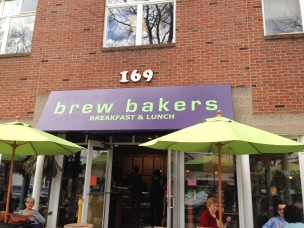 Ah, springtime at Wesleyan: Foss Hill is bustling, Chance the Rapper is coming, and you’re suddenly down to the last of your meals and points. A maxed-out meal plan can be disheartening, but it’s also a good excuse to check out some Middletown eateries. An early afternoon meal at 169 Main Street is a compelling alternative to groveling for guest meals at Usdan.

Brew Bakers offers an extensive menu of breakfast and lunch dishes as well as several daily specials. The food is prepared on the premises by chef and co-owner Josef Aigner and executive chef Michael Leister. Popular menu items include the Brew Boilermaker breakfast wrap, which contains marinated steak and roasted potatoes, and the garbanzo bean and carrot hummus sandwich. The pastries, which include assorted muffins, cookies, and bars, are freshly baked each day.

Brew Bakers can get busy, but it seldom feels crowded. Floor-to-ceiling windows carry light into the room, opening up the already-spacious restaurant. The cheerful yellow walls are covered in art collected by owner and manager Eloise Tencher, and a soundtrack of folk classics and eclectic world music, also handpicked by Tencher, plays in the background. A dark-haired woman in a flowing caftan, Tencher herself is a warm presence. On a bright Sunday afternoon, she floats from table to table, catching up with regular customers and making sure that newcomers are comfortable.

In the kitchen, Aigner (Tencher’s husband) and Leister are hard at work, rolling out hamburger meat and flattening it into patties. Burgers are Aigner’s specialty—there is even one on the menu named after him—and the staff takes pride in its freshly ground meat. As Leister places a patty on the tray, Tencher points out the meat’s bright red hue.

“When you buy it in the supermarket, the inside is going be gray and the outside is going to be gray,” she said. “We just grind it.”

For the restaurant, Aigner and Leister also make sausages and cure meat and fish such as corned beef, pastrami, and ahi tuna. Collaboration plays a major role in the Brew Bakers kitchen. Aigner and Leister regularly bounce ideas for specials off one another and are not afraid to get creative with their menu. Aigner, who is from Salzburg, Austria, has taken inspiration from his hometown’s cuisine when creating specials. Leister, a Connecticut native with over 30 years of restaurant experience, once based a special off of a gustatory dream he had.

“One time, I had a dream,” Leister said. “It was Martin Luther King Day, too, so it was weird. It was like, totally bizarre. I played around with it and just switched it around.”

Leister doesn’t remember what the dish was, in part because playing with food is fairly commonplace in the Brew Bakers kitchen. Once, when a batch of muffins crumbled, Leister used the pieces to construct a cake. Another time, a tray of seven-layer bars got burnt, and Leister used the crumbs as a coating for a ball-shaped chocolate dessert.

Waste, in general, is frowned upon at Brew Bakers. The staff aims to minimize the amount of food that is thrown out by using ingredients to their full capacity. The remains of vegetables, for example, are regularly boiled to create a stock, which is used as the base for soups.

“At [other] restaurants, they throw all that stuff out, but as much as it will let us, we’ll go to the very end,” Tencher said.

Aigner handpicks the ingredients for Brew Bakers at a bulk shopping market in Hartford called Restaurant Depot. By eliminating the middleman, the staff keeps prices down and ingredients fresh.

Tencher and Aigner bought Brew Bakers from its original owners in 2008. Previously, Aigner worked with Leicher at a fine-dining restaurant in Manchester, CT. He had grown tired of the long hours his job entailed, and since attending culinary school in Austria, he hoped to purchase an eatery of his own. Tencher, too, had experience in the restaurant industry, but unlike Aigner, she had reservations about purchasing a restaurant.

After the couple purchased Brew Bakers, they, along with Leicher, worked hard to reorganize it. They cleaned the kitchen thoroughly to ensure it met health code standards. They also replaced staff members they felt lacked skill and had been hired simply as a result of nepotism.

“When we opened this restaurant, it was really down,” Aigner said, “so we just brought up the food quality and stayed with the same price at the beginning.”

Though prices have been raised since 2008, affordability has remained a priority. By keeping prices low while ensuring quality products, Tencher has built a committed community of regulars at the eatery, many of whom are Wesleyan-affiliated.

Tencher, who also works as a DJ at WESU, cherishes her close bonds with Wesleyan students and especially admires their good manners.

“I’ll tell you, the best part of my job is [interacting with] the Wesleyan kids,” she said. “In my experience, they have all been super nice, really polite. And when I meet the parents and they come for graduation or parents’ weekend, I always tell them, ‘You’ve done such a great job here.’”

That said, Tencher has been hesitant to hire Wesleyan students as cashiers and waiters. Though many are qualified for the job, Tencher notices that students’ schedules fill up over the course of the school year, leaving them too busy to commit to their jobs at Brew Bakers.

“Sometimes I do [hire Wesleyan students], but most of the times, they come here with all this availability, and the next week they say to me, ‘Oh, I have this class, and so I can’t work here on these three days,’” she said. “And it’s really bad…I just wish the classes wouldn’t interfere, but they do because it’s during the day.”

Academic commitment may prevent you from getting a job at Brew Bakers, but it doesn’t necessarily have to stop you from visiting the eatery regularly. The restaurant’s spacious wooden booths, in fact, serve as workspaces conducive to studying and essay writing. The coffee is strong and will fuel you through your studies, but be warned: you’ll have to pay for refills.