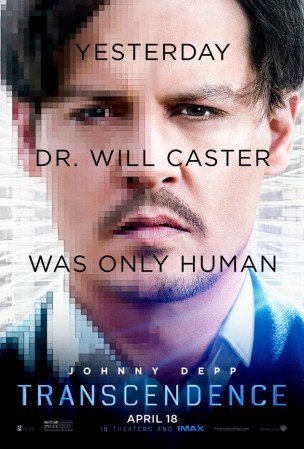 In the wake of “Her” and all of its critical success, a trend came about on YouTube that involved substituting in the voices of various actors for that of Scarlett Johansson in the film’s trailer for comedic effect. All of these videos were a great deal of fun, and I still return to some of them when I’m bored.

I can only imagine that it was this trend—taking the template of “Her” and switching around a few of the details in order to make something goofy—that led to the creation of the new release “Transcendence,” which was directed by Christopher Nolan’s regular cinematographer Wally Pfister. The film stars Johnny Depp as Dr. Will Caster, a scientist working to create some sort of artificial consciousness that neither the film nor I really cared about. After an attack by some terrorists who really don’t like A.I., Will is left wounded by a radioactive bullet. In order to prevent him from dying, his wife uploads his brain into a big network of computers. In that moment, Will Caster is more than just a man. By God, he is a metaphor.

Over the course of the film’s nearly two-hour runtime, many things are revealed, and it’s suggested that Will is not Will anymore, or that Will in the computer was never Will, but really the computer brain that Will was trying to create. And then Will helps the F.B.I. And then he fights some terrorists. And then the film ends with the most profoundly baffling promise of a sequel that I’ve ever seen in a movie, involving someone’s brain being preserved in the molecules of water under a sunflower, or something along those lines. Also, Morgan Freeman is in it, because that man must just get off on this sort of pointless science-fiction/action/thriller bullshit.

It’s both all too clear and never quite clear what “Transcendence” is trying to tell its audience. In fact, after watching the movie, I can’t gather any more from what I witnessed than, “Maybe computers and people should be, like, two separate things.” There is, of course, the sense that this film wants us to be scared of something, but it’s never clear exactly what (besides, maybe, the exact, step-by-step scenario it presents, in which case, I’ll be sure to be careful).  “Transcendence” is dumb and pretentious and hammy and boring, lurching between pseudo-intellectual, technological fear-mongering, and flavorless, half-assed action set pieces. It’s not concerned with the humanity of its characters, but only what they can tell you, the viewer. No one in this movie matters beyond hir role in the film’s argument, and not a single detail of the characters, the world, or the technology is textured in any unique way.

This is the film equivalent of an email forward about Google stealing your personal information: paranoid, angry, half-baked, and self-righteous. It’s the kind of film that reeks of its own convictions, certain that what it has to say is so valuable that the viewer will be happy to attend a polemic rather than a film. It tosses impossibility after impossibility at the screen, and demands to be taken seriously, vomiting Judeo-Christian theology and symbolism alongside Will’s vague plans for world domination. If there’s one thing to be said for the film, it would be that the visual style is appealing. Unfortunately, as “Transcendence” kicks into incoherent overdrive, even this falls by the wayside.

It’s no secret that science fiction has always been, in large part, a vehicle for allegory and cautionary tales. It’s a genre designed to confront the unknown that we may soon have access to, to ask us how we want to move forward. If “Transcendence” and its failure can be summed up in any way, it’s that those questions are never there. The film never wants its audience to ask itself anything. It only wants them to listen up. And when the ending rolls around, we discover that either nothing was learned, or the message didn’t matter. And that’s disheartening. “Transcendence” is disheartening. Don’t see “Transcendence.”