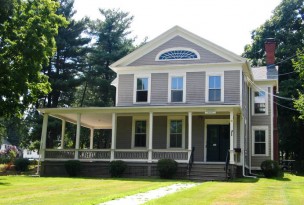 Cooking can be a great way to bring a program house together and to foster independence while residents learn to live away from home. Full House, the red-trimmed Victorian on the corner of Washington Street and High Street, has capitalized on this approach with its program theme: food. Outhouse, located on High Street, has also expanded its programming to include food-based events, providing brownies at Tuesday meetings and offering “pseudo-outings” such as granola making.

Alexandra Fireman ’16, a member of Full House who makes food three to four times a week, said she started cooking in college to supplement her other options.

“About halfway through my freshman year, I realized just how much I missed home-cooked meals,” Fireman wrote in an email to The Argus. “Though Usdan actually does a pretty good job in terms of variety and good food, eating there every day was starting to be a bit much. I tried cooking in the small Clark kitchen, but quickly realized I would love to live somewhere where I would be able to cook often and start experimenting in the kitchen. Full House seemed like the obvious choice.”

Fireman particularly appreciates the ways in which cooking builds community among her fellow residents. She herself enjoys making cakes and other treats as gifts for friends.

“[I] love making people happy through food,” Fireman wrote. “Making food for someone, to me, seems like a thoughtful gesture. A good chunk of my time is spent in the kitchen with my housemates. Our weekly house dinners and/or brunches are a great time to not only cook together, but also [to] sit down and share a meal we’ve created.”

“The best part is cooking with others and sharing dishes and eating together,” Dehnow wrote in an email to The Argus. “[It means] great conversation, nice music, [and] casual enjoyment of each other’s company. Cooking brings people together through a common action and towards a common goal. It’s like a team sport…You’re all contributing to something delicious.”

However, neither Full House nor Outhouse’s kitchen dynamic is perfect, and student chefs have had to adjust to the limitations of their “staffs,” especially when it comes to dishwashing duties.

“Since there are over 30 people living in one house, dishes are constantly being used, but not always being washed,” Fireman wrote. “The hardest part about cooking in Full House is finding clean dishes and counter space. Everyone is supposed to do their own dishes…[but] this doesn’t always happen. The dish situation is basically the only source of conflict in the house, but it’s been a prevalent one.”

Dehnow and his fellow residents of Outhouse have faced similar challenges with dividing cleanup, although to a lesser degree.

“We try to have people just wash their own dishes, but that doesn’t always work out so well,” Dehnow wrote. “Oftentimes, Jesse [Lieman-Sifry ’15], our house dad, ends up cleaning up a ton of assorted dirty dishes. It is a source of minor conflict in the house.”

Both Outhouse and Full House have also dealt with some unpredictable behavior from their kitchen equipment, namely the oven and stove.

“Once, one of our stove burners exploded,” Dehnow wrote. “We called Physical Plant and they came and replaced it, but it was quite startling.”

In Full House, the problems with equipment are even more consistent. Fireman advises future residents to bake food at 25 degrees lower than the recipe recommends and to allow extra cooking time due to the quirks of the ovens.

“The ovens in our house are quite temperamental,” Fireman wrote. “Baking, especially cookies, can be difficult if you don’t know the exact set up.”

Despite the stovetop hazards and tension-provoking cleanup, both Fireman and Dehnow remain attached to their weekly cooking rituals.

“Cooking at times can be stressful, but also very rewarding,” Fireman wrote. “I can create a meal exactly tailored to what I want to be eating. If the vegan option at Usdan isn’t great one day, I can go home and make something for myself. Cooking in the house with my friends is also a nice way to spend a weekend night.”

Dehnow, on the other hand, values the practical aspect of cooking for himself. Not only is it a form of bonding with his housemates, but it is also a chance to plan for his future.

“Cooking makes me feel like a real, independent person,” Dehnow wrote. “I also enjoy improving my culinary skills so that I can survive after graduation.”