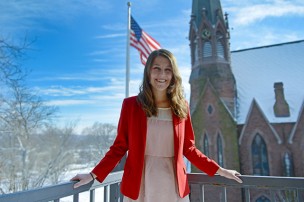 It is not every day that a college student affects governmental change. This past summer, however, Shannon Welch ’14 was able to do just that when she noticed something striking during her internship at the National Archives in Washington, D.C.

Welch was working to put together an exhibit on constitutional amendments that were never passed, ratified, or “enshrined,” as she put it. She was sifting through the more than 11 thousand documents in the archives for something interesting enough to include in her exhibition when she found the originally proposed 13th Amendment to the Constitution. But to Welch’s surprise, it looked nothing like the 13th amendment passed by President Abraham Lincoln: it permanently implemented slavery into Maryland’s state government.

“It said slavery cannot be interfered with by the federal government,” Welch said. “This is the 13th Amendment of the United States, ratified by the Senate, passed by the House, and then sent to the states.”

Called the Corwin Amendment, named after Representative Thomas Corwin of Ohio, the amendment would have prevented Congress from rescinding state slavery laws. Both houses of Congress approved the amendment in 1861.

Upon doing more research, Welch determined that only two states had ever ratified the amendment: Maryland and Ohio. Illinois ratified the amendment through constitutional convention, but it was later considered invalid. Midway through the Civil War, in 1864, Ohio rescinded its ratification. But Maryland, Welch’s home state, did not.

Welch, a history buff, continued to research the process by which amendments are rescinded. She learned that she could contact her state legislation and ask it to propose a bill to rescind ratification of the amendment.

“There is just a box on your state legislature that says, ‘Propose, petition, ask your legislator what you want,’” she said. “So I was like, ‘What if I rescinded this ratification?’”

The only person who returned her request in July was a University alumnus, Senator Brian Frosh (D) ’68. He said he was interested in aiding her and correcting the issue. Later, Frosh and Welch also realized that she had gone to elementary school with his daughter and bonded over their experiences at Wesleyan.

Welch did not hear back from Frosh again until December, when his aide asked her to submit testimony on the issue. She learned that they would bring the issue to the floor as the first bill of the new session in January 2014.

On Feb. 19, Maryland’s State Senate voted unanimously to rescind the Amendment. Currently, the measure is set to travel to the House of Delegates.

Welch’s experience falls right into her areas of interest. At the University, she double majors in history and government, and she plans to attend law school next year. Though a job in government is probably on the horizon for Welch, history still plays a major role in her activities: she is currently writing a history thesis and also serves on the History Majors’ Committee.

“[History] is involved in every field you study, so I’m excited to bring what I learned at Wes history-wise to my law career,” Welch said.

In 2016, the exhibit that she spent the summer collecting will go on display in the National Archives, and Welch is excited to return to see her influential work on display.

At this point, Welch envisions herself as becoming a prosecutor in criminal court, pursuing victims’ advocacy.

“I always like activist work, and I think that applies not only to law but to history, [in terms of] making people care about history,” Welch said. “Why should people care about this amendment that got passed, but not ratified, 150-plus years ago? There’s a new 13th amendment, so why does it matter? It matters because it’s a time in history and it’s part of who we are as a country, and being from Maryland, it’s part of who I am as a Marylander.”

By recognizing our history and its implications, Welch says, we can notice flaws in our system and, with a little motivation, pursue the means to correct them.