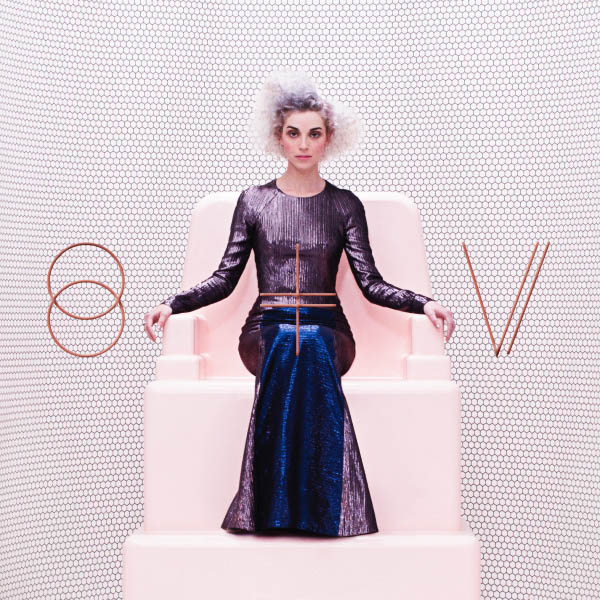 In order to understand the musical evolution of Annie Clark (known most commonly by her stage name St. Vincent), one need only look at the covers of her albums. This may seem like an aggressively reductive way to approach things, but it’s also an unfailing thematic primer. Clark’s first two solo records (following her work as a member of The Polyphonic Spree, and a stint in Sufjan Stevens’ touring band), Marry Me a-nd Actor, offer staid portraits of their creator, conjuring, if not something delicate or fragile, certainly something ethereal. Otherworldliness has always been a potent characteristic of St. Vincent’s music, but it first manifested as something far different than what it has become.

On her most recent self-titled LP, St. Vincent is still otherworldly, but everything about that beautiful strangeness has shifted. On the cover, she resembles an empress more than an angel, staring out with steely determination and presiding over a throne room that appears to be somewhere a scantily clad Jane Fonda would be dragged for space-trial. It’s a stark and jarring contrast, and, upon examination, indicative of St. Vincent’s growth as an artist. She has gone from empyrean to imperial, and the results are magnificent.

This is not an album that twiddles its thumbs: it roars right off the starting block with “Rattlesnake,” the true story of how a naked Annie Clark came upon a rattlesnake and ran away. It’s a good story when Clark tells it in interviews, and it’s even better when she sings about it. There’s a libatious, Kraftwerk-esque sound to the whole thing: the pumping rhythmic orchestrations, the crackling vocals, the effortless poeticizing of the whole thing, even as Clark suggests that the song has no deeper meaning. I have no doubt she’s telling the truth, but it serves as a testament to her skill that her recounting of the memory can grow so organically into something seemingly greater: the chapped and writhing creation myth of some special, digital Eden.

St. Vincent follows “Rattlesnake” with “Birth in Reverse,” the album’s first single and a perfect sample of what is to come. Anchored by Clark’s superb guitar, it’s a driving and baroque song, a great, gothic cathedral of electricity spouting upward and outward in bursts of infectiously ragged vigor. The lyrics are wry and playful (the opening line being the most commonly cited example: “Oh what an ordinary day/Take out the garbage, masturbate”), while still moving beyond any sort of self-conscious cleverness. It’s a song that plays with its ambitions while never tempering them, and it is a cosmic joke about the notion of artistic creation and the growth of meaning in a work.

The album is bursting with songs like this, energetic and heady, lively and playful and smart. As Clark’s guitar lines intermingle with horns and percussion, the lyrics build and subvert, reaching toward some wonderful sort of shimmering synthesis of the visceral and the abstract. There’s always something larger going on in the music, and it’s fun and worthwhile to tease out. However, there’s also so much sumptuous insanity going on at the surface that one could get wonderfully lost in just the sounds and nothing else.

This may well be the greatest strength of the album: how its thematic and sonic fullness have colluded to create something so wickedly intricate, yet so elemental and digestible. Certainly, there are moments on the record that detractors might easily deem pretentious, but there’s so much going on that to pick out lines or moments of “pretension” misses the point of what Clark has made. Where “I Prefer Your Love” takes a blatant potshot at religion, it also cheekily and wonderfully couches itself in cresting psalm-like melodic currents. Where “Digital Witness” wages war on technology, it also creates a pulsing landscape of electronic anxiety. The whole of St. Vincent revels in seeming contradiction (Clark’s voice alternating between a supple sweetness and distorted crackle, the intertwining of the unabashedly goofy and the expressively poetic in the lyrics of the album’s opening song), embracing its contrasts and internalizing them in order to reach for some deeper valence of truth.

In this way, St. Vincent’s new album becomes, much like “Birth in Reverse,” about meaning itself, about how the search for that meaning, especially in the new digital realm, can lead to disconnection. Does Clark’s encounter with the rattlesnake get filed under religious symbol or ridiculous anecdote? How do we derive personal definition in the digital and systemic world of the formulated individuals? What do we want to connect with in each other? How do we locate that?

For Clark, the answer seems to be full on assault: the rush of jagged guitars; the whooping of choral lines; the poetry of crashing, throbbing, exalting compositions that make the emotional sensory and the sensory emotional. If anything, the otherworldliness present on St. Vincent is about the remaking of the materials before us: revision, reaction, redefinition. Maybe it’s this slightly whacked and beautifully misaligned familiarity that makes everything on display here so deeply moving and exciting.