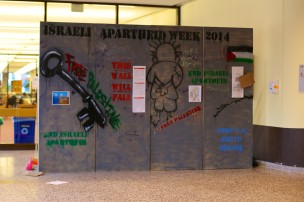 Around the world, the week of Feb. 24-28 is recognized as Israeli Apartheid Week, a pro-Palestine awareness event. Wesleyan Students for Justice in Palestine (WeSJP), a group that promotes justice, human rights, and liberation for the Palestinian people, has sponsored a version of this awareness week at the University.

“Israeli Apartheid Week (IAW) is an international series of events that seeks to raise awareness about Israel’s apartheid policies towards the Palestinians and to build support for the growing Boycott, Divestment, and Sanctions (BDS) campaign,” the official website reads.

Harry Russell ’17, a member of WeSJP, stated that the week is a time to encourage campus dialogue about the Israel-Palestine conflict.

“[It is] for…students who are already familiar, who come from Jewish backgrounds or Palestinian backgrounds, or who are just interested in history and post-colonial movements,” Russell said. “But [the week also serves] to capture the attention of students who have maybe never heard of this issue, who don’t really know much about the politics of the region or the history, [and] to basically introduce the struggle to them as one of many struggles against colonialism and imperialism and generally against oppression and for freedom and self-determination and human rights.”

Russell stated that WeSJP has tried to recreate some of the primary symbols of the Israel-Palestine conflict to promote Israeli Apartheid Week.

“We built a mock separation wall, loosely based off of the separation wall between the West Bank and Israel and just tried to put some similar graffiti as to what is on the wall around Bethlehem especially,” Russell said. “We placed infographics and facts, and every day we’re replenishing the folder with articles.”

Becca Caspar-Johnson ’15, director of J Street U at the University, stressed that she does not find the event to be a positive

way of generating conversation. J Street U supports a two-state solution, and is unaffiliated with Israeli Apartheid Week.

“We don’t think the occupation [in Palestine] is right and we’re trying to end it,” Caspar-Johnson said. “But our model for change is you need to change the conversation, which means there needs to be a conversation. We see a problem with Israel Apartheid Week in that it uses tactics that just shut people down and make people feel defensive and attacked.”

Rebecca Markell ’14 stated that the wall was not effective in creating dialogue and was a sensitive symbol that emotionally disturbed University students.

“For me, it unnecessarily condenses this really complex conflict into one melodramatic piece of furniture,” Markell said. “It’s really painfully emotional to see this piece of hate. That’s something that represents hate of me, all of my family who happens to be Israeli, and people I know that love and support Israel, and that’s not saying that they don’t criticize it, but that they have an identity with the country. So I guess the main problem for me is that I don’t see it as creating dialogue; I just see it as expressing hate.”

Markell continued, expressing concern about the negative impact the wall may have on students’ attitudes regarding the Israel-Palestine conflict.

“The main emotion that I’ve heard is people sad that this is what we’ve come to, that we’re so unable to create a dialogue that someone has to put up a wall,” Markell said.

Emma Golub ’16 stressed that people who were uninformed about the Israel-Palestine conflict may be influenced by the wall to support one side without learning about both sides’ positions.

“It’s difficult because if someone who doesn’t know that much about the conflict walks by this banner, it’s very eye-grabbing, and it’s right there, and I can see myself if I didn’t know anything about it being like, ‘Yeah! This is awesome!’ but it’s very one-sided,” Golub said. “I totally think we should criticize and challenge what Israel is doing, but [while the wall] might produce dialogue, I don’t think it would produce friendly dialogue.”

Russell expressed curiosity toward negative reaction to the wall, saying he hoped to speak further with those who felt emotionally disturbed by its presence.

“First thing I would ask them is why they feel that way, seeing as the wall represents a real thing, and it’s not an exaggeration in any way,” Russell said. “If anything, it’s much smaller than the actual scale of the wall, which is a good 40 feet high and covers a much larger distance. I think many people who would be offended might be offended simply due to a lack of knowledge.… I would be mostly interested in why they’re offended, because that’s not our purpose. I don’t really see how that can arise.”

Golub also feels that the word “apartheid” is an incorrect term to describe the events in Israel.

“What’s happening in Israel is not apartheid,” Golub said. “I posted a video in our [group’s] Facebook group that’s a member of the South African Congress saying how he grew up during apartheid in the 1930’s and how he’s been to Israel and he’s been in a hospital in a bed in-between an Arab and a Jew being treated equally. They use the same bathrooms. It’s not apartheid. There’s certainly discrimination against Arabs in Israel, absolutely, but it’s not apartheid. This guy said that calling what is happening in Israel ‘apartheid’ is like lessening the apartheid that really did happen in South Africa because it’s the wrong term.”

Parent ’12 Robin Kelley, a Professor of U.S. History at UCLA, expressed a more neutral view, stating that he was not surprised by students participating in Israeli Apartheid Week at the University, especially due to the frequent involvement of students in social justice issues. Kelley previously denounced President Michael Roth’s position on American Studies Association’s boycott of Israeli Academic Institutions.

“Your school has a long and noble history of student activism, but more importantly, of student questioning, interrogating, struggling with hard issues,” Kelley wrote in an email to The Argus. “Historically, neither the students nor faculty have been provincial, nor has there been a history of knee-jerk reaction to any criticisms of Israel or any country for that matter. You are a school designed to [train] humanists in an Enlightened tradition, not hemmed in by narrow nationalisms or patriotisms, or kowtowed by fear.”

Caspar-Johnson stated that she felt Israeli Apartheid Week and the ASA’s recent boycotting of Israeli Academic Institutions both shut down conversation before it could begin.

“I think the only way to achieve change on this issue is through changing the conversation that needs to happen,” Caspar-Johnson said. “And I think that these actions were both very clear examples of conversation being shut down.”

Markell described a potential project that Wesleyan Students United with Israel is considering in response to Israeli Apartheid Week. The project would aim to gauge student reaction to the wall and coordinate a productive response.

“[We are considering] having individuals write why they support Israel, why they don’t support this action, and holding it up and making some sort of collage or poster and putting it somewhere on campus, or even a video of it,” Markell said. “Having it be Wesleyan voices is the way to go because…we want to hear why and where they’re coming from and have their views shared around campus.”