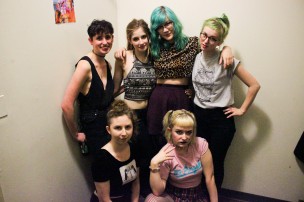 Out of all the fresh music on campus, one of the newer groups that demands Wesleyan’s attention is the all-girl pop-punk band Faceplant. Formed last semester, the band consists of Amy Mattox ’17 and Blaise Bayno-Krebs ’16 on vocals, Sophie Chabon ’17 on bass, Molly Hastings ’17 on keyboard, Ann Surber ’16 on guitar, Isadora Spillman-Schappell ’17 on drums, and Ella Weisser ’17 on tambourine (and doubling as the band’s hype-woman). I had a chance to meet up with the band’s members, huddled together on the fire escape outside of Art House, to talk about their history, their music, and whether or not gender plays a part in their music.

The Argus: So, I think I first heard you guys pretty early last semester when you were practicing in Westco 1, blasting out into the courtyard. When did you guys actually come together?

Sophie Chabon: I think it was, like, September. Molly said she wanted to create an all-girl band and it just sort of happened.

Molly Hastings: We all just kind of found each other and were like, “Hey, we’re friends and, conveniently, all play instruments.”

A: This show at Earth House was the first time you guys ever headlined a show. How did that feel?

SC: It was a little scary.

MH: It was very scary.

Blaise Bayno-Krebs: I think tonight was our best show just because we’ve had a lot of experience and it was hyped up a lot. Art House is a popular venue.

SC: I also think we’ve all started to get to know each other a little as musicians. Like, we know to pay attention to Izzy now when she counts us in.

Isadora Spillman-Schapelle: Because it’s all about me.

A: Having seen you guys play two weeks in a row, I need to give a lot of credit to the way you really manage to rile up the crowd. Even at Panty Punk it seemed like some of the craziest moshing was when you guys played second. What are your thoughts on this?

BBK: I think it’s that other bands that are more hardcore than us are less melodic so that, although people are moshing, I feel like they’re moshing for the sake of moshing. With us it’s like they also enjoy the melodic things going on with the song.

SC: And we dance on stage.

ISS: It’s also not a super aggressive mosh pit, like, we encourage the girls to come to the front so it’s not super violent. It’s about having fun and enjoying the music.

MH: Ann writes most of the songs, so it starts out being like a melody basically, because it’s on acoustic guitar at first.

SC: I also think we’re all excited to be on stage, and we’re really excited when we play, and a little bit of our excitement infects the crowd, because we all want to be up there.

BBK: I’m a performer, and just, throughout my entire life that’s all I do, and when I’m up there it’s the perfect venue for me to be who I am that I can’t be in normal life, obviously. So it’s very, very important to me…our shows. It’s necessary for my existence.

A: Aside from Baby Gap, who also gave a really terrific performance at Earth House, I think you guys may be the only all-girl punk band on campus. Do you think that this influences your particular sound?

SC: You know, I think something that’s important is that we are all girls, but we still play music that an all-guy band or a mixed-gender band could play, so it is important that we’re an all-girl band. I’m glad there are so many ladies in music, but I don’t think the kind of music that we’re playing is necessarily any different from what any other band would be playing.

SC: Because that’s what we are, when you come down to it.

BBK: Even though, right now, people do come because “it’s the all-girl punk band!” I think that the more shows we play, people will just come because it’s really good.

ISS: But it’s also important to us that we…are creating a space, for people of all genders, to have it be a really open and safe environment for everyone.

MH: And it makes practicing and doing songwriting together a lot easier, because there’s no external, like, patriarchy.

A: Going back to just how riled up you guys get the crowd, would you consider yourselves a “hardcore” group?

BBK: But keeping the pop, I would like to start adding angrier and more grungy things.

BBK: We’re trying to evolve from a puppy to a real dog….

A: I know it’s going to sound weird no matter how I ask, but I’m going to have to anyway. How did it feel to strip to your underwear and play last weekend?

SC: There is something kind of liberating about playing in your underwear but also, at one point, while I was in the mosh pit, I did get groped, and I was like, “This is very uncomfortable! I’m wearing almost nothing and now I have to go on stage and play!” So there was something very freeing about being in my underwear, but at the same time, you’re aware that you’re constantly surrounded by men who are in their underwear and aren’t putting aside the fact that they know they kind of have the power in this situation.

BBK: The way I felt was that, I feel really good performing that way and I feel like if I was groped, which I wasn’t, then I would just grope them back. I feel like no one should be groping people in mosh pits but…O.K., this is a thing that happened; I said that anyone who hits into our equipment I’m going to slap in the face. And someone did that. And then I slapped them in the face and they kind of were angry, but I was like, “I told you!” So basically it’s going to be a situation where there are risks involved, so you need to be like, “Fuck the people who violate those risks!”

ISS: But those risks shouldn’t exist.

BBK: Of course they shouldn’t exist but they do, so if they’re going to happen, fuck them!