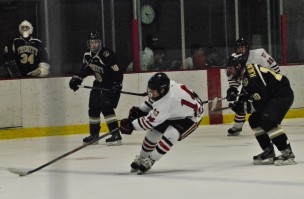 The Cardinals lost a pair of tough games to Trinity this weekend, but that’s in the past. What matters now is a shot at redemption: the two teams are headed toward a postseason matchup next weekend.

“We have to play our game and be disciplined,” said Head Coach Chris Potter. “The one thing I noticed from the weekend—and [Trinity] was the best team all year at doing it—was that they make you back-check and play smart off the puck. You cannot chase the puck and you cannot puck-watch. And the last thing is [that] pucks to the net must be followed by players with purpose.”

Mistakes from this past weekend must be corrected if the team wants to avenge last year’s disappointing 5-4 season-ending loss to the Bantams in the first round of the playoffs.

“I think we need to find a balance between the two games we played this past weekend,” said Dawson Sprigings ’17. “One game was obviously a lower scoring event while the other featured some high-octane offense. If we can find the proper balance between those two styles, which I definitely believe is within our ability as a group, I think we will find success in Hartford next weekend.”

The team started off the weekend in Hartford with a 2-0 defeat on Friday, Feb. 21. The contest was tight throughout as the Bantams scored first at the beginning of the third period and then added an empty-net goal in the closing seconds of the game.

“I liked the way we played,” Potter said. “We got out of the gate slow on Friday, but I thought our pace was better in the second period and into the third. We had some great chances. I thought both goalies played well. We did not go to the net on Friday with purpose and shot high all game, and that made it an easy night for their goalie.”

Tallying 46 saves on 47 shots fired for a .979 save percentage, Sprigings had one of his best games of the season that night.

“I felt good all week in practice, so I was comfortable heading into the game on Friday,” Sprigings said. “We had prepared as a team, going over video and studying what tactics Trinity likes to use. Any time you can get extra information regarding your opposition will only stand to help you in the future.”

Sprigings was quick to give credit to the defensive core for aiding him throughout the evening.

“My teammates did a good job of letting me get a clean look at most of the shots, which is always great,” he said. “At the end of the day it’s still a team sport, so no matter what an individual accomplishes, there is always some aspect of that, which speaks to the achievements of the team.”

The day after was a different story with the same outcome, as Trinity pounded Wesleyan 8-5. Sprigings got the day off for Cardinals in the loss when Nolan Daley ’16 returned to the ice from injury. In the losing effort, Jay Matthews ’16 added two goals and Keith Buehler ’14 had a nice outing with three points.

“It is obviously disappointing whenever you can’t play,” Sprigings said, “Every player wants to be able to help and directly contribute to the team’s success.”

Sprigings is expected to return to action for the playoffs.

“I am pretty confident it will be Dawson starting in net, but we will discuss it this week with the captains and staff and make a final decision later in the week,” Potter said.

The official decision will be made at the end of the week; the lineup is usually revealed to the players the day prior to the game.

“Coach Potter typically announces the lineup the day before the game, so I don’t believe I will know anything for certain until then,” Sprigings said. “It potentially could lend us an advantage, though I am not sure how Trinity will go about preparing to face us either way. No matter who starts in net, it will be a hard-fought game between two strong teams. Hopefully we come out on top.”

If the Cardinals have any hope of knocking off the number one seed next weekend, they are going to have to limit their penalties. In two games against Trinity, Wesleyan was penalized nine times, on which the Bantams scored four goals.

“We will have to stay out of the box on Saturday,” Potter said. “Their power play is good and they shoot from everywhere. I thought some of the calls were questionable calls, but we have to be better.”

From an emotional standpoint, the team should have no trouble getting motivated for its matchup with Trinity.

“We are excited,” Sprigings said. “Obviously, Trinity is our geographic rival, and I don’t think anyone neglects the fact that they came back and knocked us out of the playoffs last year.”

This is a game that has been marked on the calendar of every player on the Wesleyan roster. Although no one can predict the outcome, it is apparent that the Cardinals will leave it all out on the ice next Saturday, Mar. 1.

“We have been playing well and we have been playing playoff hockey for four weeks with must-wins on the road and at home,” Potter said. “We are in, and with that is a new season for everyone. We are excited for the opportunity and we know how hard it is to stamp your ticket. Our guys feel they can win every game, and this one is no different.”