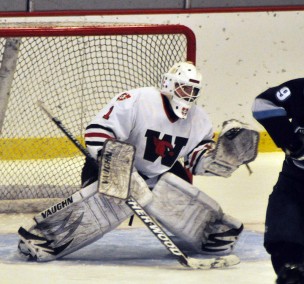 Only four rookie goaltenders in the National Hockey League have ever led their team to a championship. This is a feat that Dawson Sprigings ’17 is trying to accomplish in NESCAC play as he and his fellow Cardinals head into the latter stages of the season on a hot streak.

Sprigings has been gaining confidence with his glove and steadily improving as the year progresses. Standing between the pipes for the Redbirds, Sprigings has 482 saves and a sterling .918 save percentage. The freshman sensation sat down with The Argus to talk about the tight win over Middlebury, the upcoming road trip to Maine, and what it’s going to take to bring a NESCAC championship back to Middletown.

The Argus: Last season, Nolan Daley [’16] was starting for the team in net, and then at the beginning of this season, you two [were] splitting games. Eventually, you [took] over the starting job for the Cardinals after Nolan sustained an injury. How much were you realistically expecting to play before the season started?

Dawson Sprigings: I thought I had good chance to play coming in. Nolan’s a good goalie; he’s been hurt for a bit, but he’s back now. I’m not really sure how we’ll split things going forward, but I like to play and that’s what I’m here to do, so I’m glad that I am.

A: Playing behind the net in such a tough conference is no easy task. What do you think you’ve learned most so far in your short career as a Redbird?

DS: You have to learn to trust yourself and not get too high or low throughout the course of the season. We’ve had our ups and downs this year, and I think just staying even keel and having good practice in between games is really important.

A: A lot of players have unusual pregame rituals before they compete. Do you do anything special that gets you hyped up to play?

DS: I don’t really get too hyped up or serious, I just try to have fun. I’ll hang out with the guys and play a little handball before the game.

A: Middlebury shut you guys out last month in Vermont 5-0, and then you [came] back with a stellar performance, winning at home 2-1. What adjustments did the team make after losing the first game to the Panthers?

DS: I think we just threw the Middlebury game out. After we played, we felt that that was probably our worst game of the year and that we didn’t bring it on any level. They’re a pretty a good team, but at the same time, we felt that if we brought our game, which we didn’t bring the first time, we’d be able to hang with them and have a good game.

A: How has the chemistry in the defensive zone improved throughout the season with young guys like you, [Robert] Harbison ’17, and Nick Malone ’17 meshing with veterans like Jackson Brandstetter ’14 and Eric Casey ’16?

DS: I think it was a good meshing right from the get-go. The defense plays such an important role in our game. We made an adjustment to our defensive coverage halfway through the year, and I think that has shown up in the results: that we have really cleaned up our end. The system allows the defense to play to their strengths and it’s played real dividends.

A: Most teams that win do it while having fun. What has been your favorite part of the season so far up to date?

DS: I think getting to hang out with the guys and getting to know them. It’s a whole year process, from our captains practices in the fall, to team workouts, all the way through now. Just being around the guys is always a good time; it’s a seven-day-a-week affair, so you see a lot of the team.

A: All teams that win pride themselves on not committing too many penalties. This Cardinals team has been scored on more than any other team in the conference (17), while one of its players is in the penalty box. How [does] the team prevent itself from taking penalties, and how does the defensive core improve on killing penalties?

DS: I think it’s a commitment all the way around. We have a good group of experienced guys; even our freshmen are pretty old. At the same time, everyone knows where they have to be. I just think we’ve been a little too loose about it with guys having slightly too much stick work. We need to get that under control with playoffs around the corner because penalties can really kill you, especially in a one game playoff. As far as fixing our penalty kill, we’re working on that, and we’ll do video on every team’s power play. Hopefully, that will just keep coming together and we’ll peak at the right time.

A: Last time you played Colby and Bowdoin, each loss was by one point. The Colby loss especially stings, as you guys were up by two goals late in the third period. How do you continue to inflict revenge on opponents up in Maine this weekend?

DS: This carries some extra motivation for us in both cases. In both games, we were up in the third period, and we felt like we gave those games away. It should be a different story this time around. Coming off the high weekend we had, we have a lot of confidence, and we should to take it to Bowdoin and Colby.

A: The Mules and the Polar Bears are two of the top teams in the NESCAC at scoring first-period goals. How essential will it be for the team to get off to a good start in both games this weekend?

DS: I think it’s huge to get off to a good start. We managed to do that in both games last week. Scoring early is key because it gives you confidence and you don’t have to come from behind in any game.

A: Colby and Bowdoin are both ranked in the top half of the conference in offense, thanks to players like Colin Downey and Ben Chwick. What do you think will be the key to limiting their opportunities against you guys?

DS: That’s usually the coaches’ decisions, but usually, we’ll run special plays and line-matchups to individually shut them down; otherwise, we just try to be aware when they’re on the ice. We can’t give them too many opportunities on the power play, because that’s when they really get to shine.

A: The team hasn’t been out of the first round of the playoffs since three years ago and that was its only ever playoff win during the NESCAC era. What are the team’s expectations heading into the last five games of the season?

DS: I think we just make a good push right now and give us the best seed come playoff time. Once you get to the playoffs, it’s anyone’s tournament to win. Three wins get you the championship. It’s not a whole lot to ask for, and it can go either way.