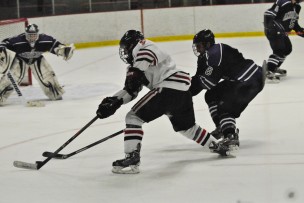 As the regular season comes to a close, each men’s hockey game is crucial, with triumphs and mistakes holding dramatic consequences. The Cardinals entered the weekend trying to move up into a playoff position and solidify their postseason fate. The team went 0-1-1, playing well against both Hamilton and Amherst but staying in its dreaded ninth position despite a powerful home-ice advantage.

“Playing in front of a rowdy crowd is great; we feed off their energy,” said Assistant Captain Tom Hartnett ’14. “The crowd on Saturday was great, and we’d love to have that next weekend as well. It’s a tremendous environment to play in.”

Against the Continentals, the Redbirds came out cold at Spurrier-Snyder Rink, letting up two quick goals with just seven minutes elapsed into the first period. Early on, it looked as if this game was going to be similar to the three-goal loss the Cardinals had against Hamilton earlier in the season. Facing a deficit, the hosts fed off of the crowd’s energy and upped the level of their game.

“We had a slow start and didn’t play well defensively,” Hartnett said. “Slow starts happen, but we have to limit them and weather the storm when they do happen.”

With five minutes gone by in the second period, Connor Ryan ’15 took control of the puck behind the net and fed it to Eric Casey ’16. Casey then delivered a pass to James Kline ’17, who was heading down the ice. Kline skated past the blue line and into Hamilton’s zone, where he fired a shot just above the goalie’s left shoulder and into the back of the net.

“I knew at that point of the game, we needed to get some shots on net, so when I entered the zone, I saw an opening in the top corner of the far side of the net and shot for it,” Kline said.

Kline celebrated vivaciously, skating toward the student section and saluting the ecstatic crowd.

“I was thrilled when I scored because I knew that it gave our team a better chance to win,” Kline said. “However, I knew that I had to remain focused on helping our team get the next one.”

Needing one more score to complete the comeback, Nick Malone ’17 picked the perfect time to earn his first career goal in a Cardinals jersey. Malone got the puck at the top left of the circle and fired a slap shot towards the back right of the goal. Once again, the puck flew over the goalie’s left shoulder and landed in the net.

“Nick’s goal came at a crucial time in the game, when we were desperately trying to stay alive,” Kline said. “I tried to position myself in front of the net to screen the goalie. Nick made a great play at the blue line and came through for our team at a very opportune time.”

Neither team could score a third goal during the overtime period, leaving the game in a 2-2 draw. The tie left the Cardinals one game behind the eighth-place Continentals in the loss column. Wesleyan outshot Hamilton 30-23 and Dawson Sprigings ’17 saved 23 out of 25 shots, including 10 saves in the decisive third period for a .920 save percentage.

“I think we played well,” said Head Coach Chris Potter. “We were a little flat to start, but played better in the second half of the first and took that into the second period. We have to play desperate, but not without poise and execution. Sometimes, you play desperate, and it looks like chaos.”

The Cardinals did not fare as well against Amherst, losing 4-1, although the score didn’t entirely indicate Wesleyan’s level of play.

The game was held scoreless midway through the second period, when Captain Keith Buehler ’14 was assessed with a five-minute major penalty for elbowing, leaving the Cards shorthanded for an extended stretch. During that span, the Lord Jeffs broke through with two power-play goals, taking a 2-0 lead into the second intermission.

“Amherst has a good team, and good teams capitalize on mistakes that you make,” Potter said. “The five-minute major penalty was a definite turning point. They have a very good power play and they capitalized twice on it. I thought we played well after it, but we could not recover from it.”

Amherst added two more goals in the third period to take a commanding 4-0 lead. Wesleyan’s bright spot of the game came when Dylan Niehoff ’15 slapped a shot from the top of the left circle through a screen. Niehoff’s shot found a hole inside the right post with two minutes remaining, off assists from Casey Fratkin ’14 and Quincy Oujevolk ’17.

Wesleyan will try to climb up in standings on Saturday, Feb. 8 against Little Three rival Williams. The Ephs will provide a formidable challenge, as they are currently at the top of the NESCAC standings with only one conference loss. The Cardinals will follow up this matchup with a game against Middlebury, Sunday, Feb. 9. The Redbirds are looking for some revenge after the Panthers shut them out 5-0 last month.

“The key to finishing strong and making a late season playoff push is to simply have a good mindset,” Kline said. “We have all of the pieces to the puzzle for a championship run. We need to stay positive and keep working hard, and we will be rewarded.”