Professor Ellen Thomas Recognized by the Association for Women Geoscientists 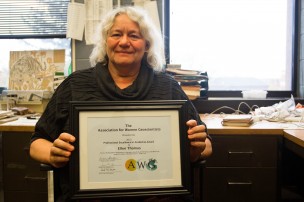 At its 125th annual meeting in Denver, CO, the Geological Society of America awarded Research Professor of Earth and Environmental Sciences Ellen Thomas its Professional Excellence Award. The conference took place from Oct. 27-30, bringing together geoscientists from various universities and research centers. The recognition came from the Association for Women Geoscientists (AWG), a group that aims to encourage women in the geoscience field.

Thomas explained the significance of the award.

“They define it as a distinguished contribution to the geoscience field, mainly a combination of research and teaching,” Thomas said. “I’m a fellow with various scientific communities, and last year I got a medal for research in geoscience.”

Chair of the Earth and Environmental Sciences Department Martha Gilmore lauded the AWG for its goal of encouraging women scientists.

“It’s the premier organization for women geoscientists,” Gilmore said. “From what I understand, this is a new award, so for their first career award they decided to give it to Ellen, which is wonderful. It’s another testament to her work, which is phenomenal.”

Noting that the geoscience field is somewhat obscure, Thomas explained the focus of her research so far.

Thomas described the implications of her work. She noted that by looking at the climate patterns and levels of ocean acidification of the past, one is able to gain insight into those of the future.

“We release more carbon dioxide in the atmosphere, and not only does this cause global warming, it also causes ocean acidification,” Thomas said. “The warming may change the circulation of the ocean and the productivity of the ocean, and it may also influence the level of oxygen, so obviously we are kind of worried [about] that in the future. Not only…overfishing and polluting the oceans, but also climate change, ocean acidification, and lack of oxygen may affect oceanic ecosystems.”

“The Award Committee was especially impressed with the breadth and depth of your professional accomplishments, your commitment to mentoring, and the emphasis you have placed on outreach and other service activities during your career,” Scheffer wrote. “Congratulations and thank you for being a positive role model to current and future generations of women geoscientists.”

“The award that Dr. Thomas has earned is highly prestigious and recognizes her many achievements in her outstanding career,” Chernoff wrote in an email to The Argus.

In regard to women in geoscience, Thomas noted that the stigma has shifted somewhat, and more women are increasingly becoming involved in the field.

“It has become much less [of] a male-dominated world than it was when I was a student,” Thomas said. “When I first applied [to a university] in Holland…I was just told they didn’t take any women…. There was no such thing as affirmative action…and for a large part of my time as a student the professors tried to get rid of me, tried to pester me away. [For example,] we were on a field trip in France, and there were only two women, and they left me behind in the field.”

However, Thomas feels that as a female professor, she can be somewhat more accessible to students.

“I think one of the reasons I was appreciated by my PhD students is that they felt that if [they] deal with a woman supervisor, then [she has] a bit more understanding for your issues,” Thomas said. “It’s easier to say that you have problems in your life. Studying geology is not the only thing you’re doing.”

Despite the work of the AWG and the recent increase in women geoscientists, Thomas still sees room for improvement.

Gilmore sees the award as beneficial not just for Thomas and the department, but for students as well.