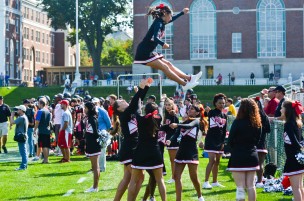 “Wesleyan won a football game. Wesleyan has cheerleaders. Something very strange has happened to my alma mater,” tweeted Justin LaSelva ’09 the Monday after the Homecoming game. Two days later, in response to a comment from an alumna, he tweeted, “Does this mean Keep Wes Weird failed?”

Maggie Feldman-Piltch ’14, the founder and a current captain of the Wesleyan Cardinal Cheerleaders, couldn’t help but take offense to the comments. After all, when she started the group in 2010, she envisioned it as an alternative form of the traditional cheerleading squad. The group cheers about current events and social justice issues like feminism, voter registration, and climate change.

“That really hurt me because…we’re all coming from some sort of weirdness whether we want to admit it or not,” Feldman-Piltch said. “I’m so much closer to joining the ranks of the alums than I am to being a freshman. I’m becoming more and more aware of that every day. To feel like my soon-to-be community has such disdain for something I worked so hard on hurts.”

Feldman-Piltch didn’t let the negative Twitter discourse bring her down, though. Instead, she cleared the air by sending out a series of informative tweets about the squad’s membership criteria (all Wesleyan students regardless of age, sex, gender, and level of experience) and practice schedule (four to five times a week with no coach or official meeting place).

The squad as a whole works hard to fight negative, stereotypical conceptions of cheerleaders. Feldman-Pitch stressed that despite cultural notions of cheerleaders as seeking attention, the Wesleyan Cardinal Cheerleaders cheer for the sake of personal empowerment. One of Feldman-Piltch’s main tenets when she founded the group was that it should possess an independent identity rather than serve as an accessory for the football team.

“No one is here to perpetuate misogyny,” she said. “We’re not trying to be ogled. This is not a music video. I’m way more India Arie than I will ever be Miley Cyrus.”

Captain Dawanna Butler ’15 said she also noticed dismissive attitudes toward the group on campus and believes it may be linked to students’ negative experiences with cheerleaders in high school. She hopes to enlighten her peers and to dislodge the myth of cheerleaders as snobby and unintelligent.

“It’s very contrary to their beliefs, but they come from these places where they have this concept of what a cheerleader is in their minds, and they can’t run away from what they think,” Butler said. “It’s hard for them to see us in the light that we want to show them that we live in.”

Some may see the very presence of a cheerleading group as counter to Wesleyan’s culture of nonconformity. But for Butler, it is the lack of acceptance of a particular group that is at odds with this culture.

Another major concern regarding the squad’s acceptance on campus is that many students still aren’t aware it exists. Since the still-developing group consists of only 10 members and is not recognized as a Wesleyan varsity sport, spreading the word can be difficult. The group works hard to make itself known by posting fliers on campus, maintaining active Facebook and Twitter pages, and publicizing events on Wesleying. Already, the squad has noticed an improvement in its reception.

“We’re getting more people to stay for the halftime show instead of going off immediately and getting food,” said Alison Santori ’16, the third captain. “It’s slowly becoming more positive, and people are saying they’re really enjoying our halftime shows, which is awesome.”

The Wesleyan Cardinal Cheerleaders may very well be on the way to gaining acceptance from their peers, but mainly they seek administrative acceptance. Last year, the squad was offered the opportunity to compete at National Cheerleaders Association’s National College Cheerleading Championship in Daytona Beach, Fla., but the squad could not accept the offer because the University had not recognized it as an official varsity sports team.

The captains, particularly Feldman-Piltch, remain in close contact with Director of Athletics and Head Football Coach Mike Whalen, urging him to help the squad become approved. The process usually takes several years, but, with Whalen’s support, the squad hopes to become authorized by the spring of next academic year, so  it can compete in the 2015 Nationals.

Aside from allowing the group to compete, its recognition as a varsity sport would provide it with many pragmatic benefits. For example, last fall the cheer team independently hired itself a coach because the University declined to provide them with one. In the end, the relationship was short-lived. The coach’s attendance record was shaky, and the team disputed with her regarding their payment agreement. Now, Feldman-Piltch serves as a stand-in coach, which takes up much of her time and energy. In general, the more experienced members (like Santori, who has been cheering since seventh grade), guide first-timers in stunts.

As a student group rather than a recognized sports team, the squad also must operate without an official practice space. When weather permits, the squad practices stunting on the grassy knoll between the soccer field and the turf football field by the Freeman Athletic Center. On cold or rainy days, the team sneaks into the field house. Luckily, Head Women’s Track Coach Walter Curry has been understanding, even allowing the squad to use the field house when the track is technically closed.

“I remember he said to me once last year, ‘I recognize hard work when I see it. Not a problem. You’re not in our way,’” Feldman-Piltch said. “Little bits of kindness like that mean so much to our team.”

More urgently, the group’s unofficial status means that its stunt practices present an insurance risk. The group routinely performs dangerous stunts like basket tosses and cradles, which involve throwing cheerleaders into the air and catching them. If a team member were to injure hirself during practice or a game, the school would not be able to cover the costs of medical care.

But most of all, the squad feels it deserves official recognition as a token of respect. While some sports teams have explicitly expressed a disinterest in having the group cheer at their games, the squad maintains a close relationship with the football and basketball teams, whose events the squad attends consistently.

“We practice just as much without the same infrastructure and support and recognition that other people get,” Feldman-Piltch said. “I have a lot of respect for student athletes, and I honestly consider myself one….You’re literally cheering everyone else on all the time, but to not have anyone there cheering you on, or to feel like that, is really hard.”

In relationships between cheerleaders, trust is particularly important because when they execute stunts they depend on one another to stay safe, let alone perform the show.

“I swear, we’re telepathic or something,” Butler said. “We just read each other’s minds, especially within stunt groups. We all love each other, and we’re all very close, but you can see us even closer on the stunt group level because the four of you are all trying to make this extravagant show. When you throw a girl up in the air, you’re essentially making a show. This girl’s life is in all three of your hands, and she knows that our lives are in her hands because if she comes down the wrong way, she can hurt us.”

Stakes will be lower during basketball season, when the cheerleaders will cheer but not stunt, as stunting on a basketball court can be dangerous. In the spring, they will still meet, but practices will happen less frequently and focus on conditioning rather than stunting.

Still, they don’t plan to scale back the fight to be recognized as a team anytime soon. If anything, the squad will channel its surplus energy into appealing to the University as well as publicizing itself and its goals to the student body.

“Until everyone on this campus knows that cheerleading exists and that we rock and that we are not your stereotypical cheerleaders, I will not be happy,” Feldman-Piltch said.

Clarification: Justin LaSelva ’09, whose tweets were quoted at the beginning of this article, was not contacted for comment regarding his remarks.