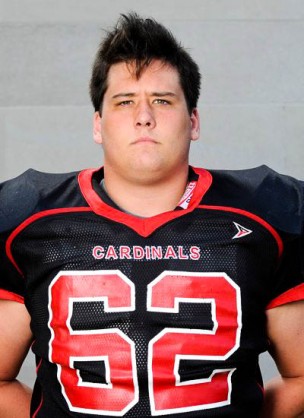 The NFL’s most potent running back, Adrian Peterson, recently bought all his offensive lineman snowmobiles to help him achieve the second most successful season of all time for a halfback. If snowmobiles did it for Peterson, what should juniors LaDarius Drew and Kyle Gibson buy for the Cardinal offensive linemen? Thanks to a group led by senior Captain Jake Sheffer, Wesleyan has run for a NESCAC-leading 1,575 yards and 15 touchdowns through seven games. In addition to stimulating the electrifying run game, the offensive line has also kept junior quarterback Jesse Warren on his feet; he has only been sacked four times during the season. Sheffer sat down with The Argus to discuss the victory over Williams and the implications of Saturday’s game against Trinity.

The Argus: Winning the first Little Three title in the last 40 years is something that the team will never forget. What do you think was the biggest factor in the victory over Williams?

Jake Sheffer: I’d say team chemistry. We have a really close unit, especially on the offensive line where I play. This whole team does a great job of communicating and they’re always positive. Since I’ve gotten here at the beginning of camp, I don’t think there have been any negative connotations to anything that we’ve done.

A: During Homecoming, the Wesleyan community raises its spirit toward the football team. This season, Wesleyan has drawn the biggest crowds to home games in the entire conference. How did playing behind such a raucous fan base help augment the team’s morale?

JS: It’s been great, especially that first week with the night game. The student body has continually shown us outstanding support, and it really makes me feel like the mentality on campus has changed. Once you have the campus behind you, as well as the administration, you feel that you’re representing a community.

A: As a senior captain, have you changed the way you prepare or act around your younger teammates?

JS: I think as a senior and a leader it is important to carry yourself with respect and make sure you respect your teammates. If you can’t respect others, there’s no way you have self-respect.

A: Trinity is not an easy place to play, as they are currently on a 50-game home winning streak. How does the team block that out of their minds when preparing for the Bantams?

JS: It’s important to keep it out of your memory and just remember that it’s only one game. It’s two teams meeting for one battle on one day, and that’s all it is….None of our history matters, and nothing that they have done in the past has any bearing on that day. You go into the game knowing that you are going to play a good team, but the team has to focus on playing the game.

A: Getting five guys to communicate together on each and every play is clearly difficult. How has the chemistry on the field improved between the linemen throughout the season?

JS: We’ve always had great chemistry since I’ve gotten here, but especially this year, we have a really close group of guys. Left tackle and sophomore Blake Cunningham communicates great on the left side. Also, junior Taylor Bishop has played a major role this year, getting into the lineup. He’s been real effective and tells me when I’m messing up. We need to watch film and study, so that we know what we’re doing before we do it. [Offensive line coach] Eric Ludwig has been a big help in aiding us in the film room and off the field, in order to make sure that we’re always in the right positions.

A: Trinity’s Nathan Cyr is currently fifth in the conference in sacks, with four on the season. How does the offensive line make sure that Warren is protected and has time to make the necessary throws?

JS:Communication and trusting your assignments, as well as discipline. Discipline is a key part of pass blocking. You need to know that you are going to have someone backing you up and that the running backs will pick up the rushers when you let them go.

A: Trinity’s defense is ranked fourth in conference and has forced the second-most turnovers in the league. How does the offense continue to stay aggressive, while focusing on not turning the ball over?

JS: Running the ball. I think that our running backs have run hard all year, as well as kept the ball. Being able to run the ball effectively and build our pass game off the run game goes a long way in keeping our turnover differential high.

A: With Drew leading the charge, Wesleyan has a multitude of running backs that can get the job done. How does the depth of the backfield play to your advantage?

JS: Teams have to look out for whom we are sending in. Whoever is in, we’ll have great wide receivers in the game, and then the running back will go unnoticed. LaDarius is our threat to bounce a big one to the outside, and Kyle is a hard-nosed back who will run downhill with authority. We have two underclassmen in John Vassar [’16] and Lou Stevens [’17], who are both great playmakers and have great potential. Our depth keeps defenses on their toes, guessing what to expect, and often confused.

A: This team is mostly led by upperclassmen, many of whom have played together for three or four years. Are there any nerves going into your final game as a Wesleyan Cardinal?

JS: I haven’t gotten that sense from anybody, but it’s definitely been surreal. Especially today, when it was the last practice with full pads, and I’m like “Wow, I’m almost done.” Every time I’ve done something this week, I’m like, “That’s my last time I have Monday practice,” or, “That’s my last time I’m having Thursday night ice cream with the lineman.” It’s going to be pretty cool, but it’s a little hard, and also weird to think about.

A: The 2013 team is on the verge of unparalleled success. Coach Mike Whalen and the current seniors both joined the team four years ago. What would it mean for the seniors to go out with an unblemished record and a championship for Whalen?

JS: It would mean the world, everything coming to fruition. It feels like everything has been a process throughout my four years here with Whalen. Coming in with Whalen, being part of his first class, that first year going 4-4 and seeing the leadership from the seniors, it was an inspiration. Then, after my second season going 3-5, it was a little bit of a disappointment. You could definitely sense it throughout the locker room. Junior year, we got a little bit more competitive, and finally this year, we broke through the dry spell. To see and be part of the process really means a lot to me.