Behind Macdonough Elementary School in Middletown, a garden grows: leafy greens, bell peppers, tatsoi, sunflowers, and strawberries fill the space. Of course, this garden didn’t spring up from nowhere; it resulted from a collaboration among the University’s Middletown Urban GARDENS (MUG) group, the North End Action Team (NEAT), and the elementary school’s students and teachers.

“We built a community garden behind Macdonough, took the children out there, got them involved in actually planting, watering, and tending to growing plants there, taught them a little about the lifecycle of plants, and exposed them to healthy food,” said James Carter ’14.

By establishing community gardens at local elementary schools and in the north end of Middletown, MUG aims to promote nutritional education and foster a sense of community through the use of shared, sustainable space.

After finishing a stint with AmeriCorps, Adin Vaewsorn ’15 wanted to focus his knowledge about community engagement into an effort to improve local relations between the University and the wider community. To this end, he and a few others decided on the goals of GARDENS, which stands for “Generating Agricultural Resources and Delivering Education on Nutrition in Schools.” 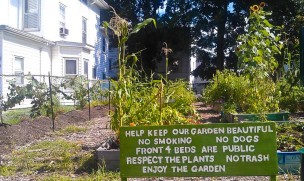 The idea of garden-based nutrition education, Vaewsorn said, fulfilled more than just one of his goals as a University student.

“[It] was a thing I found I had a passion for, and I thought it would help establish relations between Wesleyan and Middletown,” he said. “It was a win-win in my mind.”

In 2011, Vaewsorn spotted an empty lot on Ferry Street that was owned by a housing corporation but not in use at the time. NEAT, a grassroots community organization that had already built a successful community garden on Erin Street, had also been eyeing the lot as the location for a new public space.

“It wasn’t the prettiest thing to look at, but it looked like a place that had so much potential,” Vaewsorn said.

According to Pierre Gerard ’15, the garden also satisfied a need for connection within the incongruent Ferry Street area. Large apartments and the Wharfside Commons development, which consists of high-density residences with large turnover rates, surrounds the garden.

“[We wanted to] create a space that people who are constantly coming and going can hold onto while they’re there,” Gerard said.

NEAT acquired the property, and MUG provided the muscle to make some changes. According to Janika Oza ’15, the group cleaned up the trash, moved the rocks, used a brush mower to clear the five-foot-high weeds, and replaced the lead-laden soil with a healthy mulch of manure, woodchips, and cardboard.

As for what to do with the space, MUG asked the community, believing that those who benefit most from shared spaces should have the final say in their use. Members of the group went door-to-door asking if households were interested in owning sections of the garden, and, if so, what they wanted to grow.

“It was the kids who made the decisions,” Vaewsorn said. “They were very excited about their vegetables.”

MUG then supplied the plants, receiving donations of discounted or free seeds from local stores. The resulting area is a mix of individually owned and managed plots, all of which are currently occupied, and a common area of four beds open to public consumption, which Middletown gardeners volunteer to maintain.

The support of NEAT, which has a strong relationship with Middletown, proved instrumental to the involvement of North End residents in the project.

“With an emphasis upon democratic neighborhood leadership and community coalition building on an issue-by-issue basis, NEAT has developed successful programs and initiatives aimed at responsible revitalization and has become a grassroots community organization dedicated to the development of indigenous participation and leadership within the North End neighborhood,” wrote NEAT Executive director Bobbye Peterson in an email to the Argus.

The team was formed in 1997 in response to the area’s broad disinvestment, neighborhood violence, and widespread poverty, Peterson noted. NEAT makes its greatest impact in providing affordable housing redevelopments, and its experience with promoting public spaces made the garden project more doable.

“[NEAT is] the pillar of support in the community that makes this possible,” Vaewsorn said.

To further the impact of its nutritional efforts, however, the group makes sure to engage the children of local families in the gardening process. Carter said the elementary school program, which will move from Macdonough to Wilbert Snow Elementary School this semester, provides a necessary resource to students of low socioeconomic status. At Macdonough especially, a large fraction of students receive free or reduced lunches, so the garden supplements their nutritional education.

“The quality of the food they’re experiencing at school and at home is fairly low,” Carter said. “A lot of the children don’t have exposure to vegetables in many forms, so we’ve actually harvested food from the garden there that they’ve planted and showed them how to cook it.  We had a little stir fry.”

Carter has been working with the administration at Snow to set up a curriculum, with lessons about nutrition labels and the values of different processed foods complementing the garden-based activities. At Macdonough, Carter found, the children responded best to hands-on approaches to learning, and the garden fueled their excitement for learning about and caring for plants.

“They really like to get out there and run around through the garden,” Carter said. “For whatever reason, watering became the highlight activity for them; watering and eating, mostly.”

Members of MUG said they were inspired by how engaged community members became in their newly created space.

“I was most impressed by how much the gardeners cared about the garden individually,” Gerard said.

The volunteer gardeners acted as community leaders, and once the project got off the ground in May, MUG realized it no longer had to intervene in the day-to-day necessities of watering and caring for the plants and common area.

“Our Ferry Street gardeners have more or less taken over the garden,” Carter said. “They’re responsible for running things, and they just let us know if something is not working out well, and we’ll help them with that.”

Especially over the summer, Middletown residents provide the bulk of the garden’s continuing operations.

“[MUG] opened up the space for them to organize themselves,” Vaewsorn said.

The gradual move away from student management further secures the future of the Ferry Street garden and provides encouragement for both MUG and NEAT to search for more abandoned or blighted lots to convert.

“Wesleyan students often do not live in Middletown for the entire year and often leave after they graduate, so it is crucial that the Middletown residents involved have a major stake in the project so that it can be sustainable,” wrote Keren Reichler ’16 in an email to the Argus.

The elementary school programs prove a greater challenge in terms of sustainability. While the Macdonough garden continues to thrive, without the involvement of University students, the educational aspects require outside help.

“The teachers aren’t paid to do these programs, so we have to show up there and provide the manpower,” Carter said.

Now that its roots are planted, MUG plans to branch out. Oza said the group looks to expand its infrastructure by building a small stage or fire pit in the Ferry Street lot. Members also plan to hold more events for the community, including a pickling workshop with the garden’s green tomatoes and a flower-bulb-planting day.

And, of course, MUG strives to pinpoint what the community wants for its garden. So far, the response has been overwhelmingly positive.

“Everybody loves the idea of something that could bring people in a seemingly disparate area together,” Gerard said.