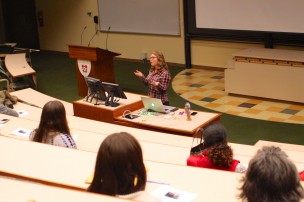 Laci Green, a sex-positive YouTube sensation, spoke to a crowd of about 50 people on Friday, Sept. 27 in the Tischler Lecture Hall. Green hosts the weekly YouTube show Sex+, on which she discusses sexuality, relationships, and gender, among other topics.

Green’s talk was titled “Relationsh!t” and focused on relationships and sexuality on college campuses, a relevant topic for her audience, which was made up primarily of University students. Her lecture began with an overview of common college relationships, disputing the idea that there is only one model that relationships should resemble.

Green pointed out that two of the most common relationships on college campuses are hookups and no romantic or sexual relationship at all.

Extrapolating on the merits of being single, Green brought up her personal experiences with relationships. She stressed the importance of being alone and being able to support oneself.

After stressing the importance of independence and self-sufficiency, Green went on to discuss the realities of campus hookups. She examined the misconception that the majority of college students engage in hooking up on a regular basis.

“It’s usually exclusively sexual [and] you’re not getting emotionally involved, except for when you do get emotionally involved,” Green said. “That can be really awkward. But a lot of folks don’t hook up…when you look at the statistics it’s clear that not everyone’s hooking up. It’s actually about half of college students who really have this sort of relationship. So if you don’t want to hook up, don’t hook up. And if you want to hook up, hook up.”

After her lecture, Green stayed to talk to members of the audience individually, and some attendees waited almost an hour to speak with her.

“In general, where I’m invited people are already relatively progressive, which I think is something that I want to work on because I want to be in communities where they’re not necessarily having these types of conversations already,” Green said after the lecture. “But it’s also great to be augmenting conversations that are already happening.”

In her talk at Wesleyan, Green discussed the origins of Sex+, and explained that the inspiration for the show came from her childhood.

“I was brought up Mormon, so I lived in a household where sex was very shamed and stigmatized and taboo, and there was a lot of fear around it for me,” Green said. “There’s some tension, but I think as the years go on, and [my family is] getting used to what I do, they’re sort of becoming more sex-positive themselves, so that makes me really happy.”

One attendee, Alyssa Glanzer ’16, came away from the talk feeling more informed about the realities of relationships in college.

“I really enjoyed Laci’s talk,” Glanzer said. “I thought it was sort of relevant to issues college kids go through with relationships and everything. I think it was awesome that she came here.”

As attendees walked into the lecture, they picked up a pamphlet by the door titled “Revolutionary Self Care: Building Healthy and Diverse Relationship Skills.” The pamphlet, provided by the event organizers, outlines a “Relationship Bill of Rights,” as well as guidelines for “resolving a conflict gracefully” and “asking for what you want.” The booklet is interactive and asks the reader to fill in their own “Relationship Bill of Rights” and mark off a “Self-Care Assessment.” It also contains a detailed list of resources for students.

The event was publicized as the start of Lesbian, Gay, Bisexual, Transsexual (LGBT) Pride Month; however, the money used to fund the event did not come from the Pride Month budget. Rather, the lecture was funded by the Peer Health Advocates, Adolescent and Sexual Health Awareness, the Sexual Assault Response Team, and the QRC in conjunction with QueerWes.

“The event was like ‘kick off Pride Month,’ but it technically wasn’t an official Pride Month event because Pride Month doesn’t start until tomorrow,” Rimm said. “So we had to get a lot of different clubs help us get the money because otherwise we wouldn’t have a Pride Month budget because it would all go to Laci.”

Rimm deemed the event a success and said that she is already in talks with other students to bring Green back to campus.

“I had a lot of people come up to me afterwards and be like ‘that was such a great talk; that was so interesting,’” Rimm said. “[That] was really cool because I was super nervous that no one was going to come….There were high schoolers there, and people who don’t go to Wesleyan came, so that was really cool.”