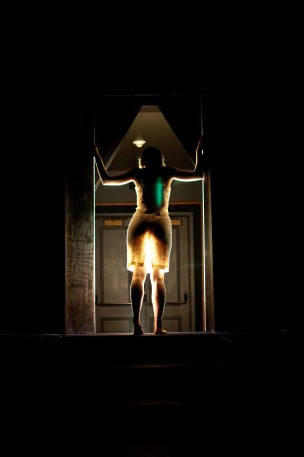 They’re a cute couple, to be sure. But you can’t help but feel that somehow, despite their obvious love for each other, they’re just not going to work out.

This sense of timeless tragedy pervades “Eurydice,” Sarah Ruhl’s masterful retelling of the classic myth, which opened in the ’92 Theater on Wednesday. If you don’t have plans tonight, I suggest you make your way to the box office; this event, skillfully staged by Sivan Battat ’15 and Gabe Gordon ’15, is an excellent night of theater. Performed by a five-star cast and with incredibly ambitious design, the strengths of “Eurydice” largely make up for its occasional weaknesses.

The standout performance is Eva Ravenal ’15, a newcomer last semester who quickly proved her chops in “Neighborhood Three” (also co-directed by Gordon). Ravenal has a natural magnetism that serves her well in this play as the eponymous bride to Orpheus (Matt Hixon ’15), who is the greatest musician the world has ever seen but a bit of a dope. It is clear from the get-go that Eurydice is the brain of the pair, even if Orpheus is its engine; Ravenal plays her with a wide-eyed, child-like engagement with the world around her. It was great to see the actress tackle a more vulnerable role, since Ravenal has distinguished herself so far mostly as characters who are volatile, acerbic, and aggressive.

For his part, Hixon supplies a solid and sincere Orpheus who struggles—though not very hard—against his own tendency to turn everything into music. Eurydice is a woman of words, but Orpheus isn’t able to meet her even halfway on that front. He means well, but as Eurydice points out, every time she asks him what he’s thinking about, the answer is, “Music.” Hixon’s earnest, boyish Orpheus was fun to watch, even in his most tragic moments, and his devotion to his wife is touching even when it seems misguided.

The deepest relationship in the play, though, is that between Eurydice and her father, who is already dead and waiting for her in the Underworld. When Eurydice arrives (sans memory) in the Underworld, her father takes her under his wing again, provides for her, makes her happy, and ultimately plants in her the seeds of her tragedy and his own: her desire to return to the living. Locke Alexander ’14 plays the father, an unassuming and quiet man, forceful only when it comes to protecting Eurydice. His performance is tender and straightforward, and his clear and poignant desire to rebuild the life he shared with Eurydice is naturally enthralling.

So much for the living. The characters who are wholly of the Underworld are an entirely different breed. Their leader is The Nasty Interesting Man/Lord of the Underworld, played by the increasingly diverse Christian Schneider ’14. The Man is a cozener and a cheat; he is Death in disguise—and Death wants Eurydice for himself. In the Underworld, though, he transforms into a juvenile boy who “grows downwards,” violent and ill-tempered. He’s backed by a chorus of stones played by Kate Malczewski ’15, Noah Masur ’15, and Elijah Stevens ’15. The stones are the only characters in the play that have any real color; their vibrant costumes (and the washed-out, worldly ones) are beautifully designed by Penina Kessler ’15. Like their master, the stones are portrayed as violent, tantrum-prone toddlers, only occasionally snapping into choral unity as grave reminders of the presence of Death.

In these characters, though, the seams of “Eurydice” begin to fray slightly. To begin with, it’s redundant to refer to one of the stones as “Loud Stone” (the others being “Big” and “Little”). All of these stones are loud; they shout and stomp about the stage and generally display a great deal of histrionic violence. As Lord of the Underworld, Schneider’s performance is similarly extreme. It’s not that there is no place for caricature; but caricature is an art, and unremitting, relentless caricature can quickly become exhausting. Also, for characters who keep reiterating that laughing, crying, and anger have no place in the Underworld, the stones seem awfully committed to doing those very things.

Moments of similar heavy-handedness pervade the design. The lights by Rachel Leicher ’15 are her usual lush and gorgeous array, and the sound design by Ben Zucker ’15 is haunting, beautiful, and occasionally chilling in just the right way. But every once in a while there are moments that feel wrong with the actors’ simple delivery—the “reveal” that the father is dead, early in the play, struck me as gratuitous. The set, designed by Gordon, has fantastical moments (the raining elevator and flowing river are particularly noteworthy), but is rather static for a play that includes such transcendent, mystical moments as riding a musical note through the earth.

Ultimately, though, the work that has been done on “Eurydice” is of the highest quality and is particularly admirable coming from so collectively young an ensemble (this is Battat’s first fully-staged directing project and only Gordon’s second). These criticisms are perhaps a reflection only of the distance between this performance and the incredible work that is Ruhl’s text. But despite the distance, we get at least a sense in this show—particularly its final moments—of the majesty, the sadness, and the tragedy that are the heart of the story of “Eurydice.”