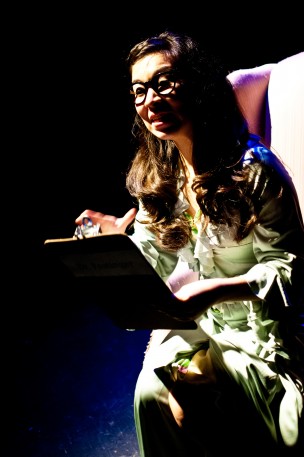 The lights rose on the intimate performance space that had been set up on the stage of the ’92 Theater, revealing Emily Hunt ’13 lounging at the foot of her bed, a handle of whiskey in one hand. With a seductive smile, she launched into one of Blanche DuBois’ famous monologues from one of the most renowned plays in American theater, Tennessee Williams’ “A Streetcar Named Desire.” Suddenly, a cell phone rang, the tinny iPhone marimba theme echoing in the small space. Hunt froze. A panicked audience member scrabbled around his pocket for a second. Then Hunt, looking embarrassed, moved to the bed and dug through the bedclothes.

The cell phone, after all, was hers.

Thus jarringly (and intentionally) began Hunt’s senior thesis performance, “The Kindness of Strangers.” The premise is simple: Hunt, playing the role of an actress, has just been rejected from the role of Blanche in an off-off-Broadway production, and freshly wounded asks the audience for help improving and examining her performance in the part. What emerged from the interactive evening of theater was a heady, engaging examination of the difficulties of performing a role that one has not lived, incorporating psychological theory (Hunt is a double-major in theater and psychology) as well as Brecht’s and Stanislavski’s theories about the role of the actor.

However, this was hardly a performance geared toward the theatrically elite (or even necessarily the theatrically literate)—and this orientation was entirely to the show’s advantage. Witty, passionate, and haunting by turns, Hunt’s performance interwove her own narrative with Williams text beautifully, seamlessly connecting her own life with the different (but no less resonant) experiences of Blanche.

“I think I actually liked it better because I don’t know ‘Streetcar,’” said Andrea Ruiz-Lopez ’13. “Once the phone rang in the beginning, you could never be sure what was her and what was part of the show.”

Hunt’s talent as an actress—she has been a virtuosic mainstay of both Second Stage and the theater department during her time at Wesleyan—was on full display. The performance included hilarious moments of interactivity (on Brecht’s description of how an actor must “show” the audience the character’s inner state: “Can anyone show me what fear looks like? Yes! That’s great! Hold that!”), punch-drunk caricature (a few choice words were delivered by a psychologist, who had a thick accent and thicker glasses analyzing Blanche), and stark personal monologues. Perhaps the most striking moment of the show was Hunt’s quaking personal story about her time spent working in a neo-natal ICU in Boston, the closest she has come to having another human being die in front of her.

In addition to its emotional subject matter, this original work also managed to provoke reflection—clearly Hunt’s goal, if her program note is any barometer. From the first moment of the phone’s ring, a constant series of self-references and disruptions kept the audience on its toes and paying attention to the import and meaning of Hunt’s performance, not just its visceral punch. (One joke early in the show ran somewhere along the lines of, “I wonder what Stanislavski would say about this? Hm. Let me look at this conveniently located copy of ‘An Actor Prepares!’”) At a tight 40 minutes, the solo performance distinctly left audiences wanting more, never becoming pedantic or preachy, as is often the plague of her chosen art form.

Whatever Hunt’s future holds, “The Kindness of Strangers” was an indisputably excellent capstone project for her work in Wesleyan theater: touching, funny, and thought provoking.