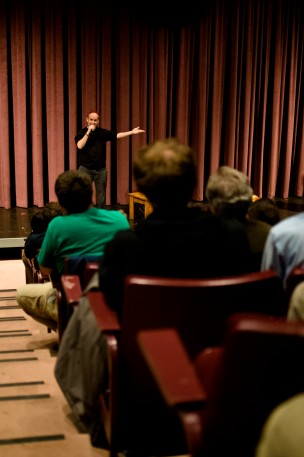 Ian MacKaye is a weird guy. He said so himself multiple times at his WESU-sponsored question-and-answer session in the CFA Hall this Wednesday night. “Let’s do something weird,” seems to be his motto for most of his endeavors in life, and it’s worked rather well for him.

MacKaye was a pioneer in the hardcore punk scene as the front man of Fugazi and Minor Threat. He also owns his own independent record label, Dischord Records, and now plays in a duo with Amy Farina known as The Evens. They recently released a new album this past November, called The Odds.

“[Recording] challenges the moment that we are here, together,” explained Mackaye after requesting that the audience not record the event on video. He spoke about his perspective on documentation, admitting that he was perplexed by the fact that someone wanted to liveblog the event.

“Let’s just make this a private thing for us for two hours and not have to have the rest of the world chiming in,” MacKaye said.

MacKaye has been on the Wesleyan campus before for a similar question-and-answer event in the World Music Hall, and also with Fugazi to play a show at Eclectic House back in the late 80s.

“How could you forget the Eclectic House?” he reminisced.

He remembers being slightly discouraged by the fact that Wesleyan students treated the show as more of a party than a concert. His recollection of seeing students drinking in the back room rather than engaging with his music would make any listener reflect on concert etiquette and consider the performer’s point of view.

The conversation flowed seamlessly for two hours from MacKaye’s opinions on documentation to his memories of Wesleyan, his principles as an artist, his views on violence in the punk rock scene, and his memories of Ted Nugent concerts. With over three decades of experience in the music business, MacKaye had a great deal of wisdom to share about concert experiences and what it takes to stay true to your art.

As MacKaye shared his stories about violent crowds at Fugazi concerts, which included a particularly striking account of one woman losing the ability to use her legs after an injury in a mosh, MacKaye was asked about his ideal audience.

“My ideal is to play to a room where everyone is singing along,” MacKaye responded.

He then went on to reemphasize the importance of absorbing a moment and the magical  connection that can exist between the performer and the audience. MacKaye is also fascinated by the fluency music can create, such as a room full of hundreds of people all singing the same words. He had us attempt to create one such “weird” moment by asking the entire room to ring their cell phones at the same time.

MacKaye also shared his motivation to go vegan, a decision about which he was slightly hesitant to speak as he believes it to be a personal choice. However, the discussion of food did produce a priceless piece of Mackaye’s wisdom:

The audience couldn’t have agreed more.

MacKaye’s inspirational approach to life entails embracing a sense of freedom that is presented in the punk rock culture he helped to cultivate.

“Here’s my point about punk rock,” he said toward the end of the evening: “Because we said so.”

While Mackaye didn’t give specific advice on how to succeed in the music industry, his reminder to prioritize and maintain your sense of self above all else was much more valuable.

If you missed getting to talk to one of the greats of independent artistry, WESU will be broadcasting a recording of the evening. However, I think Mr. MacKaye would urge you to engage in a conversation about the event with other students instead, because being in the moment is what it’s all about.