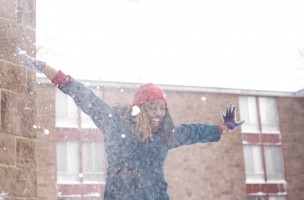 Winter storm “Nemo” brought a deluge of snow to the Northeast on Friday, Feb. 8 and into the morning of Saturday, Feb. 9. President Barack Obama declared a state of emergency in Connecticut, an action that provides the state with federal funds and allows Federal Emergency Management Agency (FEMA) to supply resources to the state.

Almost 36 inches of snow blanketed the ground in the Middletown area. Municipal and campus workers are continuing to clear the snow from roads and pathways. In addition, Nemo claimed the lives of seven people across the state, according to the Middletown Press, including one person in Meriden.

Plumbing Shop Foreperson Dean Canalia, who has lived in Connecticut for 43 years and has worked for Physical Plant for 12 years, agreed that this blizzard has been especially devastating.

Although the campus retained power during and after the storm, the University was closed on Monday, Feb. 11, due to snow removal and a lack of parking. Classes resumed on Tuesday, Feb. 12, but a campus announcement advised non-essential administrative staff members not to report to work. Middletown public schools were closed on Feb. 11 and 12, and it is unclear when they will re-open, Superintendent Patricia Charles told the Middletown Press.

“[Class cancellation is] based on parking, accessibility of buildings, road accessibility; it’s based on a variety of things,” Meyer said.

Meyer also noted that all on-street parking was banned in Middletown, which resulted in a temporary loss of 600 parking spaces at the University.

Physical Plant and the Middletown Public Works Department have been working to move the vast amounts of excess snow that accumulate once the snow is plowed from streets and parking lots. According to the Middletown Press, excess snow collected by Middletown Public Works is being dumped in Veterans Memorial Park. No snow will be dumped in the Connecticut River unless the Connecticut Department of Energy and Environmental Protection approves the action.

According to the Hartford Courant, a portion of Interstate 91 from Windsor to the Massachusetts state border was closed on the morning of Feb. 11 due to freezing rain. Sixteen roofs in Connecticut have also collapsed because of the rain.

“And now with the rain, we’ve got to watch the roof loads [on campus],” Meyer said.

A few aspects of this particular snowstorm have made the cleanup more difficult than usual, including the rapid rate of snowfall, the weight of the snow, and the added weight from the freezing rain on Monday morning. According to Canalia, the snow is extremely difficult to move.

Many University workers were unable to get to the campus over the weekend. Bon Appetit Resident District Manager Michael Strumpf said that only six staff members and three managers, including Strumpf, were able to work at Usdan’s brunch on Saturday, Feb. 9.

“I’m sympathetic; I understand,” Strumpf said. “We are essential personnel on this campus, and I had firsthand problems trying to get here myself on Saturday and Sunday. I totally understand, a lot of my management staff couldn’t even make it in either.”

Strumpf also noted that on Friday, Feb. 8, Weshop was busy in preparation for the storm.

“Weshop was closed [on Saturday], but Weshop was very busy Friday night when the snow started prior to the big snow,” he said. “So any perishables that were there—produce, proteins—pretty much sold out.”

Weshop, Pi Café, and Usdan Café were closed for the storm until they re-opened on Sunday. Usdan remained open throughout the weekend, and Summerfields opened for dinner on Monday, Feb. 11. According to Strumpf, there were no food shortages due to the storm.

“We over-ordered for Friday, knowing that the storm was coming and that there wouldn’t be any deliveries Saturday and Sunday, which we typically do have,” he said. “First thing [Monday] morning we had deliveries coming in so we had no shortages of food, by no means.”

Orelia Jonathan ’15, who recently broke her foot and now wears a medical boot, noted that transportation around campus has been difficult.

“It’s been horrible,” she said. “On the night that it was snowing, I couldn’t even wear my boot out because it was just so wet. So I just wore my hiking boots, and that was really bad because it just gets soaked, and there aren’t really clear paths so my toes [got] really cold.”

Jonathan also said that, although the pathways are still difficult to maneuver, she believes that Physical Plant is performing well, considering the circumstances.

“I think [Physical Plant has] done a good job, but [campus is] not handicap accessible,” she said. “I don’t even consider myself that handicapped, like I can walk around, but people with crutches or anything else would honestly be screwed. People should appreciate what [Physical Plant has] done because they’ve been working so hard, and obviously it’s really hard to clear everything, but it’s been a pain in my ass walking around.”

According to Interim Associate Dean for Academic Resources Scott Backer, the University has tried to accommodate students with mobility difficulties despite the weather.

“There is a van service to aid students with transportation to and from their residences to the health center, class, or the dining facilities, and Public Safety is always prepared to help students with transportation if the need arises,” Backer wrote in an email to The Argus. “Physical Plant also works very hard to be attentive to‪ student residential areas‪ where there are particular needs.”

Some students viewed the storm as an opportunity for adventure. Yatta Zoker ’14 walked across campus during the height of the storm on Friday night.

“[The storm] brightened my mood [Friday],” Zoker said. “I got to adventure [from Womanist House] to Buddhist House (BuHo). That trek was hilarious. I fell, but I fell with a friend, so that was fun.”

William Tyner ’13 had his Friday night plans affected by the intensity of the blizzard.

“I was throwing a party,” Tyner said. “It changed the game for my party. Very few people came out. It showed me who my real friends were.”

Khari Slaughter ’13 attempted to drive to a party at around 12 a.m. on Saturday.

“I spent a lot of time trying to navigate the streets in my car,” Slaughter said. “It was a bad idea. I was trying to get to BuHo, and I thought driving may be more efficient than walking, but then I found out, wait a minute, all of the driveways are completely covered. Some of the streets don’t even exist anymore.”

Chris Delacruz, a student at Middlebury College, arrived at the University on Friday to visit a friend and had originally planned to return to Middlebury on Saturday.

“I feel as though I’m trapped,” Delacruz said. “I’d like to think it’s destiny. Something glorious is going to happen tonight [Saturday night]. [Or] maybe there’s absolutely nothing here for me, and I’m stuck to do homework.”

For Jessica Gorak ’15, the snow allowed for a much-welcomed break from the demands of student life.

“I think it was good, especially for Wesleyan students,” she said. “They’re so stressed. People feel like they need to be really productive, so this kind of put that to a halt for a little bit.”

For many students, the storm interfered with previously scheduled plans, as event after event was cancelled or postponed.

“The concert I wanted to go to got cancelled,” Nkosi Archibald ’16 said. “That was a little upsetting, but it’s okay because I got to watch Adventure Time.”

The blizzard forced Kwietniewska to dramatically alter her plans for the weekend.

“I was supposed to go to a meditation retreat, and I didn’t get to go because I didn’t have a ride, so that was a bummer,” she said. “Then I changed my mindset around a little, and said, “All right, I’ll go to Gallim because I really wanted to see it, and then it was cancelled too.”

The Gallim dance show, scheduled to take place in the Center for the Arts (CFA) on Friday and Saturday nights, was highly anticipated by many members of the University community and an important event on the CFA calendar.

“We raise funds from the National Endowment for the Arts, the Office of the Arts of the State of Connecticut, lots of partners [who] make it possible for us to bring dance to Middletown,” CFA Director Pam Tatge said. “That is why it is significant, that and the way we work to integrate our campus into whatever the company is going to present. In this case, we have a partnership with Jewish Studies and the Jewish Chaplin that participated in working to contextualize Gallim’s performance.”

Gallim was planned to be one of the three major dance companies that visit the CFA every year. According to Tatge, around 600 patrons from across the state were expected to attend between the two nights, including students from Choate Academy and Connecticut College.

“We’ve never had to cancel the entire run [of a visit from a major dance company], namely two performances of a dance,” Tatge said. “In fact, we’ve never cancelled even one, so it was huge to have all of the excitement on the part of students, faculty, and community members, and just not be able to do it.

Tatge explained that it is unclear whether the dance company will be able to come to campus at a later date.

Despite the high number of cancellations of events on campus, some students were excited by the storm. Marco Martinez ’15 was one of many students who took advantage of the accumulated snow to go sledding on Foss Hill on Saturday afternoon.

“I’m from the Philippines, and this is a ridiculous amount of snow,” Martinez said. “I can’t describe this to my relatives back home. To [them], it’s like we got flooded, only the flood is solid.”

Physical Plant workers began removing snow on Friday and have continued throughout the week in efforts to make streets, paths, and parking lots safe for cars and pedestrians.