Movie’s Got 43 Problems and an Incest Joke is One 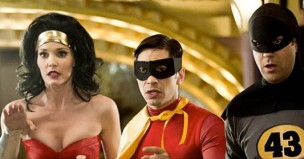 There are many types of bad movies. There are those that carry a sort of ironic glee—so bad that they’re good, as the platitude goes. Then there are those bland fiascoes, which fade into memory within hours of release (usually starring Gerard Butler fighting or fucking someone).

But every once and a while a film comes along that is so truly horrible, so abhorrent, ugly, and repugnant that it reminds us as filmgoers of the true depth of cinema’s potential. While we scrape the sea-floor, recoiling at the flamboyance of “The Room” or the flavorless artlessness of “A Thousand Words,” these heaps of trash gesture toward the Mariana Trench of cinematic despair. It is a place where all of the worst qualities that one might find in a film fester together to form a string of shots and scenes so vile and terrible that its discovery holds a certain incredulous revulsion.

It is with this strange mix of awe and despair that we turn to “Movie 43,” a collection of comedic shorts, basted in humorless grotesquerie and offense, orchestrated and unleashed upon the filmgoing public this month.

The film, which has sold itself on its massive cast of well-renowned stars, such as Halle Berry and Hugh Jackman, begins simply. Dennis Quaid is a desperate Hollywood has-been and enters the office of Greg Kinnear, a bigwig producer. He offers a host of genius ideas that he promises will make Kinnear’s studio a fortune. These ideas, as introduced by Quaid, form the basis of the sketches that clog the movie’s overlong run time (yes, the film is less than an hour and 45 minutes, but for this sort of junk, even that is too long).

These skits, all firmly mired in one-off jokes that a fifteen-year-old might find immature, range from simply stupid to downright horrid in their tactlessness.

In one, Kate Winslet and Hugh Jackman go on a blind date, but it turns out Jackman has testicles dangling from his neck (which end up sprinkling pubic hair into the appetizers and resting plaintively on an unsuspecting infant’s head). Anna Faris, who had seemingly almost recovered from her participation in the “Scary Movie” franchise, entreats her boyfriend, Chris Pratt (so charming in “Parks and Recreation”), to defecate on her. Spoiler alert: he accidentally does so on the windshield of a car.

In one particularly disgusting segment, a home-schooled high schooler is tormented by his parents, who are intent on having him experience the social strain of actual high school. Certain bits here almost work, including the father mocking his son’s genitals in the shower, or his mother locking him out of the house as the family hosts a party that their son is not invited to. But this is all thrown away the moment mommy dearest decides to have her son experience a proverbial awkward first kiss. Isn’t incest fun?

This and much more (some segments mildly better, some even worse) await anyone foolish enough to attend a screening of “Movie 43.”

Now, I’m all for crude and subversive humor. I don’t mind a little filth. But there’s absolutely no humor in “Movie 43,” just a desperate and lazy adherence to the doctrine of shock value that should insult audiences both in content and intent. The film wallows in an obsession with the lowest common denominator of humor, consistently mistaking crudity for jokes and howling filthy absurdity for incendiary charm.

The abundance of talent on display on makes it all so much worse. The presence of big-name actors only serves to give the film a distasteful aura of nepotism, making it all seem like one large middle finger to those nameless writers and comedians, actors and directors who slave unrecognized with truly great ideas, while all those who have already succeeded indulge in lazy outbursts of sexism, racism, and vagina jokes (whose punchline I might add, is as complex as “LOOK! A vagina!”).

To see people like Kate Winslet and Elizabeth Banks abase themselves in service of such a spectacle of unseemliness might almost make you question their overall skill, at least in choosing their projects. We can only hope that this movie is the result of some sort of blackmail or that Hugh Jackman had a gun to the back of his head while he wagged his chin-balls in that crowded restaurant.

Don’t see “Movie 43,” not even for some sick ironic thrill of watching Hollywood’s blind self-indulgence implode upon itself. There are so many better forms of abasement that you could spend your 10 dollars on, all of which would have a more positive effect than sitting in a theater and reminding filmmakers that this trash, despite its emptiness and ugliness, can sell.

And we all have better things to do than waste time trying to wash the taste of this horrid mass out of our mouths.