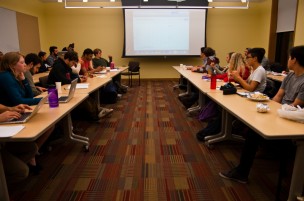 The Wesleyan Student Assembly (WSA) held an open forum meeting on Oct. 28 to discuss the influx of incidents between University students and non-University students over Homecoming Weekend. They addressed the campus reaction to the assaults and their plans to prevent further events like these from occurring.

“The WSA has been meeting with Public Safety and soliciting input from the students about safety both on and offcampus,” said WSA Chair of the Student Affairs Committee Nicole Updegrove ’14. “We will also be conducting a lighting tour of the campus to find areas that could be better lit.”

Four of these incidents were reported in Public Safety (PSafe) email alerts to students. According to the alerts, some of these instances included threatening behavior exhibited by non-students. PSafe has begun taking steps to avert such events in the future.

“Public Safety increased patrols on weekend nights and hired Middletown Police to supplement their own forces,” Updegrove said. “They continue searching for the assailants, one of whom has already been identified.”

The WSA meeting was organized in part to address the reactions to the PSafe alerts from the University community.

“Certain anonymous comments online have had a deplorable impact on this campus,” Updegrove said. “After reading several incident reports that identified assailants of the same race, numerous black students expressed being affected personally, particularly in anticipating negative reactions from the rest of the community.”

Many of these anonymous comments were made on the online Anonymous Confession Board (ACB) and concerned the race of the assailants.

“The comments on the WesACB seem to have shifted some of the focus in campus discussion from Middletown relations to issues of diversity and inclusion,” said WSA Chair of the Community Outreach Committee (COCo) Syed Ali ’13. “In addition to a general fear of physical attack that the Public Safety alerts caused, the WesACB post caused many students of color to also feel unsafe and excluded from the Wesleyan community.”

In the meeting, students questioned whether the ACB comments were an accurate depiction of students’ opinions on race. WSA members expressed their concern with the comments, and some members claimed that they were exacerbated by the fear caused by the events.

“Obviously these remarks are not representative of the views of this campus, but they are a very present reminder of a campus-wide tendency to draw lines between ourselves and others—lines that, in the shadows cast by fear, seem too wide to cross,” Updegrove said.

Ali said that the WSA has also heard reports of other incidents of discrimination.

“Although we do not receive email blasts for these, we should be conscious of the events that happen on this campus that involve student-to-student interactions,” Ali said. “[For example,] this past Friday night, a student was refused entry into a party because of sexual identification. Since then, members of the WSA have been working to create dialogue around the incident that will productively establish that our community will not accept such discrimination.”

Another issue discussed at the meeting was the lack of communication between Middletown and the University and its detrimental effect on the efforts to end these aggressive encounters. Additionally, students noted that no mention of these incidents was made in the Middletown Press or any other local publication.

“Middletown at large wasn’t aware of the incidents,” Updegrove said. “This problem stems from the fact that many Wesleyan students aren’t willing to report these incidents to the police. It’s hard to say what can be done about that, except keeping our behavior at a standard of mutual respect that we wouldn’t fear to report to police officers.”

However, the WSA and COCo say that they are working to improve interactions between the administration, students, and Middletown and to encourage students to speak up about incidents on campus.

“The Middletown Relations Committee [MRC], a subcommittee of COCo, has been meeting with leadership in Middletown regularly enough to keep them in the loop about the sentiments of Wesleyan students,” Ali said. “All students should feel free to contact their representatives, whether on the WSA or in the city, to express their concerns.”

“The Middletown Relations Committee has many ideas for how to address these issues,” Ali said. “In response to this incident, we are considering hosting a forum on campus safety. Such a forum would take into consideration senses of safety on- and off-campus.”

The WSA also plans to work to stop these incidents from occurring in the first place. According to several members of the WSA, it is striving to create a more secure campus and a safer environment for students.

“We’re actively working with all parties to improve the quality of the Wesleyan experience and to improve relationships within and outside the campus,” said WSA Representative Alton Wang ’16. “There will definitely be continued conversation [on] all of these topics within the Assembly as we begin to further address the steps that we will take in terms of these issues.”