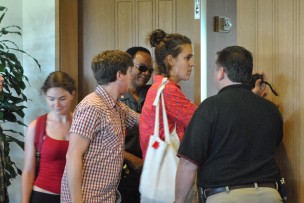 The need-blind admissions debate intensified this Thursday when seven to nine students were issued citations for having entered a Board of Trustees meeting without permission the previous Sunday. Charges were filed with the Student Judicial Board (SJB), which alleged that students were in violation of Section II, Regulations 14 and 15 of the Code of Non-Academic Conduct (CNAC) when they entered the meeting at the Daniel Family Commons (DFC) to encourage the Trustees to “bring them into the conversation” about need-blind admissions.

Beyond possible SJB sanctions, several of the students cited face the potential to be fired from their on-campus jobs as a result of their participation in the protest. Several members of the Wesleyan Student Assembly (WSA) have since formulated a complaint that they will deliver to the SJB arguing that the charges are in violation of other sections of the CNAC that protect students’ rights to hold demonstrations.

While most of the students involved in the protest last Sunday waited outside the main room of the DFC in which the meeting was held, some of them tried to gain entrance to it. Two Public Safety (PSafe) officers warned them not to go inside and used a camera to videotape the scene.

“There were two public safety officers, one with a camera,” said Cesar Chavez ’15, who was one of the students issued a citation. “A student directed herself to the door and tried to open it. The Public Safety officer told her to step away since a meeting was being conducted and students weren’t allowed [inside]. After that, several students went to help her and managed to open the door.”

Some students sat in front of the doors in order to prevent them from being closed as others proceeded to gain entrance to the meeting.

“Gradually we began to enter the meeting despite the attempts of the officers to keep us outside,” Chavez said.

The protest was nonviolent, and the students who did enter the meeting were able to express their concerns to the trustees inside. Despite President Michael Roth’s terse reaction to the activists, many board members expressed sympathy and interest in what the students had to say.

Benjamin Doernberg ’13, who also received a citation, brought a camera to record the events. Chavez said that the camera served as a precaution in case PSafe tried to use force to remove the students from the meeting. Doernberg posted the video online so that more University students could view the events of the protest.

“I can’t imagine being more accountable than recording the entire event and putting it online where it’s been viewed over 1,000 times,” Doernberg said.

The SJB has yet to make a decision regarding these students’ cases. On Sunday, Sept. 30, three student representatives from the SJB reported on the events at an open-forum WSA meeting. The SJB will likely be making its decision on the cited students’ cases within the week.

Several members of the WSA have formulated a complaint against the charges.

“The resolution spells out our argument for why the administration should drop the charges and should take a different approach,” WSA President Zachary Malter ’13 said. “And so we’re just going to be continuing to make that case to them.”

The complaint cites Regulation 12 of the CNAC, which states that students have the right to protest in an “an orderly and non-obstructive manner.”

“Demonstrators, however, do not have the right to deprive others of the opportunity to speak or be heard, take hostages, physically obstruct the movement of others, or otherwise disrupt the educational or institutional processes in a way that interferes with the safety or freedom of others,” Regulation 12 reads.

The complaint asserts that the students’ actions at the Board meeting should be protected under Regulation 12.

“The alleged violation of Regulation 14 refers to the warnings and instructions given to these accused students by Public Safety officers on 23rd September, while the violation of Regulation 15 refers to the entrance into a closed meeting, the Executive Session of the Board,” the complaint reads. “However, these actions, which can be clearly identified as a demonstration and sit-in, are protected as a legitimate mode of expression under Regulation 12, as these actions did not interfere with the safety and freedom of others.”

In his capacity as advisor to the SJB, Assistant Director of Student Life and Student Conduct Jonathan Connary expressed his desire to make students aware of the acceptable protest actions under the Code. He noted that it is possible for students to protest within its limitations.

“Many students over the years have successfully raised awareness about issues they are passionate about without obstructing the academic or administrative activity of the University,” Connary said. “My hope is that all students become more aware of what is allowed and what is not.”

Not all of the students, who were issued citations, believe that they will receive a punitive decision regarding their actions.

“I don’t expect to be sanctioned by the SJB,” Doernberg said. “The mission statement of the SJB is ‘to uphold the standards of the Wesleyan Community,’ which is exactly what we did at the Board of Trustees meeting.”

Other students are less certain about the outcome of their citations.

“I do not really know what repercussions [there will be] but I know what action I will take whether they are harsh or light,” Chavez said. “This citation will not deter me from continuing to engage in the need-blind debate. I will not be silenced and nor will the other students.”

The ramifications of the charges could be long-lasting for some students who may be liable to lose their on-campus jobs. The students might be terminated from their positions regardless of the SJB’s decision in the case. Yona Roberts Golding ’14 said she and at least one other student who received citations are currently employed by Residential Life (ResLife). Golding told The Argus that ResLife held a meeting yesterday to discuss whether or not they would be fired from their positions.  ResLife will likely be announcing its decision later today.

“ResLife doesn’t want people representing the University disobeying Public Safety orders, regardless of what Public Safety is saying,” Golding said. “[They say] there’s a way to protest that’s allowed, and there’s a way to protest that’s not allowed. Regardless of whether you lose your job or not, there’s the [likelihood that they will] put me and other staff members on probation. There’s also a possibility that they’ll have us do a program with Public Safety.”

Golding clarified that ResLife’s proceedings are entirely separate from the deliberations of the SJB. Doernberg said that he believes the protest did not warrant such action.

“We could not have made our point to the Board in a more respectful manner, and for students to be in danger of losing on-campus jobs for standing up for some of Wesleyan’s core values is an embarrassment,” he said.

Update: Oct 2 2012, 12:40 p.m. Yona Roberts Golding ’14 has told The Argus that she will not be fired, but will be put on probation and will be required to meet with Public Safety in some capacity. The decision regarding the other student(s) employed by ResLife has not been reported to The Argus at this time.