Bradley Whitford ’81 Walks and Talks at the Goldsmith 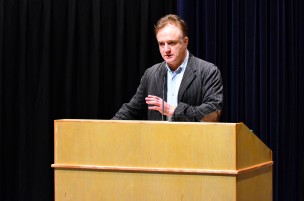 At 10 a.m. on Monday, Sept. 24, actor and new Board of Trustees member Bradley Whitford ’81 gave a talk in the Center for Film Study’s Goldsmith Family Cinema. That’s a pretty ambitious start time for most college kids, but Whitford’s reputation and the promise of free breakfast drew a sizeable crowd of film students and Whit-fans. An Emmy winner and multiple nominee for “The West Wing,” Whitford has appeared more recently in “Parks and Recreation” and “The Cabin in the Woods.” In hipster goggles and a blazer with awesome elbow patches, he proved to be an extremely entertaining speaker, and attendees walked away with heaps of valuable advice on Hollywood and politics.

Whitford began by describing his career and the struggles of being a creative in any capacity in Hollywood. His main piece of advice was to keep writing, no matter what field you’re aiming to enter. Additionally, he weighed in on the current state of Hollywood blockbusters compared to the New Hollywood stock of his childhood and said that contemporary comic book tentpoles “are just massively-produced B movies.” Whitford also spoke on the current state of politics and the funny proposals he gets as an actor who has played a politician on TV (he is a very liberal columnist for the Huffington Post but has no interest in taking office).

I asked Whitford about bad direction and what actors do with it, and he claimed actors go through three phases of response to any piece of direction they receive: “Fuck you; I suck; Okay, what?” He also went through some common directorial mistakes—“Zen-fuckers” who overblock, rushed directors who bark orders right before the camera rolls—before sharing a hilarious anecdote regarding Clint Eastwood’s famously minimal directorial style. The man does a great Clint impression.

Whitford concluded his talk with an empathetic address to the current transition to need-aware admissions. “Access and diversity are, from my experience, the priorities of the students and the Board,” he stated, and he hoped  that the administration’s good intentions make it through the university’s financial difficulties. Josh Lyman is running our school, you guys! That’s so sick!