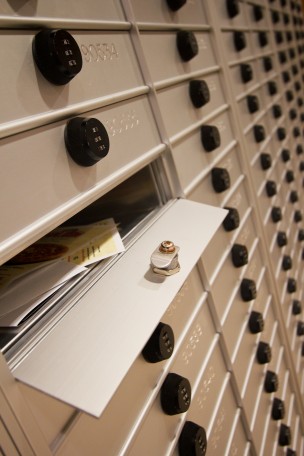 At the beginning of the 2012 fall semester, some students were surprised to return to campus and realize they were sharing a Wesbox with another student. Before the creation of Usdan, sharing a mailbox on campus was common in the old University mailroom. But when Usdan opened its doors in 2007, University officials thought the days of sharing were over.

However, the unusually large size of the Class of 2015 quickly made that impossible. Associate Director of Information Technology Auxiliary Services Allen Alonzo explained that last year approximately 150 freshmen shared mailboxes, and when the class of 2012 graduated, mailboxes were shuffled around again.

“Mailboxes are assigned geographically within the block of mailboxes,” Alonzo said. “Traditionally the senior class is the smallest class, so there’s a lot of overflow in that area. When they moved out, a lot of people were shot-gunned into that area. Unfortunately a lot of those are now juniors or seniors, so it’s their first experience sharing mailbox.”

Some students felt they were not properly notified that they would be sharing a mailbox. Lane Harris ’14 said that she was reassigned to a new mailbox over the summer and did not realize she was sharing it until about two weeks into school.

“I found out when the person I was sharing with emailed me saying I had a bunch of stuff in their mailbox,” Harris said. “So then I checked on my portfolio finally.”

Hanna Bahedry ’14 also said she was unaware she was sharing a Wesbox until she received a box that wasn’t addressed to her and brought it to the mail desk, where an assistant there confirmed that she now shared a mailbox with another student.

“I personally am very annoyed that I have to share a mailbox, not only because I wasn’t told but because a person’s mail is oftentimes extremely personal or in many cases valuable—in the case above, the girl had received some expensive-looking jewelry, and I totally had the opportunity to steal it, had I been someone else,” wrote Bahedry in an email to The Argus.

Alonzo said that in the communication package delivery system and My Digital Doorman, there was a blurb that reminded students to check their box number in their portfolio because it could have changed.

“[Sharing a Wesbox is] not new to us, so that’s why it was thought of as part of the normal process,” Alonzo said. “We probably miscommunicated, not realizing that there were students who had never shared a mailbox before and will [now] have to share.”

Alonzo also noted that he thought last year’s freshmen would continue to share mailboxes as they had in the past. But because the mailroom tries to clear out a block of mailboxes for each class, some upperclassmen were forced into sharing their mailboxes.

“It’s all a numbers game,” he added. “There’s X amount of mailboxes and Y amount of students. And if we want everyone to pick up their mail, that’s the way it has to be.” According to Alonzo, the University’s legal counsel has not found anything wrong from a regulatory perspective. However, some students think that sharing a mailbox raises privacy issues.

“I’ve received many confidential letters in the past and would be extremely uncomfortable if I’d learned someone else had accidentally read them,” Bahedry wrote. “I feel like it’s a violation of our right to privacy to be made to share a box with a complete stranger, regardless of the fact that they are a Wesleyan student… Ultimately it shows the lack of respect the Wesleyan administration has for our individual privacy, and I’m actually shocked that this is the solution they chose and wonder if it’s even legally justifiable.”

Harris said that she was more bothered by the lack of communication regarding her Wesbox change.

Alonzo noted that the University has been able to accommodate those students who are strongly opposed to sharing with another student.

“If we don’t have anything currently available we can put them on a list,” he said. “If someone transfers out, or a student leaves the University and a box becomes open, we can move them.”

Students who would like to talk about an accommodation or have any further questions should contact Mail Services Supervisor Holly Nicolas at hnicolas@wesleyan.edu or Alonzo at aalonzo@wesleyan.edu.