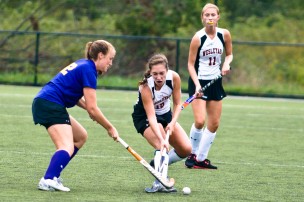 After returning to campus from a shortened summer break, the field hockey team jumped directly into a grueling regimen of two-a-day practices. The Cards are working hard to build upon a successful 8-7 2011 campaign and are hoping that this year will bring a fifth consecutive winning season to the program.

In addition to the veteran coaching staff, the team returns 14 letterwinners, with a roster comprised of eight starters from last year and six players from the class of 2013. Leading the team are co-captains Tori Redding ’13 and Ashley McLaren ’13.

Redding has started in goal since her freshman year, and has truly been the backbone of the team since 2009. Impressively, last season Redding played in every minute of every game. She has notched 12 career shutouts, six of which are from the 2011 season, and has started 45 consecutive games. While Redding keeps the shots at bay, McLaren puts pressure on her NESCAC opponents offensively.

Although the team has a number of returning players, the freshman class adds an additional nine players to the roster. 2016 boasts two goalkeepers, two attackers, three defensive players-—the rest are midfielders.

Over the past 11 seasons the Cardinals have made 10 playoff appearances. With the help of an experienced coach, a veteran roster, and a large, youthful freshman class, the Cardinals may have the perfect recipe for a dominant season.

“We are looking to make a statement in our competitive league starting this weekend against Bowdoin,” said starting attacker Blair Ingraham ’14. “We want to score first on all of our opponents this season and be the Wesleyan team that nobody expects.”

The Cardinals kick off their season this upcoming Saturday, Sept. 8 at Bowdoin College. Last season, the Cardinals battled the Polar Bears evenly, until the final two minutes of the game when the Bears scored and trounced the Cards.