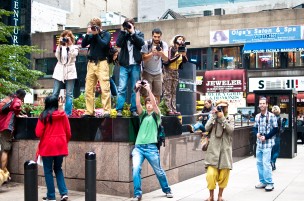 When police officers kettled 700 protesters on the Brooklyn Bridge last month during an Occupy Wall Street rally, hundreds of marchers filmed the scene with their camcorders and iPhones, some even scaling the suspension cords for a better vantage point. “The world is watching!” these camera-wielding protesters chanted at police, as the arrests were live-steamed across the globe.

Some of the most iconic footage from the Occupy movement thus far has been shot by protesters and “citizen journalists”—the clip of kettled female protesters being pepper-sprayed in New York, and more recently, the police officer in riot gear dispassionately pepper-spraying a line of seated protesters at UC Davis.

Ben Doernberg ’13, who considers himself a citizen journalist, has been covering Occupy from his dorm room, primarily using Twitter. He created a Storify—a social media platform where tweets, photos, and videos can be strung together into a narrative—after gathering reactions from journalists who were prevented from covering the purging of Zuccotti Park by the NYPD. The Storify has garnered over 22,000 views so far, and was picked up by major news outlets, including The Washington Post and The Atlantic Wire.

“I really don’t think that there’s a better way to instantly know what’s going on in the world than with Twitter,” Doernberg said. “There are people on the ground who are tweeting and taking videos and taking pictures. Then there’s another set of people, which I consider myself part of, that filter through that and forward on the relevant on-the-ground information.”

Blogging, which almost seems antiquated when compared to live tweeting and live streaming, has been the medium of choice for former Argus Editor-in-Chief Ezra Silk ’10, who recently quit his job at a local Maine newspaper to cover the movement independently.  His blog, America Occupied, features first-person accounts from his visits to occupy sites across the country. He has been to 16 sites so far, mainly in the South and the Southwest, and has taken photos, videos, and has recorded dozens of hours of interviews.

“I’m relatively convinced that these protests are becoming historic, so I want to add something to the record,” Silk said. “It’s cool to be able to get people’s reactions around the country to [the movement] as it goes on—it might be of use to someone some day.”

One issue that inevitably arises with new media is bias. Citizen journalists are not constrained by the same rules of objectivity as professional journalists. Both Doernberg and Silk say they are pro-Occupy, a position they make clear in their writing.

Silk questions the notion of absolute objectivity, saying that it is more important for journalists to present the issues in a way that they think accurately reflects the world, rather than give all parties equal say. He also distinguishes his reporting from writing that is purely political.

“I think what I’m doing tends to be more independent than what a lot of citizen journalism is, which is propaganda in which people go out as partisans…that is straight-up politically motivated,” he said.

Doernberg accuses mainstream reporters of putting a spin on the events they cover. By presenting what he sees as raw, unadulterated information from the ground, he hopes to allow viewers to come to their own conclusions.

“I would see the photos and the videos of what would happen, and then I would just see it get grossly distorted or ignored in mainstream media coverage,” Doernberg said.

Gianna Palmer ’10, who is currently reporting on Occupy in New York for McClatchy Newspapers and contributing to Silk’s blog, has a different view. Palmer graduated from Columbia University Graduate School of Journalism last spring, where she concentrated in digital media. During her time at Wes, she and Silk were co-editors of the Blargus—the now-defunct blogging arm of The Argus. Palmer said that, while new media is becoming more prominent, she does not see it completely usurping the role of traditional media.

“I do think that Twitter is very helpful for giving news as it’s breaking in real time, so for example when the raid on Zuccotti Park happened, it was more helpful to follow the hashtag ‘OWS’ on Twitter to see what was happening and watch the live stream,” Palmer said. “But I think that journalism’s job is to provide context and do more than just throw out what’s happening at the moment.”

Context may be especially important in the case of Occupy because of the complex and scattered nature of the movement. Over 600 cities have been “occupied” so far, and while there exists a loose framework that ties the movement together, there is no denying that each occupation is distinct.

To illustrate this fact, Silk pointed to a protest in Nashville against Corrections Corporation of America, the largest private prison company in the country.

“They did a theatrical slave auction to demonstrate how they feel about the private prison industry and its practices, its use of low-wage labor in its prisons,” he said. “That was extremely controversial, because a lot of people felt that they were cheapening the legacy of slavery.”

While social and economic inequality remains the primary focus of Occupy movements, the issue of mainstream media bias has consistently reared its head. Allegations of major media outlets ignoring the movement arose in the early stages of Occupy. When protests grew too big to go unnoticed, Occupy supporters complained that the media consistently misrepresented them as unruly hippies, or only covered the angle that the movement lacked coherency.

“There was a Washington Post article the other day that was just horrible,” Silk said. “It was a news article trying to show how big of a nuisance these [protests] have become. And there was a line in there that was just extremely sloppy about how the only occupation where city officials and protesters are on tentatively good terms is in Washington, DC, and I can tell you for sure that that is absolutely not true.”

Palmer agreed that some major media outlets stumbled at the beginning of the movement but said she has noticed a drastic increase in coverage since then.

“I’ve seen a lot of magazine covers…where the lead story is about Occupy, and that’s been going on for weeks now,” Palmer said. “I think it’s really changing the national conversation about the status quo, politics, and income inequality and the U.S. financial system.”

Silk, Palmer, and Doernberg all plan to continue covering the movement for its duration—Palmer for McClatchy, Doernberg from his dorm room, and Silk on strangers’ couches.

The political ramifications of Occupy Wall Street remain to be seen. In the meantime, however, another revolution may be stirring on the media front—one in which camcorders and hashtags could prove to be the most powerful weapons.