The Good and The Bad: A Week of Arts in Review 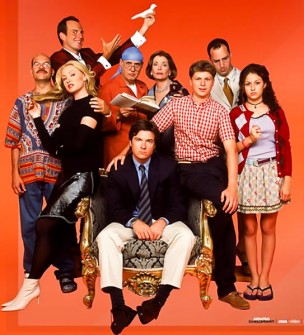 Get your money out of the banana stand, bust out your best chicken dance and (always) leave a note. It’s not a trick, Michael. Five years after the show’s heart-wrenching cancellation, legendary cult comedy “Arrested Development” is back. Series creator Mitch Hurwitz announced a new season of the surreal capers of the Bluth family at the New Yorker Festival this week,  leading up to a feature-length movie, itself an object of much speculation. The season will be comprised of nine to ten episodes, each focusing on one of the fantastically infantile Bluth clan. Maybe now, those TV execs will realize they’ve made a huge mistake.

Students confirm that newly-formed  super group Wild Flag is storming Eclectic next Thursday. Rising from the ashes of Riot Grrrl legends Sleater-Kinney, Wild Flag dropped their eponymous debut album last month, brimming with 90’s indie rock scuzz and Stones-era swagger. With Carrie Brownstein’s slash-and-burn guitars, Janet Weiss’s manic drumming, and all the transcendental badass girl power your puny mortal form can handle, Wild Flag will baptize you in the fiery waters of punk-rock glory. Ducktails, aka Matt Mondanile aka guitarist of New Jersey psych-surf darlings Real Estate, opens with his swirly, woozy solo jams. He’s played with Panda Bear, which makes him kind of cool, I guess. Tickets are $5, and should go on sale this weekend via Aural Wes.

Who needs Radiohead? Notoriously mysterious Jeff Magnum may be the only person alive to pull off an album based around a really friggin’ creepy fascination/love for Anne Frank. The fact that “In the Aeroplane Over the Sea” is one of  indie rock’s most triumphant masterpieces is a testament to the man’s off-kilter genius. After years of borderline hermitdom, Magnum’s been slowly peeking out into the public sphere in 2011. He miraculously apparated this week at the Occupy Wall Street protests playing a surprise set for those anti-corporate warriors lucky enough to catch him. With only an acoustic guitar and his strangled nasal yelp of a voice, Magnum ripped through some of his most loved tunes, claiming, “You guys have done a beautiful fucking thing.”

After a long and trying battle with a rare from of pancreatic cancer, Apple CEO and technological visionary Steve Jobs passed away on Oct. 5. The man near single-handedly revolutionized the way we think about computers and defined technology for the millennium. He plucked computers from their place in the office and brought them into your home, your lap, and your hand. In an outpouring of grief, friends, fans, and enthusiasts took to their iMacs—and PCs—to post their condolences throughout the cybersphere. Semi-benevolent overlord of Apple, Jobs ruled the technology market with a visionary, iron fist, setting the bar for the personal computer, the MP3 player, and the tablet. Jobs, who stepped down as CEO in August, combined technology and culture into a ubiquitous, unstoppable force, defining a generation.

We’ve been damn excited for Pottermore. We lie awake at night, visions of virtual house sorting dancing through our heads. Yet, once again, J.K. Rowling has shot an avada kedavra at our collective hopes and dreams. Originally announced to open to the public on Oct. 1, at the end of September the beta site was opened to all one million pre-registered users, overwhelming the site. As a result, they’ve extended the beta through the end of the month, and plan to open registration again at the end of October. Doesn’t sound too bad, right? Here’s the kicker: Pottermore’s official blog reads, “We’ll be giving access to registered users in phases. Access may be granted quickly, but please note it could also take some weeks or months, depending on demand.”

Playboy Club Can’t Get It Up

Despite the huge buzz surrounding it and no shortage of attractive women in skimpy, mid-century lingerie, NBC axed its new series “The Playboy Club” after only three episodes. The project, on some levels, seemed doomed from the start: a 1960’s period piece about a Chicago gentlemen’s club evolving into the most ubiquitous brand in the (ridiculously huge) world of adult entertainment held to the family-friendly standards of a broadcast network? Alas, the booze, sex, and general bacchanalia never had their chance to flourish—castrating a distinctly adult show for the kiddos’ sake was, well, simply a bad idea. I guess we’ll only have “PanAm” to fill our weekly quota of sexy waitresses. Bummer.