The World’s Sport–Shame on Spain; or, Why the European Soccer System is Broken

May 9, 2010, by Gabe Lezra, Blargus Sports Theoretician and Political Scientist

At the end of this season of the Liga BBVA, one thing will be clear: Spanish soccer is guilty of fraud. We fans were promised a “league of stars,” called “the best league in the world” by most Spanish news sites–especially now, during Florentino Perez’s neo-galáctico era. We were promised a competitive, interesting display of wonderful soccer; we were promised a variety of interesting sub-plots, from Cristiano Ronaldo’s Madrid debut, to Valencia’s economic situation, to Messi’s comparisons to Maradona. Who promised us these things? The teams themselves, the system that creates matches; it is the LFP, the Liga BBVA’s purpose to create drama and entertainment, competition and beauty. It has failed.

What we have instead is a boring, broken system: on one hand we have a team that set the league record for points, and on the other a team that set the league record for wins (Barça and Madrid, respectively). We have a league devoid of competition, of drama–my great soccer idol, my hero, and my favorite player of all time, Zinedine Zidane said, “in my book, both teams are champions.” Yeah, they are. And we all lost because of it. We have suffered through a yearlong competition that has epitomized why the Spanish league is not the best in the world: to semi-quote Jeff Foxworthy (who has absolutely NO place near soccer), “If your entire yearlong league boils down to two matches, you MUST be boring.” It has become an inevitability that Real Madrid and Barcelona will win their matches; the only “drama” this terrible year has brought are the games between the two.

[ADDENDUM: This column was written before the last match of the year, but frankly at this point, even though I’m an extremely avid Real Madrid fan, I don’t care who wins. This year has been terribly boring on every front, including ours.]

I wrote a column back in November about why the Spanish league was better, more interesting, than the EPL–I argued that because of the large amount of variation in the top four teams in Spain, it necessarily means that the Spanish league is more competitive. This is wrong on several accounts: firstly, it semi-arbitrarily defines the league’s “competition” as the number of separate teams that have placed in the top four. Secondly, and perhaps more importantly, it focuses on the EPL’s “Top 4,” as opposed to Spain’s “Top 2,” asserting confidently that the EPL needs teams to come in and break the cycle of the Top 4 teams. When was the last time a team not named Barça or Madrid won the Spanish League? 2004.

But this isn’t a comparison piece on England and Spain–actually, the point of this article is that they both suck, just Spain slightly more so. What do you have when it’s only the same two teams competing year after year? No, the answer isn’t “good television”; the answer is Scotland. And that’s what Spanish soccer looks like right now. Spanish soccer–and I’m really just talking about the League, because the Copa is really a step down–is a microcosm for, and get this, the American political system. In modern Spanish soccer we have a physical representation of Duverger’s law of political parties, that all of us Poli-Sci people know so well–“the simple majority [winner take all], single-ballot system favors the two-party system […] and both the simple-majority system with second ballot and proportional representation favor multi-partism” (Maurice Duverger, Political Parties, ed.1954). Spanish soccer allows for neither a “second ballot,” nor “proportional representation”; thus, we repeat the same two teams over and over. I know this is a weak analogy, but I think it’s funny and especially pertinent, considering the absurd distance between Madrid/Barça and the rest of the league. 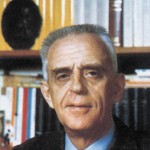 What can Duverger tell us about the Liga BBVA?

How did we get to this bleak outlook? Spanish soccer, and European soccer more broadly, epitomizes the capitalist spirit: by allowing teams unbridled use of financial power (expressed most vividly by my Real Madrid), European soccer allows the rich to get richer and the poor poorer. We speak of the “galácticos” era as if it was a failure: it was a massive success–it made Real Madrid billions of dollars (and yeah, I do mean billions). Now, Madrid can flex their financial might, buying incredible players and coaches–we don’t like to lose, damnit.

But guess what? This isn’t just about Madrid. Sure, we can drop hundreds of millions on transfer fees, but so can every major club in Europe: Barça spent 70 million (or more) total euros for one player (Ibra); ManU has spent many millions in the past; and do I even need to mention Chelsea and Man City? There is a systemic problem with the way Europeans go about dealing with the business aspect of soccer–and this problem is killing the game. The widening gap between England’s Top 4 and the rest of the league, or between Spain’s Top 2 and the bottom 18 (because that’s what they are) has killed the concept of competition and entertainment in league play. “Sleeper” or “underdog” teams don’t exist in England, Spain or even in Italy; all we see are the same, tired faces at the top of the league tables.

Ironically, on a continent known for liberal democratic socialism, we have the epitome of a conservative, capitalistic utopia: because of the unbridled, unregulated competition–economically–we have seen the rise of monopolies (the Madrids, Barças, Man U’s, Liverpools, etc). The answer to the European soccer problem, even more ironically, can be found on the continent of the Hartzian “liberal consensus,” where we are so “locked in Locke,” that we can’t answer the call of social change: the revenue-sharing and salary-cap systems of the major American sports leagues–while being far and away the most socialist enterprises in this country–can at least begin to fix the problems of parity in European soccer. Spain, and European soccer (FIFA) more broadly (are you listening Sepp Blatter, ya douche?) MUST implement a revenue-sharing system along with a stringent set of salary caps; teams over the salary cap should be forced to pay a luxury tax, to be dolled out to the other teams.

Is this actually going to happen? No. Could this help fix the parity problem in European soccer? Maybe. Will FIFA remove the massive object from its’ collective nether region? Never.

Or maybe I should watch this–at least it’s interesting: 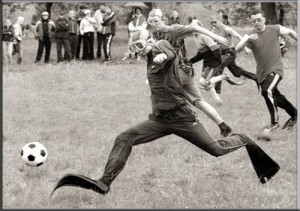 This image is called "Soccer in Atlantis." More fun than the EPL or the Liga, I think.