Star Wars, The United Nations and The New Galactic Order

May 4th is International Star Wars Appreciation and Recognition of Being the Best Movie and Story in the History of the World Day; May the 4th be with all of you (BOOM). In appreciation of this monumental day of days, I have compiled–because the “real” Argus is done publishing for the semester–a Top 5 list. This could obviously, be a much better, more exhaustive, and ultimately infinite list, but I’m going to keep it to 5:

T5. It actually can tell us how to run our international system. No joke. More to come on this after this list.

T5. Lando Calrissian is arguably the slickest character of all time, plus he’s played by Billy Dee Williams, plus he’s absurdly funny, plus he’s a great pilot and a champion. To put him tied for 5th? “This deal’s getting worse all the time.”

4. Episodes I, II, and III provide some of the most memorable, absurdly funny quotable lines in the history of cinema. A quick example: “Hold me, Anakin, like you did on Naboo!”; or “Only a Sith deals in absolutes”; or “You were the chosen one! You were supposed to destroy the Sith, not join them! Bring balance to the Force, not leave it in darkness! You were my brother, Anakin. I loved you.” “I HATE YOU!!!”

3. Fucking Yoda. The dude is Budha combined with Jesus. Plus he’s green and flies around with a lightsaber in Episode II.

2. Chewey. “Rrrraareeraaahh rhu rhu rhu rhu rhu,” “Laugh it up, fuzzball!” This character never says a word we can understand, but is still arguably the most beloved furry character in cinema.

1. Han. The best character of any movie ever. ‘Nuff said. 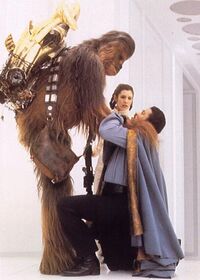 Chewbacca chokes Lando--"I had no choice."

Please feel free to post below all the things that I didn’t include that deserve to be included. Remember, this was a Top 5 list, not a 100% exhaustive list of all the reasons that Star Wars is the best thing ever. That would actually be impossible because it would take an infinitely long amount of time to write. But I appreciate the sentiments.

Alright, here’s my treatise on Star Wars and international relations: I’m going to start with a short history of the Star Wars universe’s galactic political systems. [MAD shout-out to the pros over at Wookiepedia for helping me with this].

The First Galactic Constitution was signed around 25,000 “years” before the Battle of Yavin, more commonly known as Episode IV. Its founders were unknown, but it remained–though altered–as the locus of galactic Governmental authority until the Emperor dissolved the Republic. The Galactic Constitution has a lot in common with the American Constitution, though with one major difference–there is no House of Representatives, only a Galactic Senate. The Galactic Senate, however, consists of two thousand members, some senators representing whole systems; others planets; and others confederations or guilds. It was presided over by a Supreme Chancellor, who also acted as the executive authority; no Supreme Chancellor could serve more than two four-year terms (sound familiar?) until Chancellor Palpatine enacted the “Emergency Powers Act” about 24 years before Episode IV (i.e. at the end of Episode II/beginning of Episode III). The Senate had control of the military power in the galaxy, though this was extremely negligible until the creation of the Clone Army (Episode II); before that, the Jedi mainly took charge of the enforcement of the Republic’s laws.

The Republic became the empire when Emperor Palpatine–AKA Darth Sidious; AKA Supreme Chancellor Palpatine–took control of the Senate shortly after the full-scale outbreak of the Clone Wars in Episode III. The Galactic Senate became the Imperial Senate, but had almost no control; Sidious disbanded the Senate in Episode IV, and replaced it with a system of regional governorships, who would obey the Empire because of their fear of the Death Star.

OK. It’s totally fine if you skipped that part. This is the important stuff: what we have now is an international system that closely resembles the Galactic Republic, except with an even weaker nucleus of power. The United Nations has a Supreme Chancellor (essentially), but no Jedi Army (or Clone Army) to enforce its laws; instead we have a relatively weak system of trade embargoes, restrictions and sanctions that don’t really help with major international problems. While the Galactic Republic was mainly based on a relatively weak system of trade regulations and sanctions as well, at least it could enforce the rules through military strikes when need be: for example, the Jedi presences during the Battle of Naboo (Episode I) is a good example of the way the Galactic Republic can help individual systems suffering from outside oppression.

Like the American model, the Galactic Constitution refocused much of its power into the executive branch after a series of galactic catastrophes; this lead to the Jedi agreeing to subject their actions to the Republic (for the super-nerds like me: this is the Ruusan Reformation). The Republic’s executive branch now had at least partial control over the Jedi, and total control over the Republic’s military. While this control amounted to small, incremental changes, it still lead to greater enforcement of fair trade and less cultural domination.

Some of these changes, however, lead to a rise in pan-Galactic organizations like the Trade Federation and the Techno Union, which both developed their own military. We are at risk of this sort of thing today in our own international system–perhaps not militarily, but culturally: the rise of hard to regulate international organizations could prove to be a threat to the sovereignty and power of the United Nations.

Maybe I’m being a bit too pro-UN here: as you should probably know by now, the idea of the Galactic Republic is an allegory for where I think the UN should go. We need a strong, central authority, governed by a coalition of countries, with its own standing army. This way we can really enforce international treaties, act quickly with regards to human rights abuses, and even stop wars before they start.

At the same time, though Star Wars shows us the perils of taking this kind of thinking too far: the Empire is analogous in this allegory to our own tendency to tyrannical rule that we have exhibited for thousands of years. Remember Rome? Yeah, we started that off as a “Republic” too. Look how that turned out.

And I get that. But I think that if we can learn from the mistakes that we made in the past (and in Star Wars!), then we might be able to successfully rethink our international system. To quote an old friend: “Never tell me the odds.”

For the two of you who read this whole thing: thanks. For those of you who read the Top 5 and then were all “whoa, buddy, this is way too nerdy. Tl;dr” I get it. I know, I love Star Wars–I grew up on the movies, the books, and yeah, even the “behind the scenes with George Lucas” video tape. I’m a fanboy. And to all you other fanboys/girls out there–I love you too. 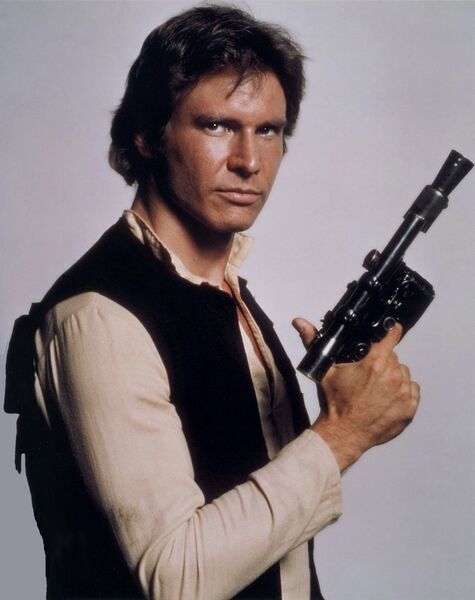 "Hey Luke--May the force be with you"