Healthcare: A Short Thank You

March 23, 2010, by Gabe Lezra, Head of the Argus Sentimentality Division

With President Obama’s signing of the Patient Protection and Affordable Care Act came the end of an era for a generation of Democrats, many of whom I know very intimately and have the greatest affection for; and while I might not necessarily be the best person to write this kind of column, that is, a political ramble, I didn’t just want to leave it to Mytheos.

At the same time, though, this column isn’t meant to lay out all the good things (or bad things) that the bill does, and then render some sort of judgment on them; neither is it to make some sort of ridiculous prediction of the political costs either major party will incur in future elections.

No. This column is to say thank you to a single man in particular, a man who has been my role model since I can remember, who has always steadfastly supported his positions with the greatest honor, who lead me through times when I dabbled in radicalism, and who taught me how to think–I can see no greater compliment to give a person.

In 1994, my grandfather, Senator Harris Wofford, lost his re-election bid for Senator of Pennsylvania to Rick Santorum; one of my memories of that campaign was riding around in a convertible, yelling through a loudspeaker “Please let me have healthcare! Vote for Wofford for universal healthcare!” I remember hearing people yelling things–which I later found out were homophobic slurs–and holding signs with guns on them. Those were the Tea Baggers of 1994. We lost that election, as my grandmother would say, because the Republicans made is about guns and gays; we may lose this next election for the same reason. My grandfather didn’t get to go back to the senate to try to finish his dream of providing universal, affordable health care to all Americans.

He had campaigned on the promise in 1991, in a special election where he beat former Governor Dick Thornburgh because of his promise to provide cheap, high-quality health care; he began the race so far down in the polls that most Pennsylvanians didn’t know his name. But he came from behind to win by ten points because the people of Pennsylvania wanted health care. 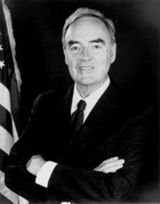 Throughout his career my grandfather’s great purpose, his calling as he would say, has been civil rights: he was the first white man to graduate from Howard Law, and immediately became an attorney for the United States Commission on Civil Rights. He became close friends with Martin Luther King Jr., and an early advisor to John Kennedy’s 1960 presidential campaign. In 1961, he was appointed Special Assistant to the President on Civil Rights, and since then he was vital in pushing for civil rights legislation, and the creation of the Peace Corps.

Why am I telling you this? Well, with the passing of the first health care bill, my grandfather’s fight for civil rights has entered a new chapter. We owe him, and the people who helped build this groundswell social movement for Civil Rights thanks, not only for helping us to pass this landmark, once-in-a-generation bill, but also for having the man who signed it into law have an African first and last name and a Muslim middle name. Because of the great warriors, the Ted Kennedys, the Bill and Hillary Clintons, the James Carvilles, the Paul Begalas (both of whom were Harris’ campaign managers in ’91), the Nancy Pelosis, and yes, the Harris Woffords–because of the generation of people who didn’t give up–we now have the foundations of a new Civil Right: health. We may not have a perfect system; but we have the pillars, the beginnings, of a better one.

EDIT 10:20 p.m.: I’d like to include a short letter that Paul Begala sent to Senator Wofford todays as President Obama prepared to sign the historic piece of legislation.

As I watch the House pass historic health care legislation, I can’t help but think of your visionary, courageous leadership.  It was you who lit this fire, my friend, and now hundreds of Americans will be able to warm themselves in the glow.  I pray John and Robert, Martin and Teddy are smiling on us. God bless you.