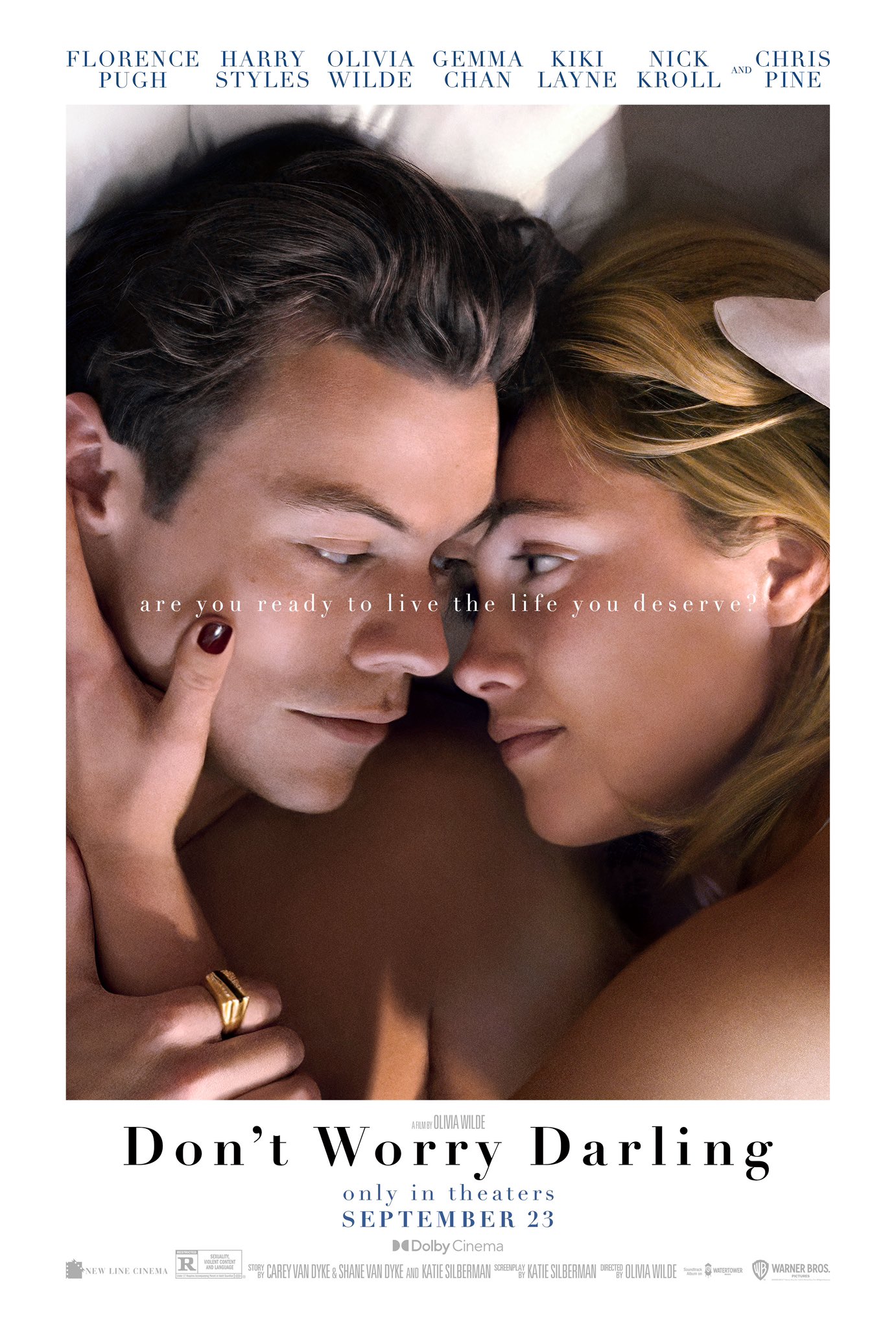 There was a palpable sense of anticipation in the air at Metro Movies in downtown Middletown on Friday night. Maybe, I thought, this is what it felt like to line up to see “Citizen Kane” on its opening night. This, I was sure, was going to be a monumental night at the pictures. I had told virtually every person in my life what my plans were for that night: I would attend the 8 p.m. screening of the new psychological thriller “Don’t Worry Darling,” directed by Olivia Wilde, then would spend the rest of my evening pretending to have finally understood what Kant meant when he spoke of sublimity.

My excitement grew after watching teaser clips leaked onto Twitter, reading tepid reviews, and hearing remarks from Harry Styles, one of the film’s stars, at a Venice International Film Festival press junket.

At the risk of sounding gauche here: Frankly, darling, I was a little worried. Yes, it’s not very fair to have such negative preconceptions before seeing a movie, but coming out of “Don’t Worry Darling”—a film besmirched by tall tabloid tales of behind-the-scenes romances and altercations and spitting incidents, and whose leading lady, Florence Pugh, has refused to publicly promote it—I couldn’t help but notice that I was gifted a mystifying, perplexing piece of cinema, something that, strangely, filled me with the same sort of intrigue that Tom Hooper’s ill-fated 2019 adaptation of “Cats” did.

Again, it’s not very fair that I was expecting something banal and shallow before I even had the chance to sit down and watch a movie that, to quote Styles once again, “Feels like a real, like, you know, go-to-the-theater-film movie.” And yet the elusive comma missing from the movie’s title, Pugh’s apparent reticence during its release, and rumors of Styles’ wooden performance were all tell-tale signs that this was something I couldn’t afford to miss.

But is it really the 1950s in the isolated community of Victory? The usage of Mel Tormé songs would indicate an early sixties timeline, but more on the narrative inconsistencies later. Nevertheless, Alice and Jack are just one of a community of perky young couples living in Victory, the kind of breezy company town where the doting housewife waits idly for her husband to come back home from his 9-to-5, ready to fix him a dry martini and put on a smooth bossa nova record. It’s a highly stylized and beguiling world, with Victory’s architect, Frank (Chris Pine), presiding over the town as its charming, suave overlord.

The mystery lingering under Victory’s glitzy surface seems evident, even too much so, during the first half of the film’s two-hour runtime. Clearly, the housewives of Victory have been taught to turn a blind eye to the mysterious mission of the Victory Project, and they’re blithely unaware of what their husbands are up to all day long. Obviously, it can’t be anything good.

It sure is nice to sit poolside and sip strawberry daiquiris and take ballet classes all day, but Alice doubles down on her hunch that there’s a darker side to the Victory Project and takes on some mischievous exploration. She’s inspired by Margaret (Kiki Layne), a fellow Victory housewife who’s been in a disturbing state of mental disarray after having stepped into the forbidden desert by the community’s outskirts. When Alice goes beyond the city limits one fine day and witnesses a plane crash, her own dizzying hallucinations and fits of frenzy ensue.

Pugh, a versatile, always-in-demand British starlet, elevates the material here, and her performance is easily the artistic apex of the film. Her signature husky voice and her command of sticky 50s housewife customs make her Alice both edgy and eerily affable. The bubbly wine mom Bunny (played by Wilde herself), Frank’s loyal wife Shelly (Gemma Chan), and the always pregnant Peg (Kate Berlant, in a standout comic performance) add some flavor to the film’s ensemble.

But Styles, given plenty of dialogue, and, oddly enough, an interlude to display his competence at pirouetting and turning C jumps, really can’t act his way out of a paper bag. Towards the film’s climax, it’s morbidly fascinating to watch him try and figure out how to balance Jack’s supposed charm with his overwhelming, frenetic insecurity. Otherwise, Styles mumbles his way through Jack’s more tense moments and screams at varying decibel levels to express emotions ranging from “mad” to “really, really mad.” By acting opposite Pugh, his stodgy performance, unfortunately, sticks out.

“Don’t Worry Darling” is perfectly fine to merely look at, and Wilde clearly has the directorial eye to hook viewers into her “Stepford Wives”-esque world of creepy suburbia. The stifled, staccato breaths peppered throughout composer John Powell’s score evoke a mild sense of fright. The 15-second samples of Dizzy Gillespie, João Gilberto, and Ella Fitzgerald classics played throughout the movie are suitable. But the rest of it is schlocky and shockingly silly, but, of course, wildly entertaining. Much of my confusion, frustration, and even elation comes from the mind-boggling twist that explains Frank’s vision for Victory.

Essentially, the Victory Project is a simulation of a 1950s fantasy land created by Frank who, in the “real world,” is a chauvinistic podcaster based on the likes of Jordan Peterson and Andrew Tate. Frank inspires Jack, an emasculated, unemployed husband, to kidnap his wife Alice, a successful but overworked surgeon, and join Frank’s experiment. Here, Frank, Jack, and hoards of other men can live vicariously through their simulated breadwinner alter-egos and strip their wives of their autonomy.

The specific scientific and logical limitations of the Victory simulation are not made clear by Silberman’s script. Once Alice learns the horrifying truth, the rest of the Victory housewives are inexplicably simultaneously enlightened (Shelly, just a minute after defending her husband Frank, turns a literal knife into his heart). Audiences are left with more questions: What is Jack’s endgame here? Doesn’t his wife have friends, coworkers, and patients looking for her out in the real world? Are Bunny’s children real? If so, how the hell were they coerced into this whole thing? Is it because Bunny is down to play house with her incel husband? I guess that any narrative flaws or inconsistencies within the Victory Project can be chalked up to the incompetence of Victory’s founders, which, admittedly, is a smart move on Silberman and Wilde’s part.

But ultimately, “Don’t Worry Darling” isn’t the astute condemnation of terminally online incel culture that Wilde wants it to be nor the critique of said culture that audiences should expect given the ambitious and utterly bananas plot twist. At Metro Movies on Friday evening, the big twist elicited some groans of disappointment, and, from my corner of the theater, many giggles of disbelief. Otherwise, laughter was heard throughout the rest of the movie, mainly at Styles’ expense (his various screaming fits were a consistent source of interest for the audience).

Conversely, some of my fellow theater-goers were enraged by how hackneyed the film turned out to be. A friend of mine’s thoughts were filled with some choice four-letter words not suitable for print. Whereas I left the theater craving the kind of shrewdness and satirical bite one gets from “The Stepford Wives,” Fana Schoen ’24 felt that Wilde’s fundamental misinterpretation of the script is where the film went awry. While Wilde told Variety back in August that the film should focus on female pleasure, Schoen disagrees.

“She thinks it’s about female pleasure,” Schoen said. “But it’s actually about how female pleasure at the hands of a man [can be] unattainable.” Fellow audience member Andres Angeles-Paredes ’24 thought that the film was a tame disappointment.

“It felt like one really long, drawn out ‘Black Mirror’ episode,” Angeles-Paredes said.

After the screening, we all laughed and gasped and shrugged off the story’s inconsistencies. Maybe after sitting in that theater for over two hours, we were just happy to finally recount to each other our favorite plot implausibilities or moments of divine scenery-chewing.

I don’t want to simply write off  “Don’t Worry Darling” as something derivative of far better-realized works on the failures of suburban containment. It certainly is, but the more I write about it, and the more I shamelessly bring it up while talking to my friends, and the more I dream about those nightmarish Ziegfeld chorus girls that shuffle through Alice’s hallucinations, I start to feel blessed to have stumbled upon a movie simultaneously so confident in its subversion yet so miraculously flawed and hollow.

“Don’t Worry Darling” and the media storm it has ignited makes for great water cooler talk, despite those rumors of behind-the-scenes drama being largely unfounded. I think I want to see it five more times, if only to see Florence Pugh go haywire while Styles awkwardly pirouettes to a brassy cover of a Benny Goodman song. Maybe I’ll see it six more times. Maybe by then, that missing comma in the title will finally appear.

Vincent Langan can be reached at vlangan@wesleyan.edu.